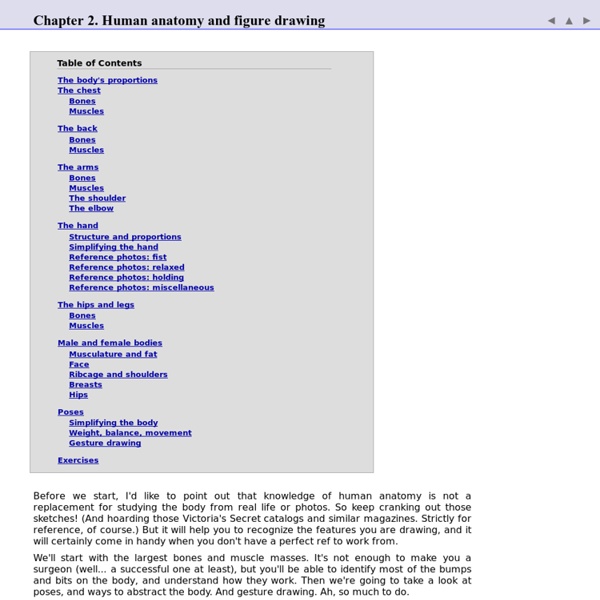 Chapter 2. Human anatomy and figure drawing Before we start, I'd like to point out that knowledge of human anatomy is not a replacement for studying the body from real life or photos. We'll start with the largest bones and muscle masses. I would also like to apologize in advance for using the Latin names of the bones and muscles. (All illustrations in this chapter are referenced from photos that were taken from large distances, x-ray images, and [Gold], [Gray], and [Barc]) Figure 2.1. The human body is usually measured in units of heads. Unless you are drawing an adult that is standing up straight, you can't use this diagram directly. Arms are 3½ heads long.When the arms are hanging down, the elbows line up with the bottom of the ribcage, and the fingertips reach halfway the upper leg.The navel is positioned roughly halfway between the nipples and the crotch, and halfway between the bottom of the ribcage and the top of the pelvis. Related:  Tutorial

How Things Work | Bozgo Posted by admin on Dec 28, 2012 in Entertainment | 27 comments For many thing that we all day see in our lives, we don’t know how some of that things work. Here you can see how things really work. How a Zipper Works Illustrating Pi: Unrolling a Circle’s Circumference How a Pill Press Works How Walschaerts Valve Gear in Steam Locomotives Works How a Caliper Works How a Radial Engine Works How the Geneva Drive Works How a Hypotrochoid is Made How an Alpha Stirling Engine Works How a Sewing Machine Works How to Draw a Yin Yang Symbol Using Circles

UNDERSTANDING ANATOMY: part I by FOERVRAENGD on DeviantArt Фотоблоги How To Draw A Wave | Club Of The Waves This art tutorial, kindly donated by surfing comic strip illustrator and surf artist Bob Penuelas covers how to draw a wave the Wilbur Kookmeyer way! If you're like me, then you've probably spent a lot of time in high school class daydreaming and doodling a thousand perfect cartoon waves in your notebook. It's safe to say that ninety percent of us surfers have a habit of scribbling perfect waves whenever a pencil is in our hands. Hopefully the following pointers will help you change your throw-away wave doodles into actual compelling artwork that you want to keep forever. Remember, there are millions of ways to draw a wave and hopefully with these simple pointers you'll find a million more. So, have fun. Drawing a basic wave The following illustrations and captions by Bob Penuelas take you through the basic steps of drawing a wave… Step 1 Sketch in the basic shape of the curl, spray, foam and base of the wave. Step 2 Step 3 Step 4 Add the rest of the flow lines. Step 5 Step 6 Tips… Paddler's view

How To Draw Hands Tutorials So everybody knows that the hands and the fingers are one of the hardest things to draw. So here is a personal collection of different hand references, hope to enjoy it and never stop practice. Hogarth hand poses from Iron Giant (middle of page) Mickey Mouse Hand Model Sheet by Les Clark ca. 1932 Merlin hand poses via Deja View Hand drawing tut by uchuucacahuate on deviantart. Excellent hand tutorial by alexds1 on deviantart.com Mr. Useful collection of hand poses by Chrissy Fellmeth Collection of female hand poses by artrush73′s Study of the hand in minimal style

How to Draw the Head From Any Angle The Basic Forms To draw the head from any angle you must first understand its basic structure. Look past all the distracting details and visualize the underlying forms. This ability to simplify can be applied to the features of the face, but when starting the drawing you could look even further. Ignore even the features and simplify to the most basic form of the head. The head deconstructed into its basic forms, is a sphere as the cranium and a block as the jaw and cheek bones. A Sphere as the Cranium The sides of the head are flat, so we can slice off a piece from both sides of the ball. A Block as the Jaw and Cheek Bones Attach the shape of the jaw. Constructing From Any Angle Step 1 – Determine the angle of the ball The angle of the head is established at the very beginning of the drawing with the ball. X Axis - The up and down tilt is established by the angles of the horizontal and vertical lines in the oval. Step 2 – Find the thirds Step 3 – Add the jaw Step 4 – Add the features

Virtual Lighting Studio - Iluminación interactiva de retrato The ambient light represents the light coming from the studio environment. You can turn it on or off and change its color and intensity. If you're lost and need some help, click here. But you probably know that... This is a schematic view of the studio. These are all the available models for lighting. These slots are used to capture your light setups. You can save a picture of your capture on your device by using the "Save As..." command of your browser on the capture thumbnails. This button is used to share or bookmark your current settings. This is the main view which displays your lit subject as seen through your camera. The garbage is used to clear your captured light setups. Here you can turn on or off your lights. The solo button enables you to temporarily visualize the effect of a single light in your setup. A gel can be added on a light to change the light color. This displays the intensity of the light. Use your light bare or use one of the modifiers in this list.

Cours et Formations en Vidéo 100% Gratuits Excavating Bedrock: Reminiscences of “The Flintstones” | Hogan's Alley John Province talks to some of the key architects of the modern Stone Age family. When you’re with the Flintstones, you’ll have a yabba-dabba-doo time! Note : This article originally appeared in Hogan’s Alley #9. An early character sheet (click to enlarge) The dawn of a new century marks the arrival of middle age for The Flintstones, one of television’s most enduring families. The Flintstones remained the most financially successful network animated franchise for three decades, until the appearance of The Simpsons . Early drawings Establishing a trend still flourishing in later programs such as The Muppets , The Simpsons and King of the Hill , the era’s top Hollywood celebrities, such as Tony Curtis and Ann-Margret, guest-starred and provided voices for animated versions of themselves. Some animation historians speculate that without The Flintstones there may have been no animated Peanuts specials, no How the Grinch Stole Christmas and certainly no Simpsons . Ed Benedict Gene Hazelton Shaw!

Lackadaisy Expressions Boy, I didn't know what I was getting myself into when I started this. I've had requests for some sort of expressions tutorial dating back a while now, so I figured, "Sure! I can explain expression drawing...and it'll be way better than all those tutorials out there that are nothing but charts of generic expressions. Yeah! Just give me a day or two to whip something up..." Um. Anyway, I found all I could really do was try to explain ways to teach yourself...and then add some pictures. Per-Looks