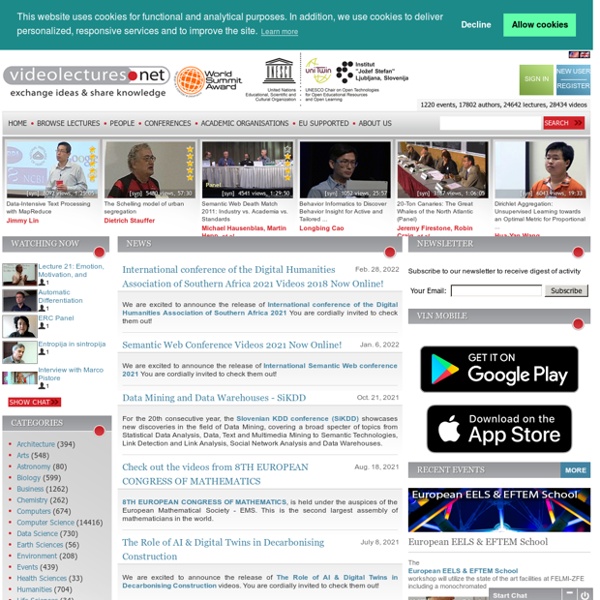 Best0fScience ... Largest Sky Map Revealed: An Animated Flight Through the Universe. The first public data release from BOSS, the Baryon Oscillation Spectroscopic Survey. ARKive - Discover the world's most endangered species Wildscreen's Arkive project was launched in 2003 and grew to become the world's biggest encyclopaedia of life on Earth. With the help of over 7,000 of the world’s best wildlife filmmakers and photographers, conservationists and scientists, Arkive.org featured multi-media fact-files for more than 16,000 endangered species. Freely accessible to everyone, over half a million people every month, from over 200 countries, used Arkive to learn and discover the wonders of the natural world. Since 2013 Wildscreen was unable to raise sufficient funds from trusts, foundations, corporates and individual donors to support the year-round costs of keeping Arkive online. Therefore, the charity had been using its reserves to keep the project online and was unable to fund any dedicated staff to maintain Arkive, let alone future-proof it, for over half a decade.

100 Free Foreign Language Classes Online March 1st, 2010 If you have always wanted to learn a language but were too put off by the high cost associated with most classes, then take a look at all these great opportunities to learn a foreign language online, at no cost to you. With so many learning opportunities online, it is a shame not to take advantage of all that you can, so be sure to spend some time with these classes. Whether you want to learn one of the major world languages or want something a little less popular, there are sure to be lessons here to help you start to speak whatever language you are interested in learning. French If you want to learn French, no matter your experience level, then check out these free classes.

6 Companies Aiming to Digitize the Textbook Industry The world's readers purchased an estimated $966 million of ebooks in 2010, and Amazon has been selling more ebooks than paper books since January. But students have yet to catch on to the digital book revolution with the same fervor. A 2010 study by OnCampus Research found that 74% of college students surveyed still prefer to use a printed textbook. Where some see non-adopters, others see untapped markets, and thus large and small players alike have long been targeting the digital textbook niche. Here are some of the ways they're looking to get students to trade their print for pixels.

Must Watch Documentaries About The U.S. Real Scientific Evidence of Controlled Implosion "The preconceived notion of NIST is that there's no evidence for explosives, as in there is no point in looking. That is the most unscientific thing which you can possibly think of. Free Digital Textbook Initiative About Us Additional Options "From government to non-profit organizations, teachers to textbook publishers, we all have a role to play in leveraging 21st century technology to expand learning and better serve California's students, parents, teachers and schools. This initiative will ensure our schools know which digital textbooks stand up to California's academic content standards - so these cost-effective resources can be used in our schools to help ensure each and every student has access to a world-class education." - Governor Schwarzenegger

2tor Raises $32.5 Million Series C To Make Online Education Great “One reason online education isn’t that good is I don’t think it is trying to be that good,” says John Katzman, the CEO of 2tor, an online education startup that is trying to break that mold. The company, headquartered in New York City’s Chelsea Piers, just raised a $32.5 million series C financing, led by Bessemer Venture Partners. All of its existing investors—Highland Capital, Redpoint, Novak Biddle, City Light—re-upped. Since it was founded in 2008, 2Tor has raised a total of $65 million. 100 Incredible Lectures from the World’s Top Scientists Posted on Thursday June 18, 2009 by Staff Writers By Sarah Russel Unless you’re enrolled at one of the best online colleges or are an elite member of the science and engineering inner circle, you’re probably left out of most of the exciting research explored by the world’s greatest scientists. But thanks to the Internet and the generosity of many universities and online colleges, you’ve now got access to the cutting edge theories and projects that are changing the world in this list below.