A Fed whistleblower on Goldman's conflicts² ProPublica’s Jake Bernstein reports on the intriguing tale of Carmen Segarra, a former Goldman Sachs bank examiner at the New York Federal Reserve who was fired for determining—and then insisting, after being told from superiors to say otherwise—that the bank’s conflict-of-interest policies were sorely lacking. 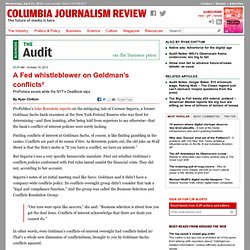 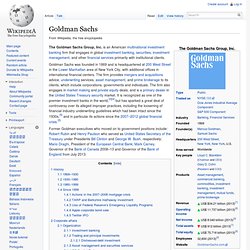 Goldman Sachs was founded in 1869 and is headquartered at 200 West Street in the Lower Manhattan area of New York City, with additional offices in international financial centers. The firm provides mergers and acquisitions advice, underwriting services, asset management, and prime brokerage to its clients, which include corporations, governments and individuals. The firm also engages in market making and private equity deals, and is a primary dealer in the United States Treasury security market. Former Goldman executives who moved on to government positions include: Robert Rubin and Henry Paulson who served as United States Secretary of the Treasury under Presidents Bill Clinton and George W. History[edit] Education Management Corporation - Home. A vanity plate for an admissions director at EDMC's Online Higher Education Division in Phoenix. With Goldman's Foray Into Higher Education, A Predatory Pursuit Of Students And Revenues.

Education Management Corp. was already a swiftly growing player in the lucrative world of for-profit higher education, with annual revenues topping $1 billion, but it had its sights set on industry domination. So, five years ago, the Pittsburgh company's executives agreed to sell its portfolio of more than 70 colleges to a trio of investment partnerships for $3.4 billion, securing the needed capital for an aggressive national expansion. One of the new partners brought an outsized reputation for market savvy, deep pockets and a relentless pursuit of profits -- the Wall Street goliath, Goldman Sachs. After the deal closed and Goldman became a partner, employees soon noticed a drastic shift in culture. 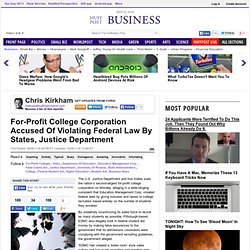 Teresa Sullivan Resigns From UVa: Complete Coverage - Leadership & Governance. The controversy over the unexpected removal of the University of Virginia's president has reached a conclusion at Tuesday's Board of Visitors meeting, where board members voted unanimously to reinstate the former president. 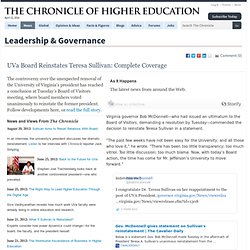 Follow developments here, or read the full story. News and Views From The Chronicle August 20, 2012: Sullivan Aims to 'Reset' Relations With Board. The University of Virginia and the Moneychangers in the Temple - The Edge of the American West. The President of the University of Virginia, Teresa Sullivan, was forced out last week, after mere moments on the job. 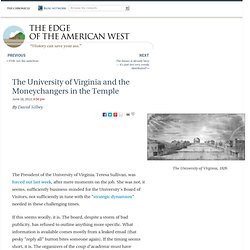 She was not, it seems, sufficiently business-minded for the University’s Board of Visitors, not sufficiently in tune with the “strategic dynamism” needed in these challenging times. If this seems woolly, it is. The board, despite a storm of bad publicity, has refused to outline anything more specific. What information is available comes mostly from a leaked email (that pesky “reply all” button bites someone again). David Karpf: UVA Board's Lazy Business Sense. The University of Virginia scandal is ongoing. 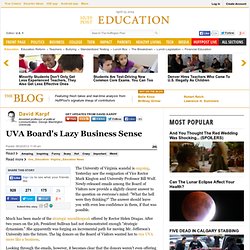 Yesterday saw the resignation of Vice Rector Mark Kington and University Professor Bill Wulf. Newly-released emails among the Board of Visitors now provide a slightly clearer answer to the question on everyone's mind: "What the hell were they thinking? " The answer should leave you with even less confidence in them, if that was possible. Much has been made of the strategic mumblespeak offered by Rector Helen Dragas. WP: Tumult continues at U-Va. Some faculty members said they would not work with the interim president and criticized him for accepting the post. 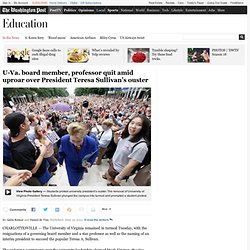 Leaders of the 16-member governing board have labored to present a united front in the decision to remove Sullivan, who resigned June 10 in the face of seemingly overwhelming opposition on the panel. But board members have found few public supporters, and an 11-hour session to name Sullivan’s successor exposed internal rifts.

Carl P. Zeithaml, dean of the McIntire School of Commerce, was named to the interim post early Tuesday on a 12-1 vote, with two members abstaining and one absent. On Tuesday, Gov. University of Phoenix to Close 115 Locations. University of Phoenix’ plot to corner the cheap education market. The University of Phoenix played a key role in defeating legislation that would have allowed community colleges in Arizona to offer low-priced bachelor’s degree programs, interviews and state records show. 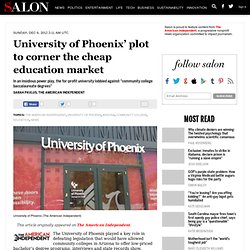 The for-profit college, which is one of the state’s biggest employers, provided research and political muscle for a multi-year lobbying campaign against “community college baccalaureate degrees” – out of concern that those programs would undercut its business model. For-profit schools and community colleges generally serve the same working, non-traditional student demographic, but tuition rates at community colleges are often much lower. 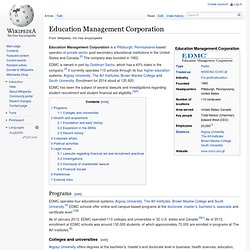 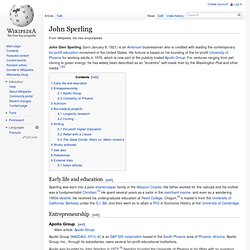 His fortune is based on his founding of the for-profit University of Phoenix for working adults in 1976, which is now part of the publicly traded Apollo Group. For ventures ranging from pet cloning to green energy, he has widely been described as an "eccentric" self-made man by the Washington Post and other media.[1][2] Early life and education[edit] Jack Welch. John Francis "Jack" Welch, Jr. (born November 19, 1935) is an American business executive, author and chemical engineer. Jack Welch (jack_welch) sur Twitter. Mark DeFusco (drmarkdefusco) sur Twitter. Michael K. Clifford. Michael K. Clifford is an American businessman who is credited with leading the first regionally accredited non-profit university to convert to a for-profit company in American history. He is viewed by some as an education entrepreneur, finance strategist, and catalyst for creating high growth education companies, specifically in the online education sector.

Michael K. Clifford (MKClifford) sur Twitter. Barmak Nassirian (BarmakN) sur Twitter. Willetts seeks private finance for overseas expansion. The universities and science minister has appealed to private investors to support overseas expansion for UK universities and stated that investment bank Goldman Sachs is “keen to investigate this possibility”. David Willetts delivered a speech on international higher education at the Goldman Sachs-Stanford University Global Education Conference on 20 June. His call for universities to seek alternative financing for expansion overseas comes amid a drive for every government department to identify sources of economic growth. The minister is also seeking ways for UK universities to maximise the number of overseas students they teach abroad.

The government’s tougher immigration controls threaten to cut the number of students able to enter the UK for study at universities. Mr Willetts said: “Our universities are internationally recognised: they are a great British brand. “Last year 400,000 overseas students came to the UK to study,” Mr Willetts said. John.morgan@tsleducation.com. Goldman Sachs and the privatisation of the university. University of Phoenix Patents Adaptive Activity Stream for Its Learning Platform. Michael Lewis: Did Goldman Sachs Overstep in Criminally Charging Its Ex-Programmer? Van klant naar product.