Collection Section 1 - Introduction to AI. History of Artificial Intelligence. Some of the earliest stories written by mankind were creation stories, often involving the creation of life by a supreme being. 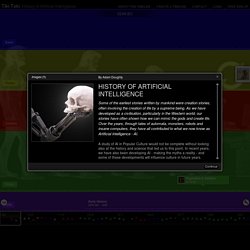 As we have developed as a civilisation, particularly in the Western world, our stories have often shown how we can mimic the gods and create life. Over the years, through tales of automata, monsters, robots and insane computers, they have all contributed to what we now know as Artificial Intelligence - AI. A study of AI in Popular Culture would not be complete without looking also at the history and science that led us to this point. In recent years, we have also been developing AI - making the myths a reality - and some of these developments will influence culture in future years. This timeline will look at a number of different strands: 1 - Primarily, it is about CULTURE and the stories, music, games, poetry and film that have developed because of our pursuit of AI. 2 - The reasons we have such a rich culture around this subject is because of our HISTORY. 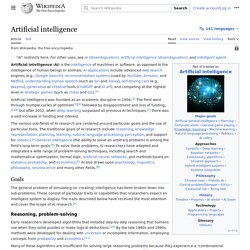 The distinction between the former and the latter categories is often revealed by the acronym chosen. 'Strong' AI is usually labelled as AGI (Artificial General Intelligence) while attempts to emulate 'natural' intelligence have been called ABI (Artificial Biological Intelligence). Leading AI textbooks define the field as the study of "intelligent agents": any device that perceives its environment and takes actions that maximize its chance of successfully achieving its goals.[3] Colloquially, the term "artificial intelligence" is often used to describe machines (or computers) that mimic "cognitive" functions that humans associate with the human mind, such as "learning" and "problem solving". 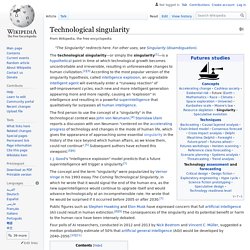 I. J. Good's "intelligence explosion" model predicts that a future superintelligence will trigger a singularity.[7] Four polls of AI researchers, conducted in 2012 and 2013 by Nick Bostrom and Vincent C. Background[edit] Intelligence explosion[edit] I. ... Philosophy of Mind: Brains, Consciousness, and Thinking Machines. Nothing in the universe is more mysterious than the inner workings of the human mind. 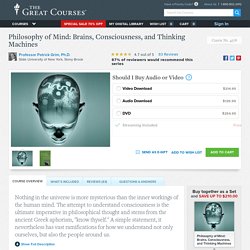 The attempt to understand consciousness is the ultimate imperative in philosophical thought and stems from the ancient Greek aphorism, "know thyself. " A simple statement, it nevertheless has vast ramifications for how we understand not only ourselves, but also the people around us. AI for Dummies // FABERNOVEL. Straight to the point, we should first give an overall definition of what artificial intelligence is, right? 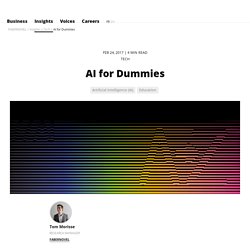 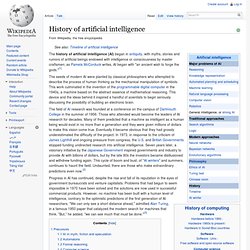 " The seeds of modern AI were planted by classical philosophers who attempted to describe the process of human thinking as the mechanical manipulation of symbols. This work culminated in the invention of the programmable digital computer in the 1940s, a machine based on the abstract essence of mathematical reasoning. This device and the ideas behind it inspired a handful of scientists to begin seriously discussing the possibility of building an electronic brain.

The field of AI research was founded at a conference on the campus of Dartmouth College in the summer of 1956. Those who attended would become the leaders of AI research for decades. Precursors[edit] AI in myth, fiction and speculation[edit] Automatons[edit] Formal reasoning[edit]