Theconversation. Studies have long shown that a college student’s odds of achieving financial security and a better quality of life improve when he or she earns a degree. 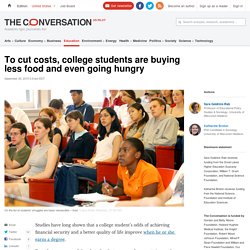 But what are some of the obstacles that prevent degree attainment? At the Wisconsin HOPE Lab, we study the challenges that students from low- and moderate-income households face in attaining a college degree. Chief among these are the many hurdles created by the high price of college. Paying the price of attending college, we find, changes who attends and for how long, as well as the college experience itself – what classes students take, the grades they earn, the activities in which they engage and even with whom they interact.

Our recent research shows an alarming trend on college campuses: an increasing number of students tell us that they are struggling in college, sometimes even dropping out, because they can’t afford enough of life’s basic necessity – food. College students are without food Now, let’s look at our research findings. Content Curation & Content Marketing Software. More lower-income students going to university despite tuition fees. The number of students securing degree places at UK universities and colleges topped half a million for the first time in 2014, with 512,400 people gaining places and a rise of 10% in those from the poorest households. 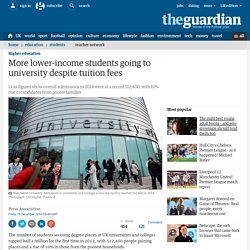 Universities are making record levels of offers to would-be students amid intense competition to attract good candidates, official figures from the Ucas admissions service suggest. The number gaining places was up by nearly 17,000 students (3.4%) compared with last year and there was also a rise in the number of UK students accepted – up 3.2% to 447,500 this year compared with 2013. Despite fears that the introduction of tuition fees would discourage less wealthy students to apply, the figures show that the poorest young people are now over 10% more likely to go to university than they were last year and a third more likely than five years ago.

The data also shows wide gaps between men and women, and differences according to where applicants live. Student loan system 'worst of all worlds' The long-term consequences of the government’s changes to funding of England’s universities have been called into question by an influential thinktank. 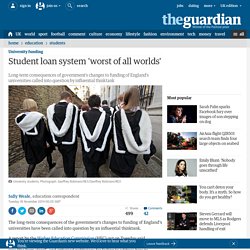 A report by the Higher Education Commission (HEC) out on Tuesday said measures taken by the coalition had put the sector on a long-term footing that was “far from clear”, and criticised politicians for failing to address how to safeguard higher education amid “significant and uncertain future liabilities”. Labour seized on the report, condemning the coalition’s “experiment” with higher education, and accusing it of putting the system on “the road to ruin”. Dr Ruth Thompson, the nine-month inquiry’s co-chair, said: “We have at present a funding system that represents the worst of both worlds, where all parties feel they are getting a bad deal. The HEC had “significant concern” about growing levels of graduate debt: post 2012, students will graduate with an average £44,000 student debt.

. * Don’t sell the student loan book to fund HE. Tuition bills loom large for £9,000-a-year tertiary students. Callum Cant was a 16-year-old schoolboy when students took to the streets in 2010 in the biggest protest for a generation. 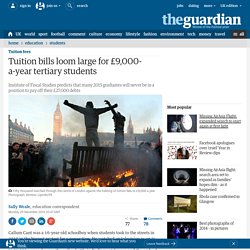 He watched on television as up to 50,000 marched through the centre of London against the trebling of tuition fees to £9,000 a year; he saw the police kettle in Parliament Square and the ambush of Conservative party offices at Millbank and he was strangely moved by what he saw. “These people were fighting for a future that was not theirs. They were fighting for my future.” It was a powerful protest, but it changed little. Callum is proof of that. Callum, who is in the final year of an English literature degree at Warwick University, is more fortunate than many of his peers. “You can see the figures,” says Callum, scrunching his face as he tries to remember when he signed for his loan. Nick Clegg: raising tuition fees has not deterred poor from going to university.

Nick Clegg has defended the rise in tuition fees to a maximum of £9,000 a year as he prepared to become the villain of a large student demonstration in London. 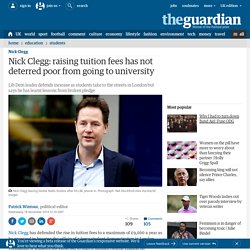 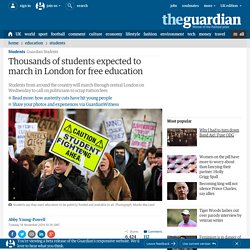 The demonstration, organised by the National Campaign Against Fees and Cuts (NCAFC) and the Student Assembly Against Austerity, is expected to be the biggest student protest in four years. Students will travel to London from cities around the UK, including Aberdeen, Glasgow, Newcastle, Leeds and Sheffield. Student protest over tuition fees ends in scuffles with police.