T'ai Chi South Wales. The Li (Lee) Style of Tai Chi Kungfu. This is the symbol of Li (Lee) Family Style T'ai Chi. ( The male seahorse incubates and gives birth to its offspringrepresenting a balance of Yin and Yang. ) Given the history of China, some 3,000 years more than the UK and considerably longer than most European cultures, it is hardly surprising that such wide and diverse Arts and inventions have come from it. 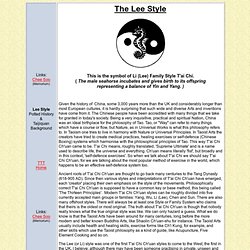 The Chinese people have been accredited with many things that we take for granted in today's society. Being a very inquisitive, practical and spiritual Nation, China was an ideal birthplace for the philosophy of Tao. Tao, or "Way" can refer to many things which have a course or flow, but Nature, as in Universal Works is what this philosophy refers to. In Taoism one tries to live in harmony with Nature or Universal Principles. Introducing the Lee Form of tai chi. Tai Chi in itself is has no single 'method', but rather a number of different styles that have evolved along with its growth. 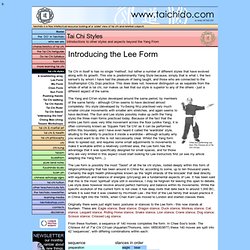 This site is predominantly Yang Style because, simply that is what I, the two sensei's by whom I have had the pleasure of being taught, and those who are connected to the Southampton City Dojo practice. This does does not, however distinguish us as separate from the whole of what is tai chi, nor makes us feel that our style is superior to any of the others - just a different aspect of the same.

The Yang and Ch'en styles developed around the same period, by members of the same family - although Ch'en seems to have declined almost completely. Wu style (developed by Yu-Seong Wu) practised very much smaller circular movements with smaller arm stretches, and again seems to have declined. The Sun and Lee styles possibly make up (with the Yang style) the three main forms practiced today. From these fourteen, a sequence of 140 moves completes the form. 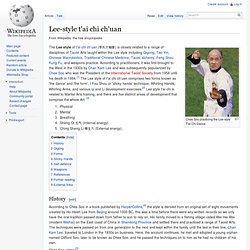 According to practitioners, it was first brought to the West in the 1930s by Chan Kam Lee and was subsequently popularized by Chee Soo who was the President of the International Taoist Society from 1958 until his death in 1994.[1] The Lee style of t'ai chi ch'uan comprises two forms known as 'the dance' and 'the form', I Fou Shou or 'sticky hands' technique, Whirling Hands, Whirling Arms, and various qi and Li development exercises.[2] Lee style t'ai chi is related to Martial Arts training, and there are five distinct areas of development that comprise the whole Art: [3] PhysicalMentalBreathingSheng Qi 生气 (Internal energy)Ching Sheng Li 精生力 (External energy). History[edit] Tai Chi For Beginners - Tai Chi for beginners. LFA Tai Chi.

T'ai chi ch'uan. Medical research has found evidence that t'ai chi is helpful for improving balance and for general psychological health, and that it is associated with general health benefits in older people.[2] Overview[edit] . 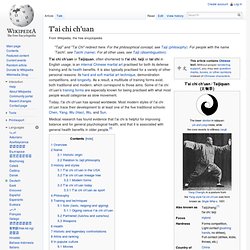 T'ai chi ch'uan theory and practice evolved in agreement with many Chinese philosophical principles, including those of Taoism and Confucianism. T'ai chi ch'uan training involves five elements, taolu (solo hand and weapons routines/forms), neigong & qigong (breathing, movement and awareness exercises and meditation), tuishou (response drills) and sanshou (self defence techniques). While t'ai chi ch'uan is typified by some for its slow movements, many t'ai chi styles (including the three most popular – Yang, Wu, and Chen) – have secondary forms with faster pace. It is purported that focusing the mind solely on the movements of the form helps to bring about a state of mental calm and clarity. Some other forms of martial arts require students to wear a uniform during practice.