Serhat Tanyolacar. Serhat tanyolacar (@artserhat) Serhat tanyolacar on Twitter: "Right now I apologize for the fear and pain I caused and there is no word to explain how I feel at this moment" Mason shares UI's response to Pentacrest art display. (Editor's Note: Following is a message that was sent to the campus community on Sunday, Dec. 7.) 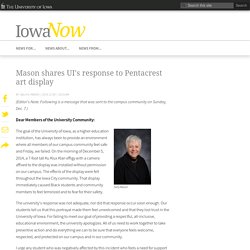 Dear Members of the University Community: The goal of the University of Iowa, as a higher-education institution, has always been to provide an environment where all members of our campus community feel safe and Friday, we failed. On the morning of December 5, 2014, a 7-foot tall Ku Klux Klan effigy with a camera affixed to the display was installed without permission on our campus. The effects of the display were felt throughout the Iowa City community.

That display immediately caused Black students and community members to feel terrorized and to fear for their safety. The university's response was not adequate, nor did that response occur soon enough. I urge any student who was negatively affected by this incident who feels a need for support to consider contacting the University Counseling Service at 335-7294. Please join me in the important work ahead. Mason shares UI's response to Pentacrest art display. KKK display frightens students on UIowa campus. Corrections and clarifications: An earlier version of this story did not include quoted information from sophomore Bob Nettleton that made clear his position with regard to the KKK. 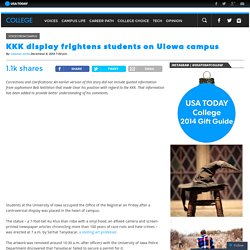 That information has been added to provide better understanding of his comments. Artist Comments About UI Sculpture. Controversial Statement Prompts UI Response. Lexington, KY local and state news by the Lexington Herald-Leader. Public art on UI Pentacrest displaying haunting reminders to racism removed by police. A controversial public art piece stood less than four hours on the University of Iowa Pentacrest before it was removed amid public protest. 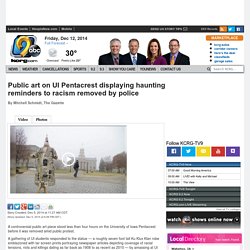 A gathering of UI students responded to the statue — a roughly seven foot tall Ku Klux Klan robe emblazoned with tar screen prints portraying newspaper articles depicting coverage of racial tensions, riots and killings dating as far back as 1908 to as recent as 2010 — by amassing at UI President Sally Mason’s office in Jessup Hall before relocating to the Iowa Memorial Union’s Bijou Cinema to express outrage over the piece to UI officials including Vice President of Student Life Tom Rocklin and Georgina Dodge, the UI’s Chief Diversity Officer. “It almost seemed like getting spit in the face because we had a solidarity meeting in the exact same spot,” Ajose said. “I have hopes as an artist and as an activist that all the horrible events will trigger something positive,” Turkish born Tanyolacar said Friday morning before the statue was removed.

Black leaders at University of Iowa call for change after uproar over KKK art display. IOWA CITY, Iowa - The activism sparked by an art display depicting a Ku Klux Klan robe should be a catalyst to make the University of Iowa more welcoming to minorities, students and employees said Tuesday. 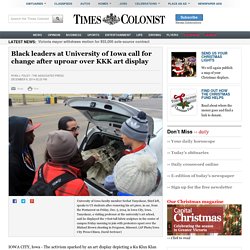 Many blacks and other students said they were traumatized by the 7-foot-tall KKK robe a visiting art professor displayed on campus without the university's permission Friday. During a meeting Tuesday of the UI African American Council, students, faculty and staff aired their opinions and called for progress on broader issues such as the recruitment, hiring and treatment of minority students and employees.

Graduate student Kayla Wheeler said she's had nightmares and been unable to sleep since Friday. Jose Orduna, an adjunct instructor in creative writing, said seeing the statue left him feeling afraid and alone, and he's since slept with chairs against the door of his home. "As an art object, this was an artistic failure as far as appropriating other people's pain," he said. University of Iowa artist makes statement espousing free speech. IOWA CITY — About 17 hours after publicly expressing his “sincere apologies” to the black community in Iowa City for what he called “my thoughtless action,” the University of Iowa artist who installed a Ku Klux Klan-robed sculpture on campus Friday issued a second statement to the general public espousing his view on the importance of free speech. 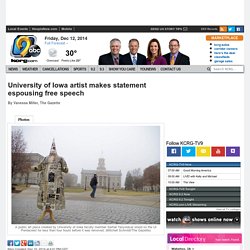 “I sincerely believe that freedom of speech is an essential part of all civil societies, and that public art is one of the most vital acts of free speech available to the civilian,” Serhat Tanyolacar, 38, wrote in the statement received by The Gazette about 6 p.m. Wednesday. Frustration over KKK statue: UI students share concerns at public forums. “It was a terrorist attack,” she said. 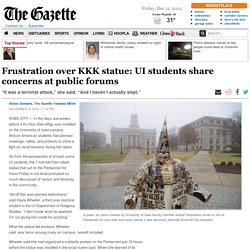 “And I haven’t actually slept.” Photos December 9, 2014 | 7:14 pm IOWA CITY — In the days and weeks before a Ku Klux Klan effigy was installed on the University of Iowa campus, African American students had planned meetings, rallies, and protests to shine a light on racial tensions facing the nation. To Serhat Tanyolacar. Thefire.org: U. of Iowa Censors, Apologizes for Art About Racism. By Susan Kruth December 9, 2014. 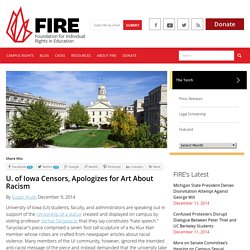 Serhat tanyolacar sur Twitter : "Reactivating the artifact in downtown Iowa City in about an hour.