Yale University. University Department of Anthropology. David Graeber. David Rolfe Graeber (/ˈɡreɪbər/; born 12 February 1961) is an American anthropologist, author, anarchist and activist who is currently Professor of Anthropology at the London School of Economics.[1] Specialising in theories of value and social theory, he was an assistant professor and associate professor of anthropology at Yale University from 1998 to 2007, although Yale controversially declined to rehire him.[2] From Yale, he went on to become a Reader in Social Anthropology at Goldsmiths, University of London from Fall 2007 to Summer 2013.[3] Graeber has been involved in social and political activism, including the protests against the 3rd Summit of the Americas in Quebec City in 2001 and the World Economic Forum in New York City in 2002. 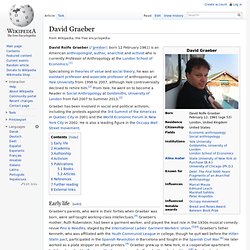 He is also a leading figure in the Occupy Wall Street movement. Early life[edit] Graeber graduated from Phillips Academy Andover in 1978 and received his B.A. from the State University of New York at Purchase in 1984. Academia[edit] Authorship[edit] @davidgraeber. Profs attend World Economic Forum. Yale officials and professors both presented and protested at the recently concluded World Economic Forum held in New York City. 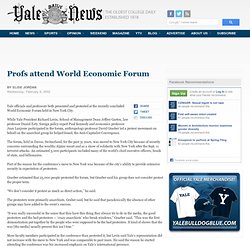 While Yale President Richard Levin, School of Management Dean Jeffrey Garten, law professor Daniel Esty, foreign policy expert Paul Kennedy and economics professor Jean Lanjouw participated in the forum, anthropology professor David Graeber led a protest movement on behalf on the anarchist group he helped found, the Anti-Capitalist Convergence. The forum, held in Davos, Switzerland, for the past 31 years, was moved to New York City because of security concerns surrounding the wealthy Alpine resort and as a show of solidarity with New York after the Sept. 11 terrorist attacks.

An estimated 3,000 participants included many of the world’s chief executive officers, heads of state, and billionaires. Part of the reason for the conference’s move to New York was because of the city’s ability to provide extensive security in expectation of protesters. YaleDailyNews: Graeber case stirs students. A small group of Yale students delivered a thick packet of letters to the Provost’s Office on Wednesday protesting the administration’s decision not to renew anthropology professor David Graeber’s contract — an issue that has provoked anxiety in the Anthropology Department after two other professors recently announced they will leave Yale this spring. 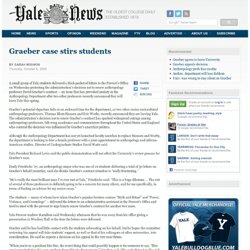 Graeber’s potential departure falls at an awkward time for the department, as two other senior sociocultural anthropology professors, Thomas Blom Hansen and Eric Worby, recently announced they are leaving Yale. The administration’s decision not to renew Graeber’s contract has sparked widespread outrage among anthropology professors, left-wing academics and commentators throughout the United States and England who contend the decision was influenced by Graeber’s anarchist politics. Yale President Richard Levin said the public demonstration will not affect the University’s review process for Graeber’s case.

YdN: Anthropology profs fear exodus. Just months after the Anthropology Department voted not to renew sociocultural anthropology professor David Graeber’s contract, rumors are swirling that the department may lose as many as six additional professors by the end of the academic year. 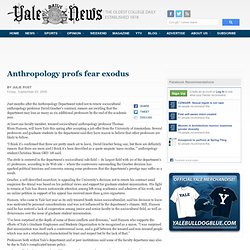 At least one faculty member, tenured sociocultural anthropology professor Thomas Blom Hansen, will leave Yale this spring after accepting a job offer from the University of Amsterdam. Several professors and graduate students in the department said they have reason to believe that other professors are likely to follow. “I think it’s confirmed that three are pretty much set to leave, David Graeber being one, but there are definitely rumors that there are more and I think it’s been described as a quote unquote ‘mass exodus,’” anthropology student Christina Moon GRD ’08 said. Graeber appeals decision. Sociocultural anthropology professor David Graeber, a self-described anarchist whose contract renewal was denied by the University last spring, has formally appealed the decision amid suspicion the denial was based on his political views. 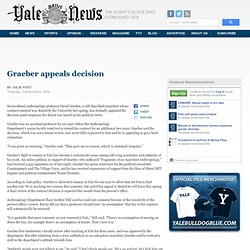 Graeber was an assistant professor for six years before the Anthropology Department’s senior faculty voted not to extend his contract for an additional two years. Graeber said the decision, which was not a tenure review, was never fully explained to him and he is appealing to get a fresh evaluation. Graeber agrees to leave University. Sociocultural anthropology professor David Graeber, a self-described anarchist whose contract was not renewed by the University last spring, announced Wednesday that he has withdrawn his petition to remain at Yale in exchange for a year’s paid sabbatical. 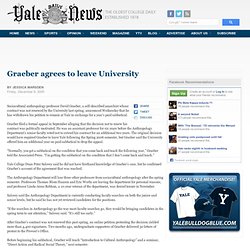 Graeber filed a formal appeal in September alleging that the decision not to renew his contract was politically motivated. He was an assistant professor for six years before the Anthropology Department’s senior faculty voted not to extend his contract for an additional two years. The original decision would have required Graeber to leave Yale following the Spring 2006 semester, but Graeber said the University offered him an additional year on paid sabbatical to drop the appeal. “Normally, you get a sabbatical on the condition that you come back and teach the following year,” Graeber told the Associated Press. “I’m getting the sabbatical on the condition that I don’t come back and teach.” Univ. was wrong to stay silent on Graeber. While the end of the semester usually brings with it a slew of final assignments, this year the University also received a withdrawal — that of anthropology professor David Graeber’s petition to remain at Yale. 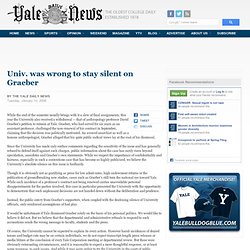 Graeber, who had served for six years as an assistant professor, challenged the non-renewal of his contract in September, claiming that the decision was politically motivated. An avowed anarchist as well as a famous anthropologist, Graeber alleged that his quite public radical views lay at the root of his dismissal. Since the University has made only surface comments regarding the sensitivity of the issue and has generally refused to defend itself against such charges, public information about the case has rarely risen beyond speculation, anecdotes and Graeber’s own statements. Instead, the public outcry from Graeber’s supporters, when coupled with the deafening silence of University officials, only reinforced assumptions of foul play.

NYT: When Scholarship and Politics Collided at Yale. Without Cause: Yale Fires An Acclaimed Anarchist Scholar. David Graeber, PhD, is an Assistant Professor of Anthropology at Yale University, and the author of Toward an Anthropological Theory of Value: The False Coin of Our Own Dreams and Fragments of an Anarchist Anthropology, among many other scholarly publications. 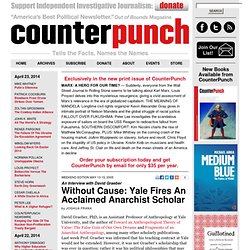 Last week Prof. Graeber was informed that his teaching contract at Yale would not be extended. However, it was not Graeber’s scholarship that was ever in question; rather it was his political philosophies that may have played a heavy hand in the administration’s unwarranted decision. Graeber, a renowned anarchist scholar, recently spoke with CounterPuncher JOSHUA FRANK about the fiasco. As one of our other favorite anthropologists David Price put it, this "is a ghastly look under the hood at how academic knowledge is manufactured at America’s ‘finest’ institutions.

" JOSHUA FRANK: Prof. JF: If I am not mistaken, you have been up for review at Yale before, correct? I’m definitely working with some union people now. David Graeber Fired From Yale Because of Politics. By Yvonne After a decision at a meeting convened by tenured faculty at the department of anthropology, Yale University, David Graeberâ€™s contract was not renewed. 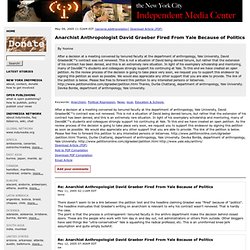 This is not a situation of David being denied tenure, but rather that the extension of his contract has been denied, and this is an extremely rare situation. In light of his exemplary scholarship and mentoring, many of Davidâ€™s students and colleagues strongly support his continuing at Yale. To this end we have created an open petition. As the review process of the decision is going to take place very soon, we request you to support this endeavor by signing this petition as soon as possible. We would also appreciate any other support that you are able to provide. 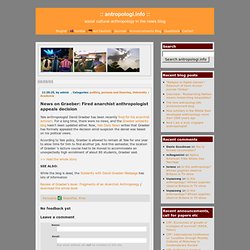 For a long time, there were no news, and the Graeber solidarity blog hasn't been updated either. Now, Yale Daily News writes that Graeber has formally appealed the decision amid suspicion the denial was based on his political views. According to Yale policy, Graeber is allowed to remain at Yale for one year to allow time for him to find another job. And this semester, the location of Graeber 's lecture course had to be moved to accommodate an unexpectedly high enrollment of about 80 students, Graeber said. >> read the whole story While the blog is dead, the Solidarity with David Graeber-Webpage has lots of information.

Graeber drops appeal, leaves Yale this spring. A-Infos (en) US, In Support of David Graeber. From a-infos@ainfos.ca Date Wed, 11 May 2005 23:54:11 +0300 Delivered-to ilan@ainfos.ca Delivered-to ainfos.ca-a-infos@mail.tuxic.nl Delivered-to ainfos.ca-a-infos-en@mail.tuxic.nl List-archive < List-help <mailto:a-infos-request@ainfos.ca? Subject=help> List-id a-infos.ainfos.ca List-post <mailto:a-infos@ainfos.ca> List-subscribe < <mailto:a-infos-request@ainfos.ca? Letter from Maurice Bloch, London School of Economics. Dear Colleagues, I have just heard about your decision to terminate the contract of Professor David Graeber. I hear this news with amazement and disbelief. I know Professor Graeber from several meetings at conferences but in no way am I a close personal friend of his. I am, however, a great admirer of his work. His contribution to the history and anthropology of Madagascar is of the very best and I say this, bearing in mind that he has been probably the severest critic of my own work.

His writings on anthropological theory are outstanding. I know nothing about the circumstances which have led you to your decision but I cannot believe that a university such as yours cannot cope with erratic behaviour or that it can afford to lose so extraordinarily talented a colleague, Yours Sincerely, Maurice Bloch, B.A. David Graeber. Zoom Met twee linkse intellectuelen uit de arbeidersklasse als ouders, groeide David Graeber in een coöperatief appartement in New York. Hij staat bekend als anarchist, activist en radicaal.

Originally chartered as the "Collegiate School", the institution traces its roots to 17th-century clergymen who sought to establish a college to train clergy and political leaders for the colony. In 1718, the College was renamed "Yale College" to honor a gift from Elihu Yale, a governor of the British East India Company. In 1861, the Graduate School of Arts and Sciences became the first U.S. institution to award the Ph.D.[5] Yale became a founding member of the Association of American Universities in 1900.

Yale College was transformed, beginning in the 1930s, through the establishment of residential colleges: 12 now exist and two more are planned. History[edit] A Front View of Yale-College and the College Chapel, Daniel Bowen, 1786. Early history[edit]