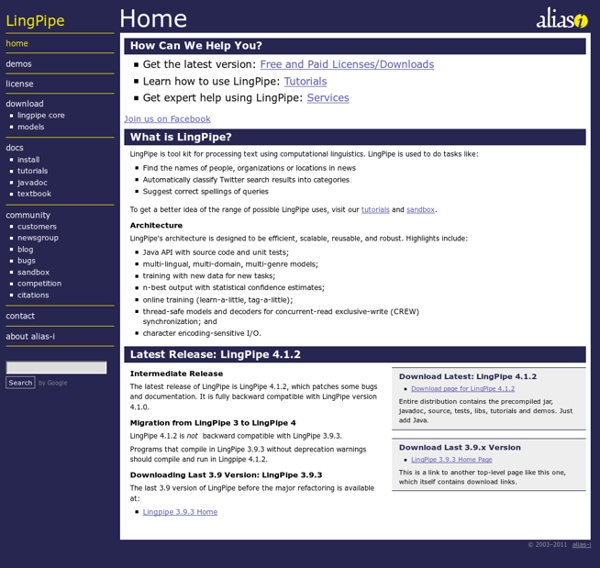 How Can We Help You? Get the latest version: Free and Paid Licenses/DownloadsLearn how to use LingPipe: Tutorials Get expert help using LingPipe: Services Join us on Facebook What is LingPipe? LingPipe is tool kit for processing text using computational linguistics. LingPipe is used to do tasks like: Find the names of people, organizations or locations in newsAutomatically classify Twitter search results into categoriesSuggest correct spellings of queries To get a better idea of the range of possible LingPipe uses, visit our tutorials and sandbox. Architecture LingPipe's architecture is designed to be efficient, scalable, reusable, and robust. Latest Release: LingPipe 4.1.2 Intermediate Release The latest release of LingPipe is LingPipe 4.1.2, which patches some bugs and documentation. Migration from LingPipe 3 to LingPipe 4 LingPipe 4.1.2 is not backward compatible with LingPipe 3.9.3. Programs that compile in LingPipe 3.9.3 without deprecation warnings should compile and run in Lingpipe 4.1.2.

The Stanford NLP (Natural Language Processing) Group About | Getting started | Questions | Mailing lists | Download | Extensions | Models | Online demo | Release history | FAQ About Stanford NER is a Java implementation of a Named Entity Recognizer. Named Entity Recognition (NER) labels sequences of words in a text which are the names of things, such as person and company names, or gene and protein names. It comes with well-engineered feature extractors for Named Entity Recognition, and many options for defining feature extractors. Included with the download are good named entity recognizers for English, particularly for the 3 classes (PERSON, ORGANIZATION, LOCATION), and we also make available on this page various other models for different languages and circumstances, including models trained on just the CoNLL 2003 English training data.

GENIA tagger home page - part-of-speech tagging, shallow parsing, and named entity recognition for biomedical text - What's New 20 Oct. 2006 A Review of the Neural History of Natural Language Processing This is the first blog post in a two-part series. The series expands on the Frontiers of Natural Language Processing session organized by Herman Kamper and me at the Deep Learning Indaba 2018. Slides of the entire session can be found here. This post will discuss major recent advances in NLP focusing on neural network-based methods.

The Illustrated BERT, ELMo, and co. (How NLP Cracked Transfer Learning) – Jay Alammar – Visualizing machine learning one concept at a time The year 2018 has been an inflection point for machine learning models handling text (or more accurately, Natural Language Processing or NLP for short). Our conceptual understanding of how best to represent words and sentences in a way that best captures underlying meanings and relationships is rapidly evolving. Moreover, the NLP community has been putting forward incredibly powerful components that you can freely download and use in your own models and pipelines (It’s been referred to as NLP’s ImageNet moment, referencing how years ago similar developments accelerated the development of machine learning in Computer Vision tasks).

Understanding and explaining Delta measures for authorship attribution Skip to Main Content Sign In Register Close Natural Language Processing is Fun! – Adam Geitgey This article is part of an on-going series on NLP: Part 1, Part 2, Part 3. You can also read a reader-translated version of this article in 普通话. Giant update: I’ve written a new book based on these articles! It not only expands and updates all my articles, but it has tons of brand new content and lots of hands-on coding projects. cluster package — NLTK 3.4 documentation This module contains a number of basic clustering algorithms. Clustering describes the task of discovering groups of similar items with a large collection. It is also describe as unsupervised machine learning, as the data from which it learns is unannotated with class information, as is the case for supervised learning. Annotated data is difficult and expensive to obtain in the quantities required for the majority of supervised learning algorithms. This problem, the knowledge acquisition bottleneck, is common to most natural language processing tasks, thus fueling the need for quality unsupervised approaches.

Semantics, not syntax, creates NLU – Pat Inc A scientific hypothesis starts the process of scientific enquiry. False hypotheses can start the path to disaster, as was seen with the geocentric model of the ‘universe’ in which heavenly bodies moved in circular orbits. It became heresy to suggest that orbits aren’t circular around the stationary earth, leading to epicycles. It’s a good story worth studying in school to appreciate how a hypothesis is critical to validating science.