Jeff Hawkins on how brain science will change computing 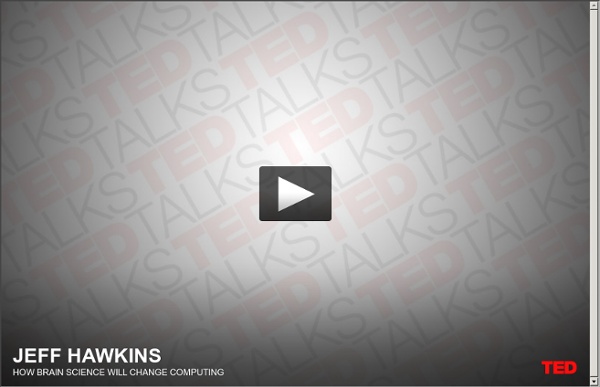 Jeff Hawkins Hawkins also serves on the Advisory Board of the Secular Coalition for America and offers advice to the coalition on the acceptance and inclusion of nontheism in American life.[3] Early life and career[edit] Hawkins grew up with an inventive family on the north shore of Long Island. Walking through doorways causes forgetting, new research shows Public release date: 18-Nov-2011 [ Print | E-mail Share ] [ Close Window ] Contact: Gabriel Radvansky gradvans@nd.edu 574-631-6473University of Notre Dame Hierarchical temporal memory Hierarchical temporal memory (HTM) is an online machine learning model developed by Jeff Hawkins and Dileep George of Numenta, Inc. that models some of the structural and algorithmic properties of the neocortex. HTM is a biomimetic model based on the memory-prediction theory of brain function described by Jeff Hawkins in his book On Intelligence. HTM is a method for discovering and inferring the high-level causes of observed input patterns and sequences, thus building an increasingly complex model of the world. Jeff Hawkins states that HTM does not present any new idea or theory, but combines existing ideas to mimic the neocortex with a simple design that provides a large range of capabilities.

11 Goal Hacks: How to Achieve Anything Goal-setting research on fantasising, visualisation, goal commitment, procrastination, the dark side of goal-setting and more… We’re all familiar with the nuts and bolts of goal-setting. We should set specific, challenging goals, use rewards, record progress and make public commitments (if you’re not familiar with these then check out this article on how to reach life goals).

Hierarchical Temporal Memory We've completed a functional (and much better) version of our .NET-based Hierarchical Temporal Memory (HTM) engines (great job Rob). We're also still working on an HTM based robotic behavioral framework (and our 1st quarter goal -- yikes - we're late). Also, we are NOT using Numenta's recently released run-time and/or code... since we're professional .NET consultants/developers, we decided to author our own implementation from initial prototypes authored over the summer of 2006 during an infamous sabbatical -- please don't ask about the "Hammer" stories. I've been feeling that the team has not been in synch in terms of HTM concepts, theory and implementation. We decided to spend the last couple of meetings purely focused on discussions concerning HTMs.

5 Ways To Hack Your Brain Into Awesomeness Much of the brain is still mysterious to modern science, possibly because modern science itself is using brains to analyze it. There are probably secrets the brain simply doesn't want us to know. But by no means should that stop us from tinkering around in there, using somewhat questionable and possibly dangerous techniques to make our brains do what we want. We can't vouch for any of these, either their effectiveness or safety.

Can a New Theory of the Neocortex Lead to Truly Intelligent Mach 77 Brain Hacks to Learn Faster, Deeper, and Better Source: Online Education Database If someone granted you one wish, what do you imagine you would want out of life that you haven't gotten yet? For many people, it would be self-improvement and knowledge. Redwood Center for Theoretical Neuroscience Improve Your Memory by Speaking Your Mind’s Language By learning the language your mind uses, you’ll be able to tap into your mind’s full potential and develop a remarkable memory. It’s easier than you think – and you’ll actually have fun doing it. Your Mind Thinks in Pictures Critical Thinking By Example 1.1 Two Conventions for Standardizing To standardize an argument is to break it down into its components in a manner that shows the logical relationships between the parts. An argument, in our technical sense, is a reason or reasons offered in support of a conclusion.