Pasta With Courgettes. Sichuan Chilli Oil. This is something that I always have on hand in my pantry. 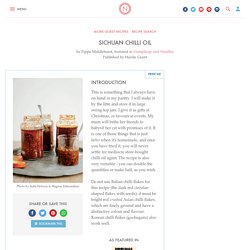 I will make it by the litre and store it in large swing-top jars. I give it as gifts at Christmas, or favours at events. My mum will bribe her friends to babysit her cat with promises of it. It is one of those things that is just better when it's homemade, and once you have tried it, you will never settle for mediocre store-bought chilli oil again. The recipe is also very versatile - you can double the quantities or make half, as you wish. 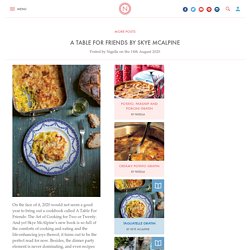 And yet Skye McAlpine’s new book is so full of the comforts of cooking and eating and the life-enhancing joys thereof, it turns out to be the perfect read for now. Besides, the dinner party element is never dominating, and even recipes rather more geared to larger numbers can often and easily be pared down to suit smaller gatherings.

Gemelli with Anchovies, Tomatoes and Mascarpone. Vodka Marinated Steak. Courgette Fritters. Spaghetti With Tuna, Lemon & Rocket. Lentils with Tamarind and Dates. Turkish Eggs. Squid Salad With Lime, Coriander, Mint and Mizuna. Spicy Scrag End Pie. Summer Rolls. Chicken Traybake With Bitter Orange and Fennel. Tagliatelle With Chicken From the Venetian Ghetto. Sicilian Pasta With Tomatoes, Garlic & Almonds. Coconut & Sambal by Lara Lee. I have eaten Indonesian food all too infrequently in my life, and have cooked it - thus far - only once, when acting as sous-chef to an Indonesian friend in Italy many decades ago, as he prepared a huge feast.

So I’m very excited to have Lara Lee’s Coconut & Sambal in my hands now. It’s a book that tells the story of the food, both through memories and evocative explanations, as it introduces us to the flavours and feel of the Indonesian kitchen, and explains not only how to cook the food, but how to eat it. It’s impossible to read it without being both inspired and very hungry! This is a book that’s just full of brio - from Coconut Beef and Peanut Stir-Fry, Chicken Rice Congee, Green Chilli Braised Duck, and Balinese Roasted Pork Belly, to Pandan and Coconut Cake, Thousand Layer Cake and Banana Fritters and, of course, the fiery sambals - the spicy relishes and condiments of the book’s title.

Pasta Risotto With Peas & Pancetta. Mandalay by MiMi Aye. There is so much to love in MiMi Aye’s wonderful Mandalay: Recipes & Tales from a Burmese Kitchen but, even before I got on to the recipes, I felt that a book that told me that in Burma people greet each other by asking whether they’ve eaten yet, belonged in my life. 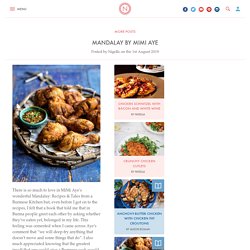 This feeling was cemented when I came across Aye’s comment that “we will deep-fry anything that doesn’t move and some things that do”. I also much appreciated knowing that the greatest insult that one could give a Burmese cook would be to say of a dish “it lacks oil”. And then there is the food: I long for the Pickled Ginger & Sesame Salad, the Golden Sticky Rice, the Coconut Chicken Noodles, the Mandalay Pork & Round Rice Noodles, the Meatball Curry, the Anchovy Dip, and so much more, but it is the Burmese Fried Chicken - or BFC - that goes straight to the top of my list, and just had to be the recipe I shared with you here.

Extract from Mandalay by MiMi Aye (Bloomsbury Absolute, £26). Photography © Cristian Barnett. Pasta With Courgettes. New Orleans Coleslaw. Smoked Cod and Cannellini Beans. Drunken Noodles. Chicken Teriyaki. Parmesan French Toast. Cauliflower And Cashew Nut Curry. White Bean Mash. Pasta With Courgettes. Old Rag Pie. MAKE AHEAD NOTE: The pie can be made 1 day in advance and kept in fridge. Pie can also be frozen at this stage, in which case cook from frozen, as Freeze Note. STORE NOTE: The pie is best on the day it is made, but leftovers can be stored in fridge, on a plate covered with clingfilm or in an airtight container, for up to 2 days. Slices can be reheated in an oven preheated to 150°C/130°C Fan/gas mark 2/300ºF for 15–30 minutes, until piping hot.

Cool for 5 minutes before serving (this will crisp up the filo again). FREEZE NOTE: Wrap tin tightly in a double layer of clingfilm and a layer of foil. Leftovers can also be frozen, tightly wrapped in a double layer of clingfilm and then put into a resealable bag or wrapped in foil, for up to 1 month. Butternut Squash With Pecans and Blue Cheese. Tex-Mex Cheese On Toast Recipe - olive magazine. Greek lamb pies with feta mash. Nigella Lawson's Noodles with Mushrooms and Mangetouts Recipe. Red Mullet With Sweet and Sour Shredded Salad.

Spanish Chicken With Chorizo and Potatoes. Moroccan Vegetable Pot and Couscous with Pine Nuts and Dill. Scallops on the Shell. Coxinha. Spiced and Superjuicy Roast Turkey. Turkey cooking times tend to seem quite short if you are used to the "standard" formula for calculating cooking times for poultry. 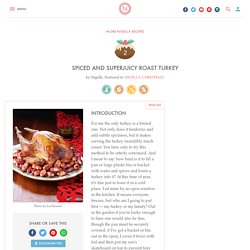 However we have all been overcooking turkeys for years and complaining how dry and sawdusty they are. The table below gives my suggested timings for turkey. The timings in the table are for a free-range turkey - these tend to have more fat than a lean mass-produced bird and the marbling of fat in the free-range turkey tends to conduct the heat faster meaning that it cooks more quickly. It also assumes that the turkey has been allowed to come up to room temperature before cooking (take the turkey out of the fridge 1-2 hours before you want to cook it) and that the turkey has no stuffing and is not trussed.

Alongside there must be Pie Insides (which is what my daughter has always called leeks in white sauce) and for ultimate gratification, roast potatoes although I usually use goose fat for roast potatoes, I feel the pork belly allows, indeed encourages, the substitution of lard. I'm not convinced that with all that fabulous crackling you do need roasties as well, but I like to provide what makes people happy. I have advised an overnight marinade, but if I'm making this (as I tend to) for Sunday supper, I often prepare it in the morning and leave it in the fridge loosely covered with baking parchment, or midday-ish and leave it uncovered in a cold place (but not the fridge) for a few hours. Read more As featured in. Warm Spiced Cauliflower and Chickpea Salad With Pomegranate Seeds. Nigella Lawson's Meatballs with Orzo. 1. 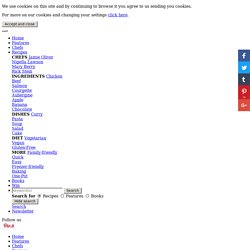 Line a large baking sheet with cling film, then put all the ingredients for the meatballs into a large bowl and mix together, gently, with your hands. Don’t overmix, as it will make the meatballs dense-textured and heavy. 2. Pinch out pieces of this mixture and roll between the palms of your hand to form meatballs that are somewhere between a cherry tomato and a walnut in size, putting them on your lined tray as you go. You should get about 30 meatballs. 3. 4. 5. Linguine With Chilli, Crab and Watercress. Soba Noodles With Sesame Seeds. Mozzarella With Crazy Gremolata. Chicken Traybake With Bitter Orange and Fennel. Chicken Teriyaki. Griddled Aubergines With Feta, Mint and Chilli. Vodka Marinated Steak. Red-Leaf, Fig and Serrano Ham Salad. Hummus With Seared Lamb and Toasted Pinenuts. Chickpeas With Rocket and Sherry.

Scallops and Chorizo. Linguine With Garlic Oil and Pancetta. Hasselback Potatoes. Nigella's Recipes. Sake Steak and Rice. For gluten free: use gluten free Dijon mustard instead of English mustard and tamari instead of soy sauce. Check also that the Worcestershire sauce is suitable as some brands contain malt vinegar (made with barley). The real thing to take from this, too, is the cooking method.

This easily translates to bigger cuts as in my quick-cook longrested fillet: when I've got people coming round and I'm not sure exactly when we'll be eating, I cook a large contrefilet or fillet of beef - about 2.25kg / 5lb for eight, or ten if you're a good carver. Old Fashioned Tomato Salad. Scallops With Thai Scented Pea Puree. Nigella's Recipes. Chicken With Spring Onions, Chilli and Greek Yogurt. Nigella's Recipes. Nigella's Recipes. Vietnamese Chicken and Mint Salad.

Mexican Scrambled Eggs. Spaghetti With Marmite. I came across this recipe in Anna Del Conte's memoirs, Risotto with Nettles. Now, there are so many recipes I could borrow from her, and many I have, but this is the one I have to show you here. She introduces it as hardly a recipe, but I wanted to include it because I haven't as yet found a child who doesn't like it. I know the combination of pasta and Marmite sounds odd to the point of unfeasibility, but wait a moment, there is a traditional day-after-the-roast pasta dish, in which spaghetti is tossed in stock, and I have eaten shortcut versions of this in Italy (recreated guiltlessly in my own kitchen) which use a crumbled stock cube, along with some butter, olive oil, chopped rosemary and a little of the pasta cooking water to make a flavoursome sauce for spaghetti.