Seared Salmon With Singapore Noodles. Charred Peppers and Fresh Corn Polenta with Soy-Cured Yolk. Meatballs with Orzo. Hummus With Seared Lamb and Toasted Pinenuts. Lime and Coriander Chicken. Cheesy Chilli. I can't count how often I find myself stirring a pan with some mince in it, day to day. 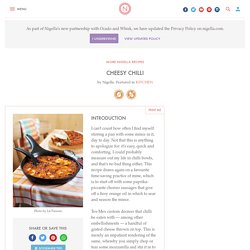 Not that this is anything to apologize for: it's easy, quick and comforting. I could probably measure out my life in chilli bowls, and that's no bad thing either. This recipe draws again on a favourite time-saving practice of mine, which is to start off with some paprika-piccante chorizo sausages that give off a fiery orange oil in which to sear and season the mince. Tex-Mex custom decrees that chilli be eaten with - among other embellishments - a handful of grated cheese thrown on top. This is merely an impatient rendering of the same, whereby you simply chop or tear some mozzarella and stir it in to the chilli in the pan, just long enough to let it melt into the meat. Sweet Potato, Ginger And Orange Soup. Pasta With Onions and Anchovies. Mellow Meatballs. Meatballs.

Noodles With Mushrooms and Mangetouts. Crumbed Sardine Sandwich. Sake Steak and Rice. For gluten free: use gluten free Dijon mustard instead of English mustard and tamari instead of soy sauce. Check also that the Worcestershire sauce is suitable as some brands contain malt vinegar (made with barley). The real thing to take from this, too, is the cooking method. This easily translates to bigger cuts as in my quick-cook longrested fillet: when I've got people coming round and I'm not sure exactly when we'll be eating, I cook a large contrefilet or fillet of beef - about 2.25kg / 5lb for eight, or ten if you're a good carver. This is expensive but easy. Heat the oven to gas mark 10/250°C/480°F and sit the naked joint - no fat encasing it and no larding - on a foil-lined tray.

New Orleans Coleslaw. Risotto Bolognese. Breakfast Bruschetta. Sesame Peanut Noodles. Chicken With Spring Onions, Chilli and Greek Yogurt. Lamb Cutlets With Mint, Chilli & Golden Potatoes. If you put halved baby potatoes on to steam before you get started on the lamb chops, you can fairly effortlessly rely on a proper meat-and-potato supper in around 20 minutes (plus a little marinating time). Steaming the potatoes is, for me, an important stipulation: a steamed spud is a sweet spud; more than that, cooked this way, rather by boiling, the potatoes are dry when done, which makes them easy to fry to crisp bronzedness, without spitting, later. It's important, though, that you don't fill your pot with too much water first. If new potatoes aren’t around, then use a couple of baking potatoes, cut into 1cm / ½-inch dice.

Italian Roast Chicken With Peppers and Olives. Duck Breasts With Pomegranate and Mint. Rack-Roasted Chicken with Gravy Potatoes. Speedy Seafood Supper. Chicken, Mushroom and Bacon Pie. Saffron Scented Chicken Pilaf. Asparagus, Radish and New Potato Salad. Chicken In A Pot with Lemon and Orzo. This is a dish, a family favourite, that I cooked moreorless straight after I’d got off the plane after two months on the road, to signal and celebrate that I was truly home. 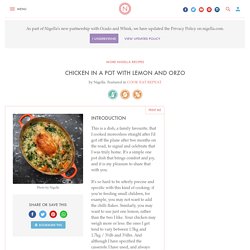 It’s a simple one pot dish that brings comfort and joy, and it is my pleasure to share that with you. It’s so hard to be utterly precise and specific with this kind of cooking: if you’re feeding small children, for example, you may not want to add the chilli flakes. Similarly, you may want to use just one lemon, rather than the two I like. Your chicken may weigh more or less: the ones I get tend to vary between 1.5kg and 1.7kg / 3½lb and 3¾lbs. Fig and Olive Chutney. Mauritian Prawn Curry. Spaghetti With Marmite. I came across this recipe in Anna Del Conte's memoirs, Risotto with Nettles. Now, there are so many recipes I could borrow from her, and many I have, but this is the one I have to show you here.

She introduces it as hardly a recipe, but I wanted to include it because I haven't as yet found a child who doesn't like it. I know the combination of pasta and Marmite sounds odd to the point of unfeasibility, but wait a moment, there is a traditional day-after-the-roast pasta dish, in which spaghetti is tossed in stock, and I have eaten shortcut versions of this in Italy (recreated guiltlessly in my own kitchen) which use a crumbled stock cube, along with some butter, olive oil, chopped rosemary and a little of the pasta cooking water to make a flavoursome sauce for spaghetti. If you think about it, Marmite offers saltiness and savouriness the way a stock cube might. Vodka Marinated Steak. Egyptian Tomato Salad. Linguine With Chilli, Crab and Watercress. Salmon, Avocado, Watercress and Pumpkin Seed Salad. Cauliflower, Garlic and Turmeric Soup. Mustard Pork Chops. Korean Calamari.

Tortellini At Midnight by Emiko Davies. Hot and Sour Beef Salad. Chowder With Asian Flavours. This is the perfect supper on those days when a knife and fork seem like just too much work. It's instantly comforting but spirited enough to make one feel invigorated rather than stultified by eating it. Sweet Potato Macaroni Cheese. Slow Roast Pork Belly. There are a few meals I can say I'm making that will make my children excited (or pretend to be), and this is one of them. Alongside there must be Pie Insides (which is what my daughter has always called leeks in white sauce) and for ultimate gratification, roast potatoes although I usually use goose fat for roast potatoes, I feel the pork belly allows, indeed encourages, the substitution of lard. I'm not convinced that with all that fabulous crackling you do need roasties as well, but I like to provide what makes people happy. I have advised an overnight marinade, but if I'm making this (as I tend to) for Sunday supper, I often prepare it in the morning and leave it in the fridge loosely covered with baking parchment, or midday-ish and leave it uncovered in a cold place (but not the fridge) for a few hours.

Read more As featured in. Rice and Vegetable Aash with Puy Lentils. Pasta Salad Primavera. Chicken and veg tray bake. Rapid Ragu. Roast Rib of Beef With Port and Stilton Gravy. Chorizo and Chickpea Stew. Maple Chicken 'N' Ribs. The Taste of Home. Tomato, Date and Chickpea Tagine. Chickpeas With Rocket and Sherry. Steak and Kidney Pudding. Naan Pizza. Scallops and Chorizo. Pappardelle With Butternut and Blue Cheese. Beer-Braised Pork Knuckles With Caraway, Garlic, Apples and Potatoes. Thai Yellow Pumpkin and Seafood Curry. It's a good idea to have something up your sleeve that you can cook quickly, and simply, when you've got friends coming over to supper midweek after work. This is that something. Don't let the length of the list of ingredients put you off. You really could go to the supermarket at lunchtime and buy everything you need. What's more, most of it keeps: salmon, raw prawns, lime leaves and lemongrass in the deep-freeze (and all but the salmon can be used from frozen); curry paste in the fridge; the coconut milk, fish sauce, fish-stock concentrate and turmeric in the cupboard.

One Pan Sage and Onion Chicken and Sausage. Moroccan Vegetable Pot and Couscous with Pine Nuts and Dill. Salmon Fishcakes. Lamb Cutlets With Mint, Chilli & Golden Potatoes. Hearty Wholewheat Pasta With Brussels Sprouts, Cheese and Potato. It is not quite normal to feel as joyous as I do when saying the words “Brussels sprouts”, but this recipe does not merely use said much-denigrated ingredient, it also celebrates it. Sprouts are nutty, fresh, gorgeous, and I regard this recipe as their seasonal showcase.

Not Italian, you might say. Well, my inspiration for it is the one authentically defining dish of Valtellina, in Lombardy, up towards the Swiss border. Beef and Beans With Pasta. Breakfast Bruschetta. Spanish Chicken With Chorizo and Potatoes. Lamb With Rosemary and Port. Meatzza. Lentils with Tamarind and Dates. Warming sweet potato and ginger soup. Bulgar Wheat Salad With Pink-Seared Lamb. This bulgar wheat salad is loosely based on tabbouleh, only using coriander in place of the parsley, lime in place of the lemon and omitting the tomatoes and adding the chilli and some raw, diced courgettes. 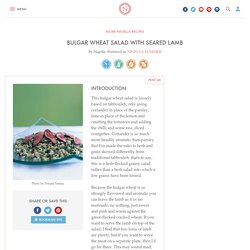 Coriander is so much more headily aromatic than parsley that I've made the ratio to herb and grain skewed differently from traditional tabbouleh: that's to say, this is a herb-flecked grainy salad, rather than a herb salad into which a few grains have been tossed. Because the bulgar wheat is so strongly flavoured and aromatic you can leave the lamb as it is: no marinade, no nothing, just sweet and pink and warm against the green-flecked cracked wheat. If you want to serve the lamb on top of the salad, I find that two loins of lamb are plenty, but if you want to serve the meat on a separate plate, then I'd go for three. This may sound mad, but really it does seem to make a different to how people eat. Speedy Seafood Supper. My Mother's Praised Chicken. Linguine With Lemon, Garlic and Thyme Mushrooms. Potato, Parsnip and Porcini Gratin. Mushroom "Steak" Sandwich. Crepes Suzette. Tarragon Salmon. Beef and Beans With Pasta. Pumpkin and Goat's Cheese Lasagne.

Roast Rib of Beef With Port and Stilton Gravy. Sweet Potato Macaroni Cheese. Coq Au Riesling. Linguine With Mussels. Tagliatelle With Chicken From the Venetian Ghetto. Spaghetti With Marmite. Scallops on the Shell. Linguine With Clams. Kale With Chorizo and Poached Egg. There is something so of-the-moment about this recipe, which is odd since it comes from a book published 20 years ago.

I seem to remember also that I did a lot of wistful complaining in How To Eat about how unfashionable kale had become. I had virtually been brought up on it. I certainly never would have foretold its hipster blossoming. I don’t use fresh chorizo sausages here, but generally I buy the dry-cured ones (not salami) that come in a ring or hoop, weighing around 200g / 8 ounces, and cut them in half.

As for the egg-poaching, I’m going to give you my method here, and you can use or ignore it as you wish: crack a large cold egg into a cup, add a teaspoon of lemon juice (or ½ teaspoon of cider vinegar or white wine vinegar) over the white; bring water to a delicate bubble (not boiling or anywhere near) and then slip in the egg, leaving behind the watery white that has collected in the bottom of the cup.

For US cup measures, use the toggle at the top of the ingredients list. Sesame Peanut Noodles. Lamb Ribs With Nigella and Cumin Seeds. Beef cheek ragù recipe. We and our partners use technologies such as a cookies on our site to enhance your user experience, personalise content and ads, provide social media features, and analyse our traffic. 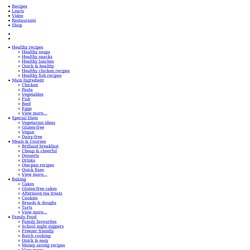 Click below to consent to the use of this technology on our site. For further details or to change your consent choices at any time - see our Cookie Policy. This will automatically switch all toggles below to "ON". Essential Essential cookies enable core functionality such as page navigation and access to secure areas. Gemelli with Anchovies, Tomatoes and Mascarpone. Chicken Schnitzel With Bacon and White Wine. Warm Spiced Cauliflower and Chickpea Salad With Pomegranate Seeds. Italian Roast Chicken With Peppers and Olives. Slow-Cooker Lamb and Pasta.