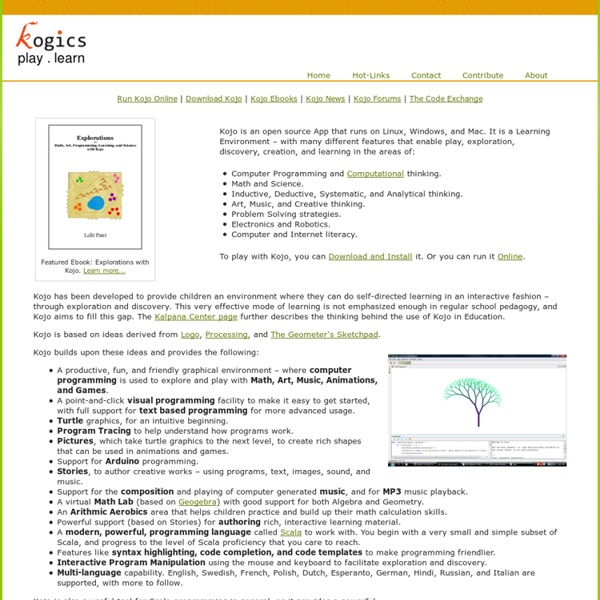 Kojo is an open source App that runs on Linux, Windows, and Mac. It is a Learning Environment – with many different features that enable play, exploration, discovery, creation, and learning in the areas of: Computer Programming and Computational thinking. Math and Science. Inductive, Deductive, Systematic, and Analytical thinking. To play with Kojo, you can Download and Install it. Kojo has been developed to provide children an environment where they can do self-directed learning in an interactive fashion – through exploration and discovery. Kojo is based on ideas derived from Logo, Processing, and The Geometer's Sketchpad. Kojo builds upon these ideas and provides the following: A productive, fun, and friendly graphical environment – where computer programming is used to explore and play with Math, Art, Music, Animations, and Games. Kojo is also a useful tool for Scala programming in general, as it provides a powerful REPL for Scala – with the following features:

DataTree selection rules Dear Users, I've been working on data tree selection rules this weekend and when 0.9.0063 is released (hopefully tomorrow, 4th November) the [Path Compare], [Tree Split] and [Replace Path] components will work slightly different from before. Sorry about breaking this, but it proved impossible to improve the selection logic with the fairly ambiguous notation that was implemented already. Not every change is breaking though and I hope that most simple matching rules will work as before. Imagine we have the following data tree, containing a bunch of textual characters: {0;0} = [a,e,i,o,u,y] {0;1} = [ä,ë,ê,ï,î,ö,ô,õ,ü,û,ÿ,ý] {1;0} = [b,c,d,f,g,h,j,k,l,m,n,p,q,r,s,t,v,w,x,z] {1;1} = [ç,ĉ,č,ĝ,ř,š,ş,ž] There are a total of four branches {0;0}, {0;1}, {1;0} and {1;1}. So what if we want to select from this tree only the standard vowels? This selection rule hard-codes the number zero in both tree path locations. {0;?} {? {0;?} {A;B;C;... The following rule notations are allowed: David Rutten Seattle, WA

Processing Arthur C. Clarke’s documentary on Fractals: A basic set with fractal behaviour is the set of Complex numbers (C): No matter how much one zooms in or out, the set is self-similar with infinite detail. The typical fractal sets (Mandelbrot, Julia, Fatou) follow a pattern of 3 infinities: an infinite number of points is run an infinite number of times through a recursive polynomial and it will/will not reach infinity: To make the step to 3d, the major issue is that the 2d rules cannot be generalized because there is no corresponding set of numbers for 3d space. 1d space has Real numbers, 2d space has Complex numbers, but there is no 3d equivalent. Either way, results are similar: Dealing with infinite numbers, infinite iterations and infinite sets of points, computation times become an issue. The image above is magnified ~3.10e13 times. Building 3d models in computer space is slightly trickier because of the huge number of points involved to define even a limited section of a fractal.

WeWantToLearn.net | Diploma Studio 10 at Westminster University School of Architecture and the Built Environment