Spanish Chicken With Chorizo and Potatoes. CHOWDER WITH ASIAN FLAVOURS. CHICKEN WITH SPRING ONIONS, CHILLI AND GREEK YOGURT. CROQUE MONSIEUR BAKE. LINGUINE WITH LEMON, GARLIC AND THYME MUSHROOMS. SCALLOPS ON THE SHELL. CRUNCHY SALAD WITH HOT AND SOUR DRESSING. Pasta with Courgettes. This is one of my favourite pastas, but I must start with a warning: it isn’t as easy on the eye as on the palate; this is a dish made for pleasure not a photo-op. 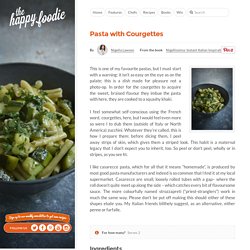 In order for the courgettes to acquire the sweet, braised flavour they imbue the pasta with here, they are cooked to a squashy khaki. MONKFISH WRAPPED IN ROSEMARY, LEMON & PARMA HAM. SALADE NICOISE. RAW BEETROOT, DILL AND MUSTARD SEED SALAD. ANGLO-ASIAN LAMB SALAD. SICILIAN PASTA WITH TOMATOES, GARLIC & ALMONDS. Nigella Lawson. CRISPY LAMB CHOPS. SALT AND PEPPER SQUID. This is unexpectedly easy to shop for as well as easy to cook. 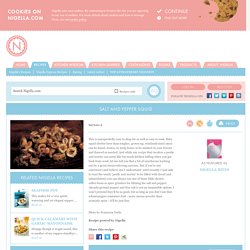 Baby squid (better here than tougher, grown-up, windsock-sized ones) can be found, frozen, in 500g boxes, to be stashed in your freezer and thawed as needed. And while any recipe that involves a pestle and mortar can seem like too much kitchen faffing when you get back from work, let me tell you that a bit of murderous bashing can be a great stress-relieving exercise. But if you're not convinced (and believe me I understand: until recently I had only to read the words 'pestle and mortar' to be filled with dread and intimidation) you can always use one of those little electric coffee-bean or spice grinders for blitzing the salt and pepper. Already-ground pepper and fine salt is not an impossible option; I won't pretend they'll be as good, but as long as you don't use that school-pepper-container dust - more sneeze-powder than aromatic spice - it'll be just fine.

Photo by Francesca Yorke. CHICKEN, MANGO AND CHILLI SALAD. SWEETCORN CHOWDER WITH TOASTED TORTILLAS. STEAK SLICE WITH LEMON AND THYME. PASTA ALLA GENOVESE. TUNA AND CRAB AND AVOCADO WRAPS. I have never really thought of myself as a person who could wrap, fold or fiddle about with food or felt that way inclined. 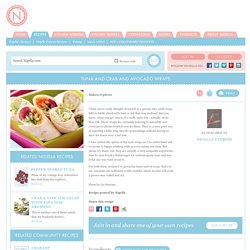 But you know, when you get into it, it's really quite OK - actually, more than OK. These wraps are curiously relaxing to assemble and everyone is always bowled over by them. They're a very good way of injecting a little zing into the proceedings without having to slave for hours over a hot hob. I have added the option of the crab wraps as I do understand not everyone is happy working with or even eating raw tuna. But please try those, too: they are actually a very unspooky experience.

For both these recipes I've given the basic unit of wrap; that's to say, amounts are sufficient to fill 1 tortilla, which in turn will yield 3 pieces once rolled and cut. Photo by Lis Parsons. SPAGHETTI WITH MARMITE. I came across this recipe in Anna Del Conte's memoirs, Risotto with Nettles. 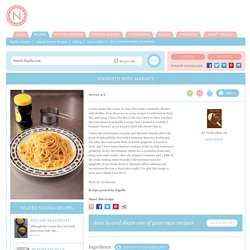 Now, there are so many recipes I could borrow from her, and many I have, but this is the one I have to show you here. LINGUINE WITH CHILLI, CRAB AND WATERCRESS. SAKE STEAK AND RICE. THE ULTIMATE GREEK SALAD. Greek salad is the sort of abominated fixture in the culinary canon which no appetite for retro-chic can make cool. 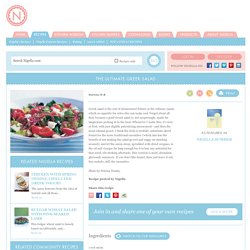 Forget about all that, because a good Greek salad is, not surprisingly, made for languorous picking at in the heat. Whenever I make this, it's met, at first, with just slightly patronising amusement - and then the most colossal greed. I think the trick is twofold: substitute sliced fennel for the more traditional cucumber (which also has the benefit of not making the salad go wet and soggy on standing around); and let the onion steep, sprinkled with dried oregano, in the oil and vinegar for long enough for it to lose any potential for that acrid, rib-sticking aftertaste. COURGETTE FRITTERS. TARRAGON SALMON. LEMON RISOTTO. GAMMON STEAKS WITH PARSLEY. OLD FASHIONED TOMATO SALAD. This tomato salad is all you need for a summer starter. 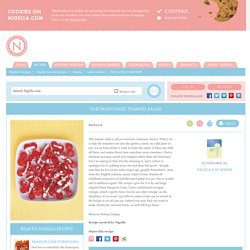 What I do is take the tomatoes out into the garden, uncut, on a flat plate or two, for an hour before I want to make the salad: it takes any chill off them and makes them taste somehow more tomatoey. Cherry tomatoes perhaps sound new-fangled rather than old-fashioned, but I'm coming to that. For the dressing is, and I refuse to apologise for it, nothing more nor less than that great - though, now that we live in the extra-virgin age, greatly discredited - item from the English culinary canon, Salad Cream. Banish all childhood memories of sick-flavoured gloop in a jar: this is worlds and E-additives apart. SPRING CHICKEN. PASTA SALAD PRIMAVERA. MOZZARELLA IN CARROZZA. JUICY BEEF SKEWERS WITH HORSERADISH DIP. KEDGEREE RISOTTO. PEPPERS WITH FETA AND ALMONDS. BUTTERFLIED LEG OF LAMB WITH BAY LEAVES AND BALSAMIC VINEGAR. 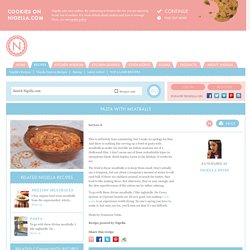 And there is nothing like serving up a bowl of pasta with meatballs to make you feel like an Italian mamma out of a Hollywood film. I don’t mean one of those redoubtable types in amorphous black: think Sophia Loren in the kitchen. It works for me. The trick to these meatballs is to keep them small. Don’t actually use a teaspoon, but use about a teaspoon’s amount of mince to roll each ball. CHEESE FONDUE. HUMMUS WITH SEARED LAMB AND TOASTED PINENUTS. RITZY CHICKEN NUGGETS. RAW BEETROOT, DILL AND MUSTARD SEED SALAD. SICILIAN PASTA WITH TOMATOES, GARLIC & ALMONDS. NURSERY FISH PIE. SALMON WITH GREENS AND SHITAKE MUSHROOMS. AROMATIC CHILLI BEEF NOODLE SOUP. CROQUE MONSIEUR BAKE. CRAB & AVOCADO SALAD WITH JAPANESE DRESSING. MEXICAN CHICKEN OR TURKEY SALAD WITH TOMATO AND BLACK BEAN SALSA. WHITE BEAN MASH. SCALLOPS AND CHORIZO. STEAK AND KIDNEY PUDDING. LINGUINE WITH CHILLI, CRAB AND WATERCRESS.

SMOKED COD AND CANNELLINI BEANS. BEEF STEW WITH ANCHOVIES AND THYME. PARMESAN SHORTBREADS. This is an Italian-inspired recipe that comes to me from Australia via Brazil. 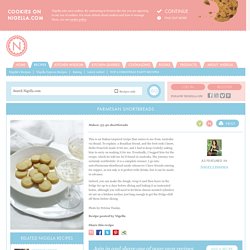 To explain: a Brazilian friend, and the best cook I know, Helio Fenerich made it for me, and I had to keep (rudely) asking him to carry on making it for me. Eventually, I begged him for the recipe, which he told me he’d found in Australia. The journey was certainly worthwhile: it is a complete winner; I go into auto-Parmesan-shortbread mode whenever I have friends coming for supper, as not only is it perfect with drinks, but it can be made in advance. Indeed, you can make the dough, wrap it and then leave in the fridge for up to 3 days before slicing and baking it as instructed below, although you will need to let these cheese-scented cylinders sit out on a kitchen surface just long enough to get the fridge-chill off them before slicing. Photo by Petrina Tinslay. BUTTERNUT SQUASH WITH PECANS AND BLUE CHEESE. BROCCOLI AND STILTON SOUP. Ed's Victorious Turkey Hash - The Happy Foodie. This turkey hash recipe, given to me by my friend and agent, Ed Victor, and in charmingly bossy letter form, has been a recurring feature in my books. 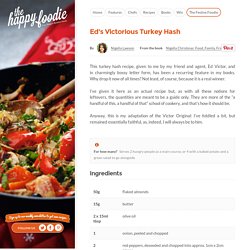 Why drop it now of all times? Not least, of course, because it is a real winner. I’ve given it here as an actual recipe but, as with all these notions for leftovers, the quantities are meant to be a guide only. They are more of the “a handful of this, a handful of that” school of cookery, and that’s how it should be. Anyway, this is my adaptation of the Victor Original: I’ve fiddled a bit, but remained essentially faithful, as, indeed, I will always be to him. For how many? Toss the flaked almonds in a hot, dry pan over a medium to high heat until toasted. Add the butter and oil to the pan, then throw in the chopped onions and peppers and cook, stirring, over a medium to low heat for about 10 minutes. Stir in the garlic, then add the shredded turkey and cook until piping hot. SPAGHETTI WITH MARMITE. POTATO, PARSNIP AND PORCINI GRATIN. Nigella Lawson. LINGUINE WITH LEMON, GARLIC AND THYME MUSHROOMS. SCALLOPS WITH THAI SCENTED PEA PUREE. PASTA ALLA GENOVESE. CHESTNUT AND PANCETTA SALAD.