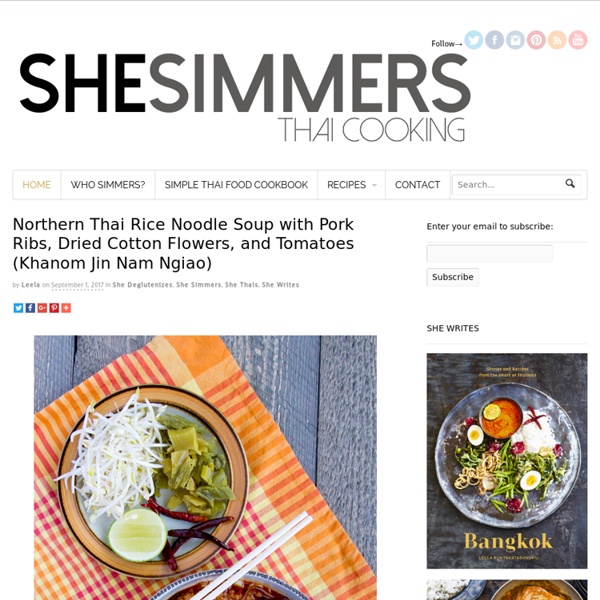 Several days ago, I announced that my book, Simple Thai Food: Classic Recipes from the Thai Home Kitchen, had become available for preorder. To celebrate the launch of the book, I also teamed up with 5 companies who have generously given away their products to 7 different readers of SheSimmers. The responses were overwhelming, and I am sitting here all bubbling with joy and gratitude. If I had known how much happiness it would bring me to be able to offer freebies to my faithful readers, I would have done it more often in the past 5 years. Seriously. This means that if you didn’t win anything in this round of giveaways, please don’t be discouraged.

Apple Sauce Mac & Cheese with Apple Sausage The weather here has been very back and forth lately. It was in the 80's this past weekend, with hail a few days before that, and today it's in the 50's and raining again. But I don't mind the weird weather so much because the brief high temperature managed to convince the tree in my backyard that it's spring, so it has now exploded with blossoms. The only unfortunate part is that the flowers don't smell very good, and by that I mean they smell like breaded fish.

My Chez Panisse Experience : Cafe Fernando – Food Blog - berkeley - chez panisse - san francisco - Restaurants June 23rd, 2011 | Category: Restaurants, Travel Two years before opening Chez Panisse, Alice Waters, together with her friend from the Montessori Centre, started a journey from London and ended up in a remote village in Turkey. In the middle of nowhere, they ran out of gas and asked for help from a big-eyed boy. The boy mimed there wasn’t any gas left to pump and when they asked for food, this time he led them to his house. He built a fire out of pine cones, put on a teapot and came back with a tiny piece of cheese, which he then cut into microscopic portions before serving them. Sesame Chicken Sesame Chicken I have whined and complained before about my plight of living without Chinese takeout. Well this is how I cope. Sesame Chicken is my favorite on the all you can eat buffet, well along with the Crab Rangoon. This is a recipe that I adapted from one my sister-in-law gave me.

Palak Paneer (Spinach and Cheese) High in iron and protein, this is a great dish for those that don’t eat a lot of meat, but still packs a fair bit of flavour. You’ll see there aren’t too many spices in my recipe – I like to let the spinach and paneer flavours come through. I blend my spinach to give a smoother texture, but you can equally leave it without blending for a more rustic texture. Fun fact, if you see ‘Palak’ on a menu, it’ll be pure spinach – if you see ‘Saag’ then it’ll be mainly spinach, but also some other leafy greens, like watercress.

Industrie Bar - Sydney - Bars & Pubs Doctors and nutritionists say you should always give yourself a few booze-free days in your week in order to let your liver recover from the weekend's pounding. Mondays are a great day to start such a regimen. Drinking on Monday nights is like eating soup with your hands - no one ever said ‘don't do it' and yet it's taken as a given that it's a bad idea. 2011 » Pete Drinks One of my big beer obsessions is exploring the ever growing London brewing scene; the London Brewers page I maintain here isn’t so much a public service as a ‘to drink’ list. Here, we pay our first visit to a brewpub – specifically, the Bull in Highgate which has the added benefit of being the brewery geographically closest to my house! The Bull has been there for a very long time, but it’s only a matter of months since Dan Fox took the place over, refurbished it into a stylish space and somehow managed to cram a small, 2.5 barrel brewery – the London Brewing Company – into the corner of the kitchen. Ok, so it’s not going to put Fullers out of business any time soon but despite the size they aim to keep four of their own brews on tap at any one time.

Thai Peanut Salsa Sauce Salsa...in a Thai dish...whaaaaaa? I've seen recipes for Pad Thai with ketchup in it, but this one really threw me. But my curiosity started to take hold...and I had an almost excessive amount of salsa in my pantry, so I was intrigued but still skeptical. Pupusas: A Delicious How-To pupusas. if i could sum them up in three words, they would be crispy, chewy, and stuffed. how does that not sound good!? i found out about pupusas (a salvadorian delight) from my new favorite cookbook, Viva Vegan, and this was my second round making them. i tweaked the dough, and made my own filling: zucchini, corn, and pinto! i also simplified the cooking of them for either feeding a large crowd, or making extras to freeze. i also will post pics of making the pupusas, since thats the real tricky part. eat these bad boys with something green, and a spicy chile for dipping. pupusas with broccoli, rice, and fried plantains Pupusas, adapted from Viva Vegan makes 8, serves 4

Homemade Pork Buns! & I made that! Dear Pork, We meet again. This time things got intense. As per usual I was dabbling in vegetarianism, reading books like “Animal Factory” and “Eating Animals” and having thoughts like “I just can’t keep eating meat”. Then I bought a groupon for Barnes and Noble. Dammit, I blame it on them. Asian Baked Tofu Recipe Whether you are vegan or not, everyone can enjoy this Asian Baked Tofu recipe because it contains sweet and salty flavors that enhance the tofu while baking in the oven. Jenna Weber shares why she loves Asian Baked Tofu in a full post on the Fresh Tastes blog. Ingredients Australia - eatshowandtell As most of our loyal readers would know, Howard and I recently did a little thing called… getting married. It’s over a month since the wedding day and despite it not being so long ago, I still find it difficult to recall certain aspects of the wedding. So many things were happening in the one day that some parts of the day is a blur. The last couple of weeks has been one of the most amazingly intense experiences that I have ever experienced. Thanks to Fouad, I was fortunate enough to be involved in a couple of Secret Dinners for the Crave International Food Festival. This will be a… Read more