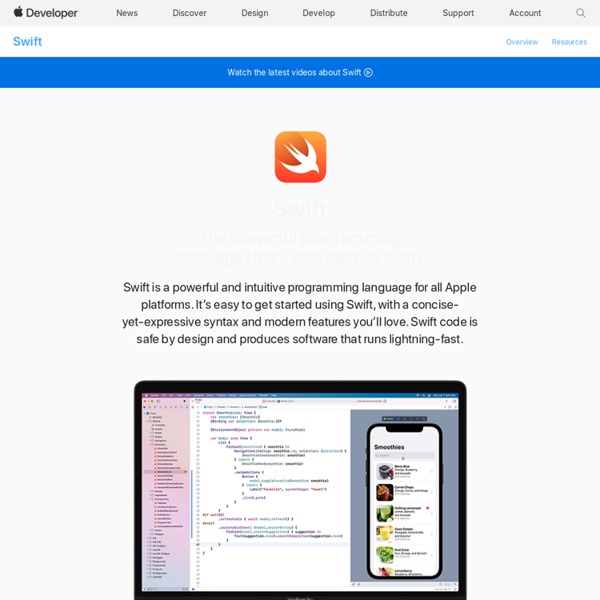 Playgrounds and REPL in Xcode Much like Swift Playgrounds for iPad, playgrounds in Xcode make writing Swift code incredibly simple and fun. Type a line of code and the result appears immediately. You can then Quick Look the result from the side of your code, or pin that result directly below. The result view can display graphics, lists of results, or graphs of a value over time. You can open the Timeline Assistant to watch a complex view evolve and animate, great for experimenting with new UI code, or to play an animated SpriteKit scene as you code it. Read-Eval-Print-Loop (REPL). Fast and Powerful From its earliest conception, Swift was built to be fast. Swift is a successor to both the C and Objective-C languages. Designed for Safety Swift eliminates entire classes of unsafe code. Another safety feature is that by default Swift objects can never be nil. Objective-C Interoperability To get started with Swift, download Xcode and follow the tutorials available on the Resources tab.

Stop Motion Movie Creation in Early Childhood Education I frequently work with educators and students in early childhood education classrooms to identify meaningful ways to integrate technology into instruction. In this work I meet with the classroom teacher to better understand the content and objectives for the upcoming weeks. We think about the content first, and identify easy ways to embed technology use into instruction. In the past, I’ve written about times that I’ve used LEDs with pre-school makers, and previous stop motion movies I created with my son (Jax) while he was in pre-school.

The Swift Programming Language: About Swift Swift is a new programming language for iOS and OS X apps that builds on the best of C and Objective-C, without the constraints of C compatibility. Swift adopts safe programming patterns and adds modern features to make programming easier, more flexible, and more fun. Swift’s clean slate, backed by the mature and much-loved Cocoa and Cocoa Touch frameworks, is an opportunity to reimagine how software development works. Swift has been years in the making. Apple laid the foundation for Swift by advancing our existing compiler, debugger, and framework infrastructure. We simplified memory management with Automatic Reference Counting (ARC).

App Inventor Get Started Follow these simple steps to build your first app. Tutorials Step-by-step guides show you how to build all kinds of apps. Teach Teachers, find out about curriculum and teaching resources. Xcode - What's New Playgrounds Playgrounds have been thoroughly updated so you can author gorgeous documentation, easy to follow experiments, and interactive educational content. You can add playgrounds to your project that show how to use your own APIs, demonstrate how you solved a problem, or even demo your code’s features. Code comments are static in comparison. Collaborative lesson development with GitHub If you're doing any kind of scientific computing and not using version control, you're doing it wrong. The git version control system and GitHub, a web-based service for hosting and collaborating on git-controlled projects, have both become wildly popular over the last few years. Late last year GitHub announced that the 10-millionth repository had been created, and Wired recently ran an article reporting on how git and GitHub were being used to version control everything from wedding invitations to Gregorian chants to legal documents. Version control and GitHub-enabled collaboration isn't just for software development anymore. We recently held our second Software Carpentry bootcamp at UVA where I taught the UNIX shell and version control with git.

Flint’s perfect strategy on how to teach programming Alfred Thompson had this link to a set of nice simple Python projects. The projects are great ideas. It is the implementation that I think is extremely poor. “Instruct the students to input the following code:”. Is there a worse line to use when teaching anything? This is the universal approach to programming tutorials.

20 Free Ebooks For Software Developers [Beginners] Developing and programming software and applications is never an easy task, and sometimes you need a bit of help, whether it’s for managing your workflow, refreshing your knowledge or learning a new programming language. Thankfully, there are a lot of resources on the Internet that can help, including free ebooks. Here, we’ve compiled a list of 20 free ebooks that should definitely be of use to beginner software developers and programmers. They cover a decent range of topics, from more general workflow advice to nitty-gritty code and quite a few things in between. Without further ado, here’s the list. Recommended Reading: Top 10 Websites To Learn Coding (Interactively) Online

Will.i.am Wants Mandatory Computer Science Classes in Schools To music artist Will.i.am, technology can change the world. On Tuesday, Will.i.am, the former Black Eyed Peas singer whose legal name is William Adams, dropped by the Apple Store in San Francisco’s Union Square for a screening of the music video for a new version of the group’s 2003 hit Where Is the Love? He was joined by Apple retail chief Angela Ahrendts, and discussed why the proceeds from the song would go toward education programs and initiatives through Adams’ i.am.angel foundation. Specifically, Adams highlighted the importance of making computer science classes available more broadly in schools, especially in disadvantaged neighborhoods. “What success would look like… In every inner city, third period—’where are you going?,’ I’m going to iOS class,” he told Ahrendts when asked about the ideal outcome of his efforts to improve education.