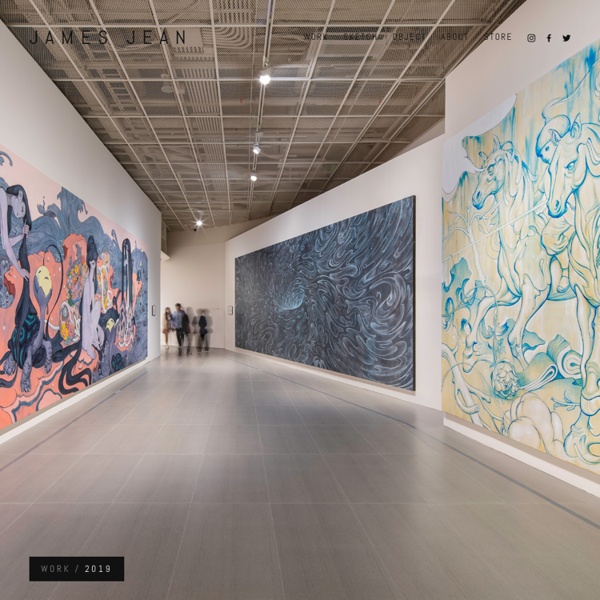 Strange Gods It’s been quiet around here this week, but here’s a shot of what I’ve been up to. Hopefully this giant monstrosity will be finished within the next few days, and I can set myself upon the next. Anonymous said: WHAT IS YOUR OPINION ON THE SKELETON WAR CG___MaxenceBurgel Florian de Gesincourt, Art Director at Zootfly : "Maxence is a really a talented artist, very professional and creative. I worked with him several times to provide concept art for our games, the result was better than expected. He understood very well the needs of our studio, respect deadline, to deliver great concepts. Just check his portfolio!" Yann Tambellini, Creative Director at Kylotonn :

Jenny Saville JENNY SAVILLE The Mothers, 2011 Oil on canvas 106 5/16 x 86 5/8 inches (270 x 220 cm) Jenny Saville was born in Cambridge, England in 1970. In 1990, midway through her BA course at the Glasgow School of Art, Jenny Saville exhibited in Contemporary '90 at the Royal College of Art. In 1992 she completed her degree as well as showing in Edinburgh and in Critics Choice at the Cooling Gallery, London. Following the success of her show at the Saatchi Gallery in 1994, which generated a great deal of publicity for her work (the images were ubiquitous that year), Saville went on to take part in the exhibition American Passion, which toured from the McLellan Gallery, Glasgow, to the Royal College of Art and the Yale Center for British Art in New Haven, Connecticut. By 1994 many people were familiar with Saville's massive paintings, such as Plan, in which a naked woman is seen from below, her body filling the canvas through a combination of physical bulk and extreme foreshortening.

Latest Torridon & Shieldaig photos Photos from Torridon, Shieldaig and surrounding areas ~ Photos from 2008 ~1 Shieldaig Island in June Rhododendrons at Balgy - June 2009 Shieldaig - 6.30 a.m. Sunday May 31st 2009 Michał Dziekan Illustrator and character designer Michal Dziekan was born and raised in small town in south-western Poland. He moved to city Wroclaw where he attended Architecture on University of Technology. After three years he left school and moved to Warsaw to work in post production studio Platige Image as a concept artist and matte painter. He stayed in Platige Image from 2007 to 2011, where working on animated commercials and films he got opportunity to gain experience in such fields as vfx compositing, motion graphics animation, animation direction and directing. During that time he was developing as an illustrator and character designer.

Gobz___Ailis I went in Hokkaido in Japan three weeks ago, I loooooooooooved it, it such a wonderful place! It’s wilder than in tokyo, and people are generally more open . Food is amazing , especially seafood (they eat everything, from seaweed to urchins, sea-spiders, crabs, jellyfishes, scallops, shrimps…it is quite strange , because we are not used to eat something that fresh ). There is a lot of natural Onsens (hot water coming directly from the ground) were you can rest after snowshoeing all the day (It’s so cold there that we had snow in april!) I didn’t had the time to go on the natural parks of the eastern hokkaido like the Akan National Park, but next time for sure!