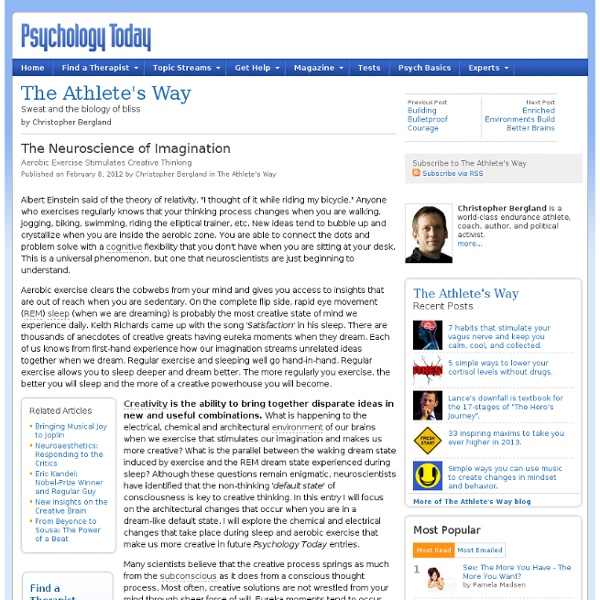 Albert Einstein said of the theory of relativity, "I thought of it while riding my bicycle." Anyone who exercises regularly knows that your thinking process changes when you are walking, jogging, biking, swimming, riding the elliptical trainer, etc. New ideas tend to bubble up and crystallize when you are inside the aerobic zone. You are able to connect the dots and problem solve with a cognitive flexibility that you don't have when you are sitting at your desk. This is a universal phenomenon, but one that neuroscientists are just beginning to understand. Aerobic exercise clears the cobwebs from your mind and gives you access to insights that are out of reach when you are sedentary. What is happening to the electrical, chemical and architectural environment of our brains when we exercise that stimulates our imagination and makes us more creative? Many scientists believe that the creative process springs as much from the subconscious as it does from a conscious thought process.

approche hoministe (US_ Avon) At Avon Old Farms, our goal is to be the best school for boys. Every aspect of our school program is engineered to enable boys to be successful, and since 1927, we have been providing young men with the tools necessary to achieve in their scholastic, athletic, and artistic endeavors. Everything that takes place on campus – in the classroom, in the dormitories, on the athletic fields – is specifically designed with the educational and developmental needs of boys in mind. We prepare our boys to be valued citizens who know how to set and attain high personal and professional goals. Downloads Gapminder Slides Download Gapminder’s slides, free to modify and use in any way you like! Here are the slides used in our public presentations and TED talks. Gapminder Tools Offline Handouts & Lesson plans (PDF) Interactive presentations (Flash, PowerPoint etc.)

The 'thinking cap' that could unlock your inner genius and boost creativity By Fiona Macrae Updated: 07:39 GMT, 30 September 2008 There is a theory that the spark of genius lurks hidden within all of us. Now scientists are developing a 'thinking cap' that could turn that theory into practice and unlock the amazing potential of the human brain. The device uses tiny magnetic pulses to change the way the brain works and has produced remarkable results in tests. Wearing the hairnet-like cap for a few minutes improved artistic ability and proof-reading skills.

invisibility cloak now a reality Nov. 12, 2012: A member of the lab at Duke University's Pratt School of Engineering has made a giant leap toward creating an invisibility cloak.Duke University Let's hope Star Fleet perfects the technology before the Romulans get their hands on it. Scientists have made the impossible possible, disappearing a cylinder by guiding light around it before putting those photons back on their original path -- essentially bending light around the object. making universes machine Next month, one of the world's fastest supercomputers will run the largest, most complex universe simulation ever attempted. Argonne National Laboratory Cosmology is the most ambitious of sciences. Its goal, plainly stated, is to describe the origin, evolution, and structure of the entire universe, a universe that is as enormous as it is ancient.

Meditation Health Benefits: What The Practice Does To Your Body We hear it all the time: Meditation can improve our creative thinking, our energy, stress levels and even our success. Prominent artists, businessmen and politicians cop to the practice. Would it work for you? "It did to my mind what going to the gym did to my body -- it made it both stronger and more flexible," said Dr. Hedy Kober, a neuroscientist who who studies the effects of mindfulness meditation, which she has practiced for 10 years, at her lab at Yale University. enchanted objects Enchanted Objects Arthurian Legend The following magical objects found in the Arthurian legend are actually too enormous to list here. Since Arthur and some of his companions are found in Welsh (Celtic) literature, it is only right to list their possessions here. Back to the Appendix French Legend

Contemplative Science and Practice: "How to Do Research You Love" Padam-lama Vajrasattva Heruka, Dorje Sempa with Vajragarvi In early January I presented a lecture on "Contemplative Science and Practice: How to Do Research You Love" to the Faculty Forum at the Wright Institute. I told my personal story (how a meeting with Paul Ekman, the world-famous emotion researcher upon whom the TV series "Lie to me" was based, directed me to Tibetan Buddhism and a Tibetan Buddhist practice). I told a research story, and provided an overview of current findings in contemplative science, including the findings from our own lab at the Wright Institute, the Emotion, Personality and Altruism Research Group (EPARG) ( A few days later, an opinion piece appeared in the Chronicle of Higher Education by Owen Flanagan, essentially trashing what he called "Hocus-Pocus Buddhism."

How I Use Mindmapping to Write I use lots of tools for writing. The other day, I talked about the importance of writing practice. Today, as I’m working on a new speech, I wanted to share another tool I use: mind mapping. Before you ask, because the technology minded of you often do, this particular mindmapping software is called Mind Node and it’s for Mac. There are plenty of tools for Windows and some that operate online. I think Steve Rubel covered some a while back, but I’m too lazy to Bing the exact title. 10 More Common Faults in Human Thought Humans This list is a follow up to Top 10 Common Faults in Human Thought. Thanks for everyone’s comments and feedback; you have inspired this second list! It is amazing that with all these biases, people are able to actually have a rational thought every now and then.

from 3 to 4D observation A film for a wide audience! Nine chapters, two hours of maths, that take you gradually up to the fourth dimension. Mathematical vertigo guaranteed! Background information on every chapter: see "Details". Click on the image on the left to watch the trailer ! July/August 2011 > Features > Stanford Prison Experiment What happened in the basement of the psych building 40 years ago shocked the world. How do the guards, prisoners and researchers in the Stanford Prison Experiment feel about it now? It began with an ad in the classifieds. Male college students needed for psychological study of prison life. $15 per day for 1-2 weeks. More than 70 people volunteered to take part in the study, to be conducted in a fake prison housed inside Jordan Hall, on Stanford's Main Quad.