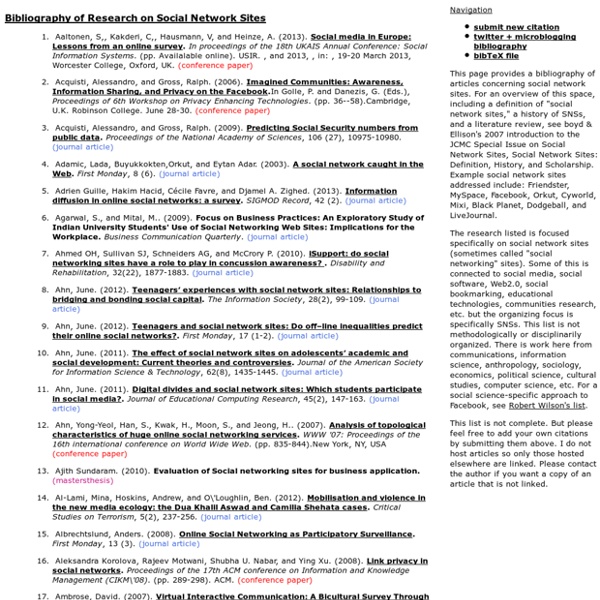 Data & Society — The Promises, Challenges, and Futures of Media Literacy Contemporary media literacy programs–commonly organized around the five main themes of youth participation, teacher training and curricular resources, parental support, policy initiatives, and evidence base construction–have demonstrated positive outcomes, particularly in the case of rapid responses to breaking news events, connecting critical thinking with behavior change, and evaluating partisan content. However, media literacy efforts continue to struggle with a lack of comprehensive evaluation data, with some research showing programs can have little-to-no impact for certain materials, or even lead to harmful overconfidence in assessing media content. Report authors Monica Bulger and Patrick Davison make five recommendations to guide the future of media literacy programming for educators, legislators, technologists, and philanthropists in the space.

The richer lives of social media users There’s a perception that people who spend a lot of time on social networks actually aren’t very social at all, that they’re caught up in a virtual world at the expense of relationships IRL (in real life). But it turns out that perception isn’t really true. Heavy social network users are not any more isolated than the average person, and they are just as interested in real-life things as their Facebook-eschewing counterparts. That’s according to a new study from the Pew Research Center’s Internet & American Life Project, which set out to discover whether technologies isolate people and truncate their relationships. The short answer was no. The study found that roughly 59 percent of internet users are also social network users, up from 34 percent three years ago, and the vast majority of those people are on Facebook. What did you find most interesting or most surprising about this study? Instead, we found that certain users have higher-than-expected levels of well-being.

The relationship between frequency of Facebook use, participation in Facebookactivities, and student engagement Neighbors Online How Americans learn about community issues Overview Americans use a range of approaches to keep informed about what is happening in their communities and online activities have been added to the mix. Face-to-face encounters and phone calls remain the most frequent methods of interaction with neighbors. In a poll conducted at the end of last year, we asked about online connections to communities and neighbors and found that in the twelve months preceding our survey: 22% of all adults (representing 28% of internet users) signed up to receive alerts about local issues (such as traffic, school events, weather warnings or crime alerts) via email or text messaging. 20% of all adults (27% of internet users) used digital tools to talk to their neighbors and keep informed about community issues. Overall, physical personal encounters remain the primary way people stay informed about community issues. Who knows who in neighborhoods and how neighbors interact Face-to-face Telephone Email Community blogs

Do Chinese Still Read Late at Night Nowadays? On the occasion of the World Book Day on April 23, China Press and Publication Institute announced the results of the Ninth National Reading Survey: nearly 60 percent of Chinese people said that they do not read too much. The popular advertising slogan that “book is not for reading but for collection" seems to have become a true portrayal of the reading nowadays. Although there are many reasons for the decreased ratio of the number of people to read, it is certainly not a good thing for a country that most people do not want to read because people should not give up their desire for the knowledge and civilization and lose the ability of learning and thinking at any time. First, people do not read. Second, there are no books worth reading. Third, people are too poor to read. To read or not to read is a personal choice, but it relates to the quality of the whole nation. Editor: Shi Liwei

Disclosure Statement The purpose of this Disclosure Statement is to position what you might find on my blog. This is heavily cribbed from David Weinberger who I adore and find to be a brilliant mentor. First things first, I am not speaking on behalf of my employer (Microsoft Research) and what I say on my blog may not reflect the beliefs or interests of my employer. This is a personal blog. I say what I want and no one pays me to write this blog or say particular things in it. I am not compensated for my blog – I do not run ads, no one pays me under the table, and I don’t sell Apophenia t-shirts or coffee mugs or chachkas of any kind. Attachments I am currently employed by Microsoft Research. I have advised or consulted for numerous companies over the years on short-term gigs, sometimes for pay and sometimes because they’re friends of mine. My research has been or is funded by many foundations, including the John D. and Catherine T. Objects of Study Universities Conferences Free stuff Links Friends and Followers

The New Dinosaur: Why I'm Not on Facebook, and Why You Shouldn't Be Either - Culture I gave up on Facebook the day it kicked me off for using a fake name. I can't remember now if it was 2006 or 2007, but I do remember a Facebook support staff member asking me via email to verify that I was actually named "Snuffles Caulfield." I couldn't, and after briefly considering some mock letterhead, I thought, Screw this stupid thing, and that was that. Five (or four) years later, I'm still saying, "Screw Facebook." The only difference is that I'm in the minority. Facebook is one of the most ingenious time-sucks known to man. And speaking of lame people, who in their right mind wants to open up their lives to everyone they meet or, worse yet, met decades ago? Of course all those complaints are peanuts when you begin to think about the real privacy concerns associated with Facebook. This policy stands in stark contrast to several of Facebook founder Mark Zuckerberg's more idealistic statements. That's Facebook in a nutshell.

Survey: half of Chinese only read 'a little' - China Watch - China Forum ... ontent_15117880.htm Only 1.2 percent of the Chinese people surveyed say they read a lot and 50.7 percent say they read a little according to the newly published National Reading Survey conducted in 2011. Among the respondents, 21.2 percent say they are satisfied with their reading volume, another 20.9 percent are not satisfied and the remaining 57.9 percent have moderate feelings towards their reading volume, according to the survey published by the Chinese Academy of Press and Publication on April 19. As to reading platforms, 38.6 percent read on digital instruments including computers, mobile phones, E-book appliances, and discs, which is a 17.7 percent increase compared to 2010. Among them, 41.8 percent accept paying for downloaded materials. Respondents approve of a digital book costing 3.5 yuan ($0.55) on average. 29.9 percent of Chinese read online and 27.6 percent read on mobile phones in 2011, both witnessing an increase compared to 2010.

Smart, dumb, candybar, flip, and brick: a visual history of mobile phones For most of their history, mobile phones have been shrinking. Small meant portable; it even, in the not too distant past, was a sort of status symbol. Remember Motorola’s runaway hit, the ultra-thin Razr? But something funny happened on the smartphone’s way to success. Years ago, your colleagues might have laughed at you if you couldn’t fit your phone in your pocket. If screen sizes continue to grow, you might want to invest in bigger pockets, a bulkier handbag, a man purse, or even a whole new way to carry your phone. Correction: An earlier version of this article stated that the Razr was Nokia’s runaway hit.

Report: Facebook has 750 million members | Digital Media Last summer, Facebook announced that it had achieved 500 million users and counting. Now that figure is completely outdated. Though Facebook hasn't released an official statement yet, TechCrunch is reporting that Facebook retains approximately 750 million regular users who log in to the social-networking site at least once per month. That number, which is larger than the population levels of at least a few countries on the planet, isn't all that surprising. The rate at which 250 million more people joined is the staggering aspect. Facebook launched in 2004, and it took until 2010 to reach 500 million members. TechCrunch speculates that Facebook might wait to deal out updated official numbers until it reaches 1 billion members, which would be a bit arrogant on Facebook's part--but that wouldn't be surprising either.