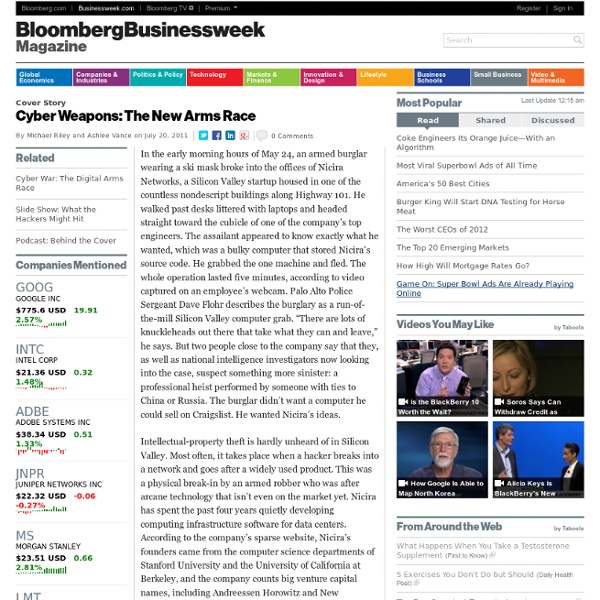 In the early morning hours of May 24, an armed burglar wearing a ski mask broke into the offices of Nicira Networks, a Silicon Valley startup housed in one of the countless nondescript buildings along Highway 101. He walked past desks littered with laptops and headed straight toward the cubicle of one of the company’s top engineers. The assailant appeared to know exactly what he wanted, which was a bulky computer that stored Nicira’s source code. He grabbed the one machine and fled. The whole operation lasted five minutes, according to video captured on an employee’s webcam. Palo Alto Police Sergeant Dave Flohr describes the burglary as a run-of-the-mill Silicon Valley computer grab. Intellectual-property theft is hardly unheard of in Silicon Valley. Those familiar with the burglary refuse to talk about it on the record, citing orders handed down by the federal investigators. Cyber attacks used to be kept quiet. Stuxnet set Iran’s nuclear program back months. Christopher J.

Police to begin iPhone iris scans amid privacy concerns Behind the CIA's Secret Somalia Operations | Countdown with Keith Olbermann To Our Faithful Current.com Users: Current's run has ended after eight exciting years on air and online. The Current TV staff has appreciated your interest, support, participation and unflagging loyalty over the years. Your contributions helped make Current.com a vibrant place for discussing thousands of interesting stories, and your continued viewership motivated us to keep innovating and find new ways to reflect the voice of the people. We now welcome the on-air and digital presence of Al Jazeera America, a new news network committed to reporting on and investigating real stories affecting the lives of everyday Americans in every corner of the country. Thank you for inspiring and challenging us. – The Current TV Staff

Pentagon Set To Track Social Media Doubt the power of social media? The Pentagon doesn’t. A new project from the Defense Advanced Research Projects Agency focuses on social media tracking. It’s possible you haven’t heard of The Defense Advanced Research Projects Agency (DARPA). It seems like DARPA would have more important things to do than track tweets, but a new project, titled the Social Media in Strategic Communication, suggests that DARPA may spend up to $42 million on a project designed to track social media. In other words, what happened in Egypt was enough to spook the American government. What will the project include? “1. and concepts (memes), and (b) purposeful or deceptive messaging and misinformation. 2. sites and communities. 3. 4. To accomplish these goals, DARPA identifies various strategies it will use, including modeling communities, content generation, crowd sourcing and social media bots. It sounds more like the plot for a sci-fi movie starring Matt Damon than it does a concrete military plan.

Love Lulz & Cyanide If an Agent Knocks: Federal Investigators and Your Rights by the Feature Picture by Maddy Miller People opposing U.S. policies in Central America, giving sanctuary to refugees from Guatemala and El Salvador, struggling for Black liberation, and against nuclear weapons, are today more than ever likely to receive visits from FBI agents or other federal investigators. Increasingly, agents are also visiting the familist, friends, and employers of these activists. Political intelligence is information collected by the government about individuals and groups. No. In 1976, FBI guidelines regulating the investigation of political activities were issued by Attorney General Edward H. The report exposed the FBI’s counter-intelligence program (COINTELPRO) under which the agency infiltrated groups, compiled dossiers on, and directly interfered with individuals engaged in activities protected by the First Amendment rights to freedom of expression and association. The FBI COINTELPRO program was initiated in 1956. 1. 2. 3. Never without a lawyer. Published by

Who are the hunger strikers? How prisoners land in Pelican Bay’s SHU by Jean Casella and James Ridgeway An aerial view of Pelican Bay State Prison – Photo: California Department of Corrections Sympathy for the prisoners on hunger strike in the Security Housing Unit at Pelican Bay State Prison is limited due to the widely held impression that these men — and indeed most supermax prisoners — are the “worst of the worst.” According to conventional wisdom, in order to land in the most secure units in the prison system, these men must have committed terrible crimes in the first place and then compounded them by committing further violent acts while in prison. How else could they end up in long-term solitary confinement, locked up 22 1/2 hours a day in 8 by 10 cells for years or even decades? In fact, as we’ve written many times before, solitary confinement is now a disciplinary measure of first rather than last resort in most state prison systems. “CDCR asserts that the lockdown and snitch policy are required for the safety and security of the institution.

New Zealands Three Strikes Law was Pushed, Bought and Paid for by the US - Wikileaks The slow trickle of leaked diplomatic cables from Wikileaks may not be in the headlines as much as it was when it started, but revelations keep pouring out of the website. Recently, new diplomatic cables published on the site revealed just how, not only influential the US was, but just how much control the US had over the passage of the three strikes law in New Zealand. If there wasn’t any anti-American sentiment before in New Zealand, there certainly will be for some after new diplomatic cables were published revealing the role the US had in pushing for a three strikes law in New Zealand. A diplomatic cable that was sent clear back in 2005 shows that the US was offering up money to put in new copyright laws. In another cable in 2005, we see the US saying that establishing fair use type laws being a bad idea: It’s ironic that they would view fair use provisions like this as something that would discourage innovation since fair use in the US brings in billions to the economy. Have a tip?

Why Twitter Was the Only Company to Challenge the Secret WikiLeaks Subpoena Alexander Macgillivray" />Secret subpoenas* information requests of the kind the Department of Justice sent Twitter are apparently not unusual. In fact, other tech companies may also have received similar WikiLeaks-related requests. But what is unusual in this story is that Twitter resisted. Twitter’s general counsel comes out of Harvard’s prestigious Berkman Center for Internet and Society, the cyber law powerhouse that has churned out some of the leading Internet legal thinkers. After Harvard, Macgillivray worked as a litigator for Silicon Valley super-firm Wilson Sonsini Goodrich & Rosati before moving to Google, where he first spearheaded legal issues for products like Search and Gmail. Twitter wooed Macgillivray away from Google in the summer of 2009, and he now heads a 25-person legal team. Macgillivray also curates a Twitter list of the primary thinkers tangling with cyber issues, and he has occasionally returned to Berkman to guest lecture or speak on topics of the day.

Are You Being Tracked? 8 Ways Your Privacy Is Being Eroded Online and Off | Media December 28, 2011 | Like this article? Join our email list: Stay up to date with the latest headlines via email. In a recent hearing before the Senate Judiciary Committee, Sen. Few people have ever heard about CIQ. Carrier IQ, located in Mountain View, CA, was founded in 2005 and is backed by a group of venture capitalists. At the hearing, Sen. Following Muller’s Senate testimony, Andrew Coward, Carrier IQ’s VP of marketing, told the Associated Press that the FBI is the only law enforcement agency to contact them for data. CIQ is emblematic of a growing number of ongoing battles that delineate the boundary of what, in the digital age, is personal, private life and information. 1. Sen. According to the company, its software is designed to improve mobile communications. Making matters worse, Carrier IQ attempted to silence Eckhart with a cease-and-desist letter, demanding he replace his analysis with a statement disavowing his research.