A WAY WITH WORDS #32. A WAY WITH WORLDS: CRIME AND PUNISHMENT (and a lot of other stuffBy Steven Savage Archives available at The Way With Worlds Home Page One thing that can get overlooked in worldbuilding is legal systems. 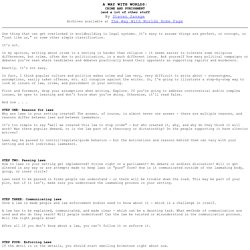 It's easy to assume things are perfect, or corrupt, or "just like us," or some other simple classification. It's not. In my opinion, writing about crime in a setting is harder than religion - it seems easier to tolerate some religious differences, but crime, often due to politicization, is a much different issue. Ask yourself how many political campaigns or debates you've seen where candidates and debates practically brand their opponents as supporting rapists and murderers. Exactly. In fact, I think popular culture and politics makes crime and law very, very difficult to write about - stereotypes, assumptions, easily taken offense, etc. all conspire against the writer. First and foremost, drop your assumptions when writing.

And now . . . Law enforcement is not an easy thing. A WAY WITH WORDS #33. A WAY WITH WORLDS: MORE CRIME AND PUNISHMENTBy Steven Savage Archives available at The Way With Worlds Home Page Well the last column on crime, law, and punishment in one's continuity generated the most feedback I've had period. 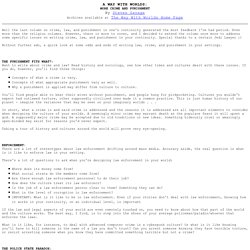 Even more than the religion columns. However, there is more to cover, and I decided to extend the column once more to address some specific issues on writing crime, law, and punishment in your continuity. Worldbuilding: Timelines. Note: this is part of a series on worldbuilding. 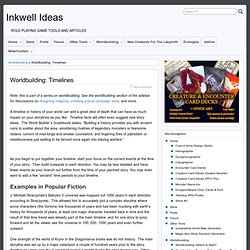 See the worldbuilding section of the sidebar for discussions on designing religions, creating a local campaign area, and more. A timeline or history of your world can add a great deal of depth that can have as much impact on your storylines as you like. Timeline facts will often even suggest new story ideas. The World Builder’s Guidebook states, “Building a history provides you with ancient ruins to scatter about the area, smoldering rivalries of legendary monsters or fearsome raiders, rumors of mad kings and sinister counselors, and lingering fires of patriotism or rebelliousness just waiting to be fanned once again into blazing warfare.” As you begin to put together your timeline, start your focus on the current events at the time of your story.

Examples in Popular Fiction J. One strength of the world of Krynn in the Dragonlance books was its rich history. The Lord of the Rings series also had a rich history. References/Further Reading: Worldbuilding Reference: Cultural Quirks. By Joe Wetzel (joewetzel at gmail dot com) A portion of the Papyrrus of Ani from the Egyptian Book of the Dead. 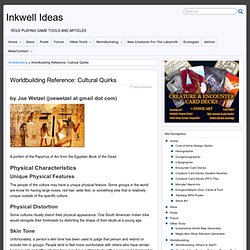 Economie. Creer sa carte. How to Design Your Climates. How to Create a Unique Magic System for Your Book: 6 steps. Edit Article Edited by Jonta, Maluniu, Grendle, Anonymo and 14 others Ever feel that books such as Harry Potter have taken all the good Magic set-ups in books? 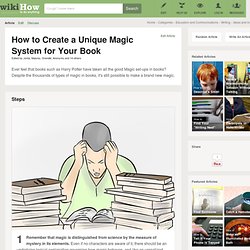 Despite the thousands of types of magic in books, it's still possible to make a brand new magic. Ad Steps 1Remember that magic is distinguished from science by the measure of mystery in its elements. 6Write your book and remember to follow your own guidelines! Tips Use abstract thinking. Warnings Use care when borrowing ideas from others. Dos and Don'ts For Fantasy/Sci-Fi Writers. Dos and Don'ts For Fantasy/Sci-Fi Writers Fantasy Specific Writing good, well thought-out fantasy can be a challenging process, especially when featuring a setting or race completely different from that which is familiar to the author. 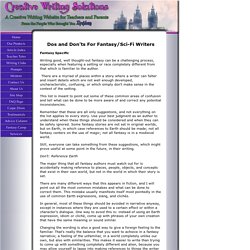 Ozak voyage. The Logistics of World Building: Algebra for Fantasy Writers. There are days—horrible, dark days—when I end up doing more algebra than writing. 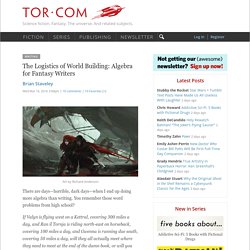 You remember those word problems from high school? If Valyn is flying west on a Kettral, covering 300 miles a day, and Ran il Tornja is riding north-east on horseback, covering 100 miles a day, and Gwenna is running due south, covering 50 miles a day, will they all actually meet where they need to meet at the end of the damn book, or will you need to rewrite the whole ass end of the thing? World building ressources. Writing a Fantasy Novel - Useful Resources. Writing a fantasy novel involves many considerations: Worldbuilding, avoiding clichés of the genre, using popular elements such as magic originally and more. 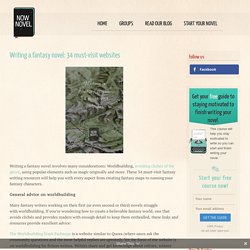 These 34 must-visit fantasy writing resources will help you with every aspect from creating fantasy maps to naming your fantasy characters. General advice on worldbuilding. Day 1: Climate & Variety. Climate and Variety How often have you read a book or story on "the ice planet" or "the desert planet"? 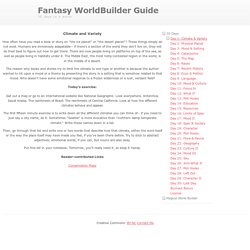 These things simply do not exist. Humans are immensely adapatable-- if there's a section of the world they don't live on, they will do their best to figure out how to get there. There are now people living on platforms on top of the sea, as well as people living in habitats under it. The Middle East, the most hotly-contested region in the world, is in the middle of a desert. The reason why books and stories try to limit the climate to one type or another is because the author wanted to hit upon a mood or a theme by presenting the story in a setting that is somehow related to that mood.

NaNoWriMo World Building Resources - The Writersaurus. FacebookTwitterGoogle+PinterestRedditTumblrEmailShare So you’ve got the characters figured out and your plot nearly perfect for your NaNoWriMo project this year. 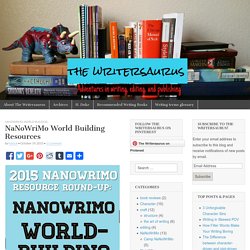 A way with worlds. Naming months in your fictional calendar. Creating a fictional calendar. Questions to guide you in worldbuilding for fantasy or science-fiction — Veronica Sicoe. I’ve been busy worldbuilding this week. It’s one of my favorite things to do in the process of writing sci-fi, and it makes me all giddy and drooly like a kid that’s been dropped into a toybox.

Since I revisited my collected materials for the worlds I’m writing in, and have overhauled one of these entirely, I grabbed the opportunity to put together a list of important worldbuilding questions to share with you. Not every author goes about worldbuilding the same way — and that’s perfectly fine, since not every genre needs it, and not every story is focused primarily on the setting. Also, not all aspects of a world or society are equally relevant to that particular plot. But even if you’re only using the setting as a wallpaper, you still need to understand how it works and why, so that you don’t accidentally slip and kill the reader’s suspension of disbelief.

So buckle up, and let’s go. Geography 1. Fictional Culture. The way I build worlds is by collecting cool stuff from the history, myth and people around me. I blend these details with my own imagination, and create my own cultures. Culture is a vital part to realistic worldbuilding. Normally there are a few particular cultures that interest me at a given time. I read whatever I can find about them, their environment, their traditions and their myths. Writing Tools - World-Building Leviathan.

My biggest problem with worldbuilding is that, for me, it's very easy to get distracted. There's all these little details and things to consider, and I end up drowning in a sea of interconnected facts that, nonetheless, do not spawn a coherent and entertaining story on their own. There are a lot of world-building worksheets out there; this one is a little different. This world-building leviathan, so called because it is a many-tentacled thing that expands as you work on it and eventually creeps into every corner of your brain -- this world-building leviathan is designed with natural segue into writing one (or more) specific novels or series of novels. In other words, this world-building creature requires that you have an outline. That process is built into the worksheet and you will need at least some kind of a coherent idea of the story you want to tell before you even begin. This worksheet was originally designed as a 1-task-per-week thing, so there are 52 questions.

Créer une prophécie. To keep in mind when writing our own History. How to build a fictional world - Kate Messner. The world building strategies of popular books like Lord of the Rings and Harry Potter have been analyzed in great detail by writers and critics alike. The NPR piece “At Home in Fantasy’s Nerd-Built World” continues the conversation, taking a look at the magical creation of George R. R. Martin’s world in Game of Thrones. If you’re ready to create your very own fictional world, it’s great to start by reading lots of examples – and read like a writer, studying the craft of world building. Pay attention to the details and ask yourself why the author might have made the choices he or she did. Limyaael Rants Archive - Curiosity Quills Press. Sun, Moon, & Rainbow. World-Building #1.