AustLit: The Australian Literature Resource Home Page. Literature from Librarians: Great Reads Written by the Experts. This is a unique reading list - these books were all written by librarians and most of them were recommended to us by librarians. 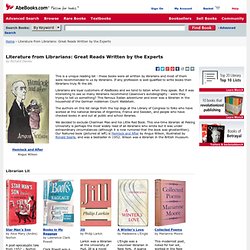 If any profession is well qualified to write books then librarians truly fit the bill. Librarians are loyal customers of AbeBooks and we tend to listen when they speak. But it was interesting to see so many librarians recommend Casanova's autobiography - were they trying to tell us something? This famous Italian adventurer and lover was a librarian in the household of the German nobleman Count Waldstein.

The authors on this list range from the top dogs at the Library of Congress to folks who have worked at the national libraries of Argentina, France and Sweden, and people who have checked books in and out at public and school libraries. We decided to exclude Chairman Mao and his Little Red Book. Star Man's Son by Alice Mary (Andre) Norton A post-apocalyptic tale from 1952 – Norton was a librarian in Cleveland and the Library of Congress. Jill by Philip Larkin. The Best Literary Magazines & Journals.

Everyone knows about The New Yorker. 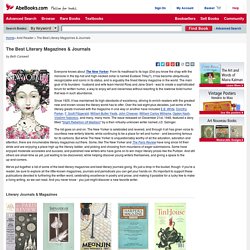 From its masthead to its logo (Did you know the chap with the monocle in the top-hat and high-necked collar is named Eustace Tilley?) , it has become ubiquitously recognizable and iconic in its status, and is arguably the finest literary magazine in the world. The main goal of its founders - husband and wife team Harold Ross and Jane Grant - was to create a sophisticated forum for written humor, a way to enjoy wit and cleverness without resorting to the lowbrow toilet humor that was in such abundance.

Since 1925, it has maintained its high standards of excellency, striving to enrich readers with the greatest new and known voices the literary world has to offer. Over the last eight-plus decades, just some of the literary greats involved with the magazine in one way or another have included E.B. The list goes on and on. We've put together a list of some of the best literary magazines and best literary journals going. The Paris Review You know this one. Words Without Borders: Current Issue. Image: Do Ho Suh, "Fallen Star," 2012 © Do Ho Suh. 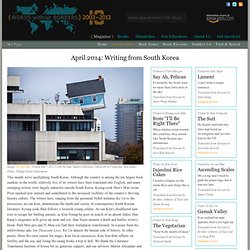 Stuart Collection, University of California, San Diego. Photo: Philipp Scholz Rittermann This month we're spotlighting South Korea. Although the country is among the ten largest book markets in the world, relatively few of its writers have been translated into English, and many emerging writers were largely unknown outside South Korea. Kyung-sook Shin's Man Asian Prize sparked new interest and contributed to the increased visibility of the country's thriving literary culture. Elsewhere, we present poetry by two exiled writers, Iraqi Manal Al-Sheikh and Palestinian Mazen Maarouf, as well as the sixth and final installment of Sakumi Tayama's tale of an accidental medium.

Xu Zechen’s “Running through Beijing” Reviewed by Andrew Rose To the average Westerner, reared on crisp autumn breezes and revitalizing spring air, Beijing’s tianqi, its weather, is a surreal departure. The Los Angeles Review of Books. Salon.com Books. McSweeney’s: Quarterly & Books. Timothy McSweeney’sQuarterly Concern McSweeney’s began in 1998 as a literary journal that published only works rejected by other magazines. 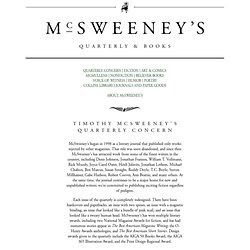