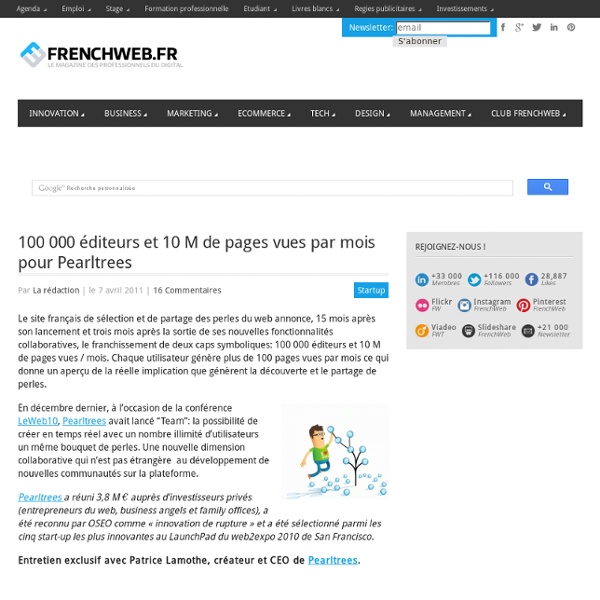 storyboards What is a storyboard? Once a concept or script is written for a film or animation, the next step is to make a storyboard. A storyboard visually tells the story of an animation panel by panel, kind of like a comic book. The Curation Buzz... And PearlTrees Posted by Tom Foremski - April 12, 2010 My buddy Dave Galbraith is the first person I remember to first start talking about curation and the Internet, several years ago. He even named his company Curations, and created a tool/site for curation: Wists. And his site SmashingTelly - is great example of curation, a hand-picked collection of great videos. Today, much is written about curation and the Internet but it all seems mostly talk because we don't really have the tools we need. Curation seems to be just a new way to describe things like blogging and "Editor's Picks."

Eisenstein's montage theory Montage--juxtaposing images by editing--is unique to film (and now video). During the 1920s, the pioneering Russian film directors and theorists Sergei Eisenstein and Dziga Vertov demonstrated the technical, aesthetic, and ideological potentials of montage. The 'new media' theorist Lev Manovich has pointed out how much these experiments of the 1920s underlie the aesthetics of contemporary video.

Crochet a Gorgeous Mandala Floor Rug In this tutorial we’ll be making a beautiful crochet rug, made from T-shirt yarn. The pattern uses US terms and stitches include slip stitch (sl st); double crochet (dc); chain (ch); increase (inc) and a magic ring. T-shirt yarn (also called Zpagetti) in two colours that complement each other. You'll need about threes cones of yarn in total.A crochet hook in a size suitable for t-shirt yarn. I'm using a 15mm hook.A large darning needle for sewing in the ends.A pair of scissors. Using the main colour yarn, make a magic ring and secure with a stitch. Pearltrees Once Again Evolves The Way We Bookmark Our Favorite Sites A few months ago, I wrote here about a new startup coming from France that would change the way that we view social bookmarking. In fact, it would probably change the paradigm to which we have been accustomed to – clicking a link on our browser and going to Digg, Del.icio.us or StumbleUpon and dropping in the link to share with our friends and others on the Internet. That startup was called Pearltrees and last week at the Web 2.0 Expo in San Francisco, they announced what they consider to be a major new feature that would help make it easier for people to share their bookmarks on a whole new level.

colonizing virtual reality Chris Chesher Introduction New technologies do not appear from nowhere as a mystical spark of inspiration from the mind of one individual. Nor are they inevitably accepted for their self-evident benefits. A technology emerges through a process involving broader cultural, linguistic, institutional and technological contexts. One clear illustration of this process can be drawn with the appearance of "virtual reality" in 1989, and the subsequent popularization of the idea through the media. On June 7, 1989 the computer-aided design software company Autodesk and the eclectic computer company VPL announced a new technology called "virtual reality."1 In marketing this new technology (which represented a major shift in thinking about the nature of computers), the developers and promoters drew on a range of tropes:

Pearltrees Certified Site Metrics are metrics that are directly-measured from the website instead of estimated. The website owner has installed an Alexa Certify Code on the pages of their site and chosen to show the metrics publicly. For the website owner Certified Metrics provide: A more accurate Alexa RankA private metrics Dashboard for On-Site AnalyticsThe ability to publish unique visitor and pageview counts if desired List of psychic abilities This is a list of psychic abilities that have been attributed to real-world people. Many of these are also known as extrasensory perception or sixth sense. There is no evidence that psychic abilities exist, and they are not recognized by the scientific community. Superhuman abilities from fiction are not included.

Pearltrees: Curation Tool Drops Flash And User Interface For Pintrest-like Format -SVW Posted by Tom Foremski - May 23, 2014 Pearltrees (a former consulting client) this week introduced the 2.0 version of its popular web page curation tool built completely with HTML 5.0 and with a completely different user interface and metaphor. The tool now represents web pages as a series of rectangles in a "dynamic grid" allowing users to quickly organize and share their web collections. The prior interface was based on circles, or "pearls" connected in a molecular pattern to other "pearls." Sometimes new users thought it looked complicated and the user interface change simplifies people's first impressions. Patrice Lamothe, CEO and co-founder of Pearltrees (above) said the new interface in the latest version makes the tool more powerful and useful because of the drag and drop features, improved sharing, and content discovery technologies.