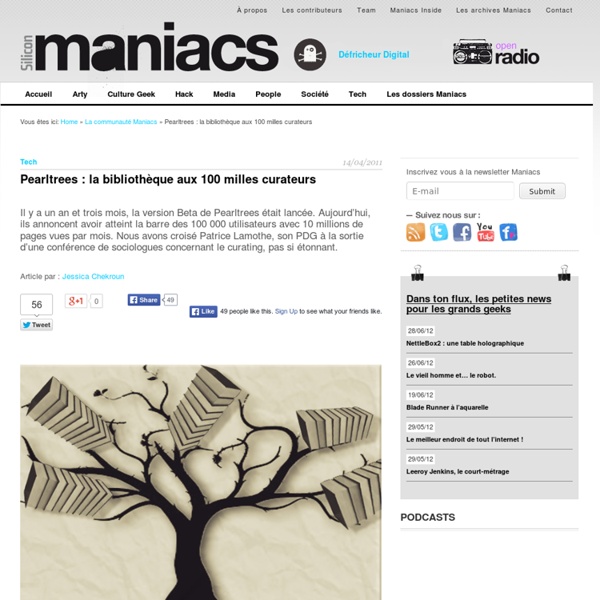 Product Strategy Means Saying No If you’re building a product, you have to be great at saying No. Not ‘maybe’ or ‘later’. The only word is No. Cluster analysis The result of a cluster analysis shown as the coloring of the squares into three clusters. Cluster analysis or clustering is the task of grouping a set of objects in such a way that objects in the same group (called a cluster) are more similar (in some sense or another) to each other than to those in other groups (clusters). It is a main task of exploratory data mining, and a common technique for statistical data analysis, used in many fields, including machine learning, pattern recognition, image analysis, information retrieval, and bioinformatics.

Keeping your Mac locked down: a Mac OS X security primer: Page 1 Apple's approach to security can be a little bewildering at times. It's a well-trumpeted aspect of the OS, marketed in detail on the website. Mac OS X has integrated smartcard support and Apple has certified the OS under the Common Criteria guidelines; a section of Apple's developer site is devoted to the subject of security. At the same time, Apple didn't offer cryptographically signed software updates until its hand was forced in July 2002. The company is notorious for boiling down release notes for software updates to "provides bug fixes and security updates" (although the separate mailings posted to the security-announce list do tend to offer a little more detail). While other Unix distributions tend to patch holes in open-source code relatively quickly, Apple sometimes delays rolling out a security fix in the open-source components of Mac OS X for months or even years.

Le travail collaboratif : comment créer les conditions favorables ? - techtoc.tv, web-tv Dans la foulée du premier plateau sur la collaboration en entreprise, cette seconde partie explorera les conditions pour créer un environnement propice à la collaboration. Qui doit le mettre en place ? Et comment ? Pour répondre à l'invitation à participer à ce tournage, veuillez sélectionner l'option appropriée ci-dessous. I confirm my response, and also send a word to the organizers: Below, I explain my motivation to the organizers: Pearltrees: 3 years and €8.5 million later, there's finally talk of a business model In Europe, as many of you may already know, people tend to talk about business models much earlier in the game than they do in the US. In fact, it’s a widely-held belief that European investors don’t tend to invest in companies that aren’t generating cash (which many believe explains the French VCs’ love for e-commerce). While US companies like Instagram, Pinterest, Quora and the likes are busy amassing millions upon millions of non-paying users prior to even talking about their business models (oh wait, Pinterest actually does make money?)

grid scale In his book Cybernetics, mathematician Norbert Wiener asked “How is it that thousands of neurons or fireflies or crickets can suddenly fall into step with one another, all firing or flashing or chirping at the same time, without any leader or signal from the environment?” The question is at the heart of many network theories, which try to understand how a large number of interacting systems enter into collective and synchronized behavior. In Physical Review Letters, Martin Rohden and colleagues at the Max Planck Institute in Göttingen, Germany, use network theory to study the synchronization properties of electric power grids.

How to Stop Facebook from Sharing Your Information With Third Parties I went through each individual application on my FB and, much to my surprise, Gawker Media apps were by far the worst offenders when it comes to privacy violations. The Gawker apps access far more information than any other application on my list, about both me and my friends. Worse, unlike any other application, it actually DID access my information. All of the following are required to use Gawker Media apps on Facebook: Access my basic information Includes name, profile picture, gender, networks, user ID, list of friends, and any other information I've shared with everyone.

PAD_0 : PT pas content Connected. This pad seems to be opened in more than one browser window on this computer. Reconnect to use this window instead. Your permissions have changed while viewing this page. Try to reconnect. There are communication problems with the synchronization server.

i doubt they need anyone to pay for this anymore. a drastic change like this can only logically indicate to rational thinkers that their dirt cheap funds have already been deposited in each respective account. by aroman Jun 8