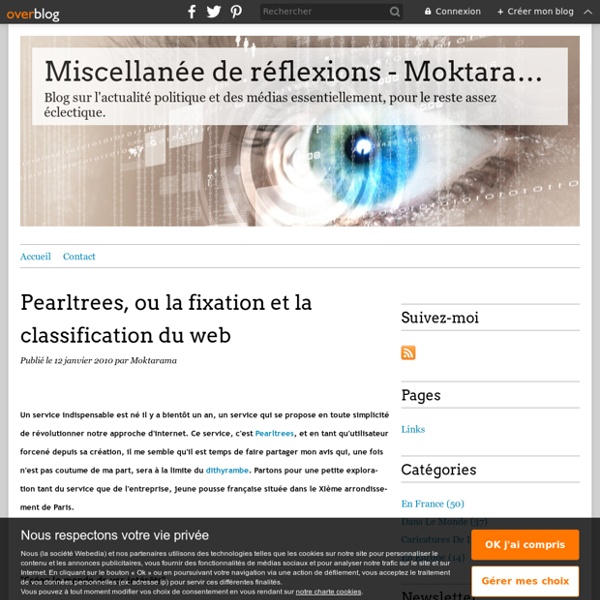 Identifying emotions based on brain activity and machine-learning techniques The image shows the average positions of brain regions used to identify emotional states (credit: Karim S. Kassam et al./Carnegie Mellon University) Scientists at Carnegie Mellon University have identified which emotion a person is experiencing based on brain activity. Pearltrees Visualizes How You Organize the Web This post is part of Mashable's Spark of Genius series, which highlights a unique feature of startups. If you would like to have your startup considered for inclusion, please see the details here. The series is made possible by Microsoft BizSpark. Name: Pearltrees Quick Pitch: Pearltrees is a new visual way to organize content on the Web and connecting people's interests.

Etherpad No more sending your stuff back and forth via email, just set up a pad, share the link and start collaborating! Etherpad allows you to edit documents collaboratively in real-time, much like a live multi-player editor that runs in your browser. Write articles, press releases, to-do lists, etc. together with your friends, fellow students or colleagues, all working on the same document at the same time. Entity–relationship model An entity–relationship diagram using Chen's notation In software engineering, an entity–relationship model (ER model) is a data model for describing the data or information aspects of a business domain or its process requirements, in an abstract way that lends itself to ultimately being implemented in a database such as a relational database. The main components of ER models are entities (things) and the relationships that can exist among them, and databases. Entity–relationship modeling was developed by Peter Chen and published in a 1976 paper.[1] However, variants of the idea existed previously,[2] and have been devised subsequently such as supertype and subtype data entities[3] and commonality relationships.

With the Traveling Geeks @ Pearltrees The Traveling Geeks met with Patrice Lamothe from Pearltrees (@pearltrees) for nearly two hours at the beginning of the Traveling Geeks tour. This guy is running the Internet startup buzz playboo k like perfect, at least for a French startup: he did a tour in the Silicon Valley visiting local influencers and bloggers, sponsored the Traveling Geeks and Leweb, talking at Leweb in plenary session (twice…), creating plug-ins, buttons, that can be placed everywhere on social sites, his site is in English, and so on. As a result, he got heck of a good visibility. And we were very kindly welcomed in the company which looks like an US startup: lots of coffee and… US sized patisserie. The company raised $3m of funding (2m€) out of business angels and family offices.

Rosalind Picard Rosalind Wright Picard (born May 17, 1962)[1] is an American scholar who is Professor of Media Arts and Sciences at MIT, founder and director of the Affective Computing Research Group at the MIT Media Lab, and co-founder of the startups Affectiva[2] and Empatica.[3] In 2005, she was named a Fellow of the Institute of Electrical and Electronics Engineers.[4] Picard is credited with starting the branch of computer science known as affective computing[5][6] with her 1997 book of the same name. This book described the importance of emotion in intelligence, the vital role human emotion communication has to relationships between people, and the possible effects of emotion recognition by robots and wearable computers.[7] Her work in this field has led to an expansion into autism research and developing devices that could help humans recognize nuances in human emotions.[8] Academics[edit] Affective computing[edit]

Pearltrees Dives Into Social Curating With Pearltrees Team Content curation and mapping service Pearltrees has decided to focus on the fact that people want to do things in groups and has as of today upgraded its core product with a groups functionality, called Pearltrees Team. Now accesible just by logging in, Pearltrees Team allows you to hook up with other people in order to create a Pearltree collaboratively in realtime. Ideally this goes down as such: You really care about fashion so you search for fashion in the Pearltrees search box and are confronted with really elaborate visual cluster displays of fashion blogs, each blog its own “pearl.” You decide that anyone who likes The Sartorialist is probably a good egg and click on the puzzle piece in the Pearltrees detail window in order to ask if you can join the team.

Why violin makers adopted the f-shaped hole Why did violins slowly develop f-shaped sound-holes? Because it makes them more acoustically powerful than their ancestors, which had holes shaped liked a circle -- as a team of MIT scientists recently concluded. Back in the the 10th century, the makers of European stringed-instruments were building "fitheles" -- the ancestor of the modern violin -- but they used round holes. The Curation Buzz... And PearlTrees Posted by Tom Foremski - April 12, 2010 My buddy Dave Galbraith is the first person I remember to first start talking about curation and the Internet, several years ago. He even named his company Curations, and created a tool/site for curation: Wists. And his site SmashingTelly - is great example of curation, a hand-picked collection of great videos. Today, much is written about curation and the Internet but it all seems mostly talk because we don't really have the tools we need. Curation seems to be just a new way to describe things like blogging and "Editor's Picks."