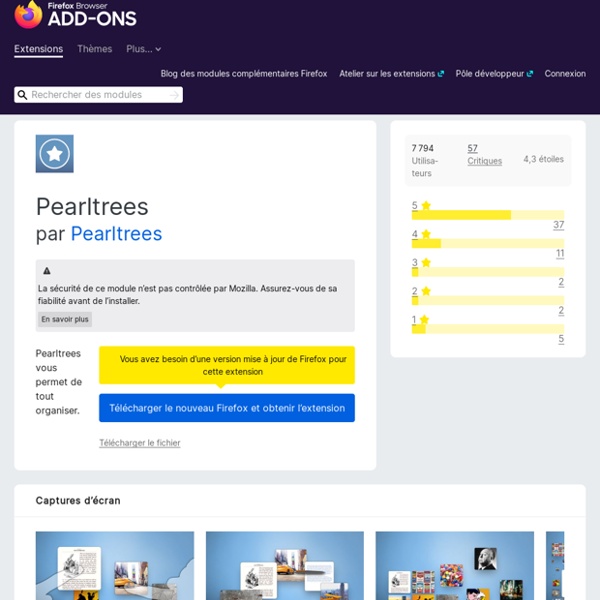 With the Traveling Geeks @ Pearltrees The Traveling Geeks met with Patrice Lamothe from Pearltrees (@pearltrees) for nearly two hours at the beginning of the Traveling Geeks tour. This guy is running the Internet startup buzz playboo k like perfect, at least for a French startup: he did a tour in the Silicon Valley visiting local influencers and bloggers, sponsored the Traveling Geeks and Leweb, talking at Leweb in plenary session (twice…), creating plug-ins, buttons, that can be placed everywhere on social sites, his site is in English, and so on. As a result, he got heck of a good visibility. And we were very kindly welcomed in the company which looks like an US startup: lots of coffee and… US sized patisserie. Top Scientific Conferences and Journals in InfoVis These are the top conferences and journals in the field of information visualization. It is intended as a supplement to my advice on breaking into the InfoVis scientific community, and gives newcomers an idea of the various venues to follow and submit to beyond the eponymous IEEE InfoVis conference. Since InfoVis research spans multiple areas, I have added multiple sections for not only InfoVis and visual analytics (VA), but also human-computer interaction (HCI) as well as application areas. Furthermore, I have arranged the conferences and journals in the list below roughly in order of prominence.

Pearltrees Visualizes How You Organize the Web This post is part of Mashable's Spark of Genius series, which highlights a unique feature of startups. If you would like to have your startup considered for inclusion, please see the details here. The series is made possible by Microsoft BizSpark. Name: Pearltrees Direction Angrignon: a different kind of subway map The photo above (click here for a zoomable version) is a collage of panoramic scans of the Angrignon-bound platforms of the Montreal metro’s green line. I used my phone to record videos from the rear-most window of the train and wrote a bit of software to stitch the frames together. My goal was to create a way to figure out where to stand while waiting for the metro so as to get out closest to where you want to go at your destination, and I used these scans to build a little interactive comparison page for just this purpose.

Pearltrees releases a new version, without any pearls nor trees The Paris-based startup founded in 2009 once declared: “We focus on the visual potential of Pearltrees to let people dive deeply into their interests and nearly feel them”. Their product, offering a digital curation tool, was unique because of the visual interface voluntareely original: links and folders symbolized by rounded pearls attached together like the branches of a tree. Today, pearls and trees have disappeared to make room for a brand new and larger organisation tool. Two years ago, everyone wanted to build products around “curation” and “interest graph”.

Pearltrees Dives Into Social Curating With Pearltrees Team Content curation and mapping service Pearltrees has decided to focus on the fact that people want to do things in groups and has as of today upgraded its core product with a groups functionality, called Pearltrees Team. Now accesible just by logging in, Pearltrees Team allows you to hook up with other people in order to create a Pearltree collaboratively in realtime. Ideally this goes down as such: You really care about fashion so you search for fashion in the Pearltrees search box and are confronted with really elaborate visual cluster displays of fashion blogs, each blog its own “pearl.” Chromogram To investigate how participants in Wikipedia allocate their time, we created a visualization technique, the Chromogram, that can display very long textual sequences through a color coding scheme. The first three letters of a string determine color in a Chromogram. The first letter determines the hue; the second letter the saturation, and the third the brightness. Saturation and brightness were both kept in a restricted range so that the hue was easily perceived. Numbers map to shades of gray.

The Curation Buzz... And PearlTrees Posted by Tom Foremski - April 12, 2010 My buddy Dave Galbraith is the first person I remember to first start talking about curation and the Internet, several years ago. He even named his company Curations, and created a tool/site for curation: Wists. And his site SmashingTelly - is great example of curation, a hand-picked collection of great videos. Today, much is written about curation and the Internet but it all seems mostly talk because we don't really have the tools we need. Hadoop Illuminated You probably heard the term Big Data -- it is one of the most hyped terms now. But what exactly is big data? Big Data is very large, loosely structured data set that defies traditional storage 3.2. Human Generated Data and Machine Generated Data Human Generated Data is emails, documents, photos and tweets.

Pearltrees brings curation to next level, adds Team feature As the Internet grows, finding content that's relevant to you becomes tougher. Sure, there's your basic Web search and then there's aggregation, similar to what Google and Yahoo do with news headlines. But another form of information discovery is starting to gain some momentum: curation. pearltrees, socializing and curating content on the web Content of any type is not useful unless you can find it, organize it and interact with it. In the enterprise companies have tried many different schemes to try and get business content collected in a central repository, organized, tagged, version controlled, and searchable. This has often taken the route of "content management" systems. Content management systems to varying degrees, do an adequate job of getting some content into a controlled system environment. There are challenges with content management systems on two fronts though, getting content into the system in the first place (getting employees to participate in inputting content in some way) and getting the right content into the hands of the person who actually needs it.

Curation Becomes Social: Pearltrees Launches 'Team' Version Posted by Tom Foremski - December 7, 2010 [For much of this year I have been working with Pearltrees, which offers a visual web site curation service based on the visual metaphor of 'pearls' please see below for an example.] Pearltrees this week launched a "Team" version of its curation service that allows groups of people to collaborate on curating a topic. Up until now each Pearltree was the responsibility of one person. Alexia Tsotsis at Techcrunch reported: Ideally this goes down as such: You really care about fashion so you search for fashion in the Pearltrees search box and are confronted with really elaborate visual cluster displays of fashion blogs, each blog its own “pearl.”

Pearltrees, the Social Curation Tool If there is one thing I like about koozies, that is their ability to become a unique and personalized gift. Regardless of where you will be handing them out, a koozie can be ideal memento for any occasion, whether it be for a get-together, corporate party, fundraiser, or a sports celebration. A koozie is a highly functional and innovative product recognized for its many uses. Koozies at www.getkoozies.com can embellished with a design of your own choosing. You will be given the opportunity to select the design that you want to be printed on the koozies. So, for instance, if you will be using them for a fundraising event, you can have a personalized message imprinted on them.