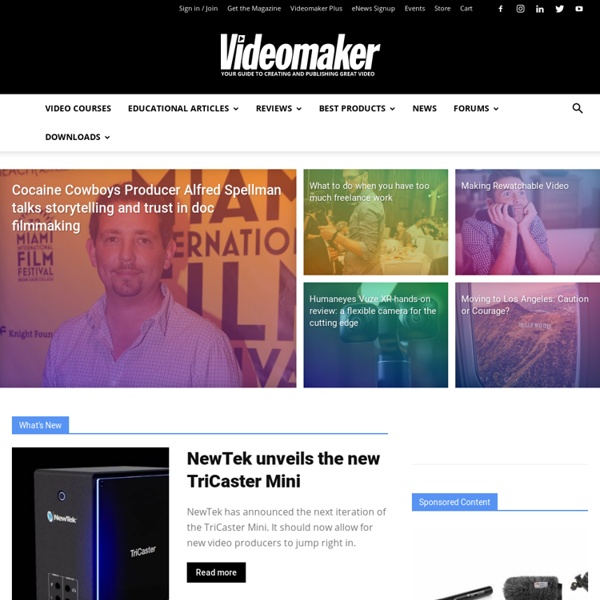 Video Green Screen Chromakey Essentials Shooting great green screen shots and pulling clean chromakeys may seem daunting to the uninitiated, but with the continual improvements the industry has made to camera and editing technology, going green is easier than ever. A producer with a high quality video camera and an editing application like Adobe Premiere, Apple Final Cut Pro, or Sony Vegas, already has the expensive parts covered. The rest is paint, light and technique. The good news is that the greatest difference between gorgeous green screen shots and crummy chromakeys isn’t about the cost of equipment.

202 DIY Filmmaking Tutorials Why buy it when you can build it? Well… most of the time you don’t have a choice. Other times it’s just way too much fun! In our first DIY (“Do It Yourself”) featured list we will focus on the production side of filmmaking. Stay tuned for other DIY featured lists on screenwriting, financing, editing and more. Reading Comprehension Worksheets "Your reading comprehension materials are the best I've found on the web. They are so thorough and comprehensive! My students and I have learned a lot from them. Thanks so much!" -- Susan B., Carter, KY. 03/21/12 Like these materials?

James Horner: Soundtrack James Horner won two Academy Awards for his work on ‘Titanic’ (Reuters) If you love movies, then you know the music of James Horner. The Academy Award-winning composer died in plane crash Monday at the age of 61, leaving behind a breathtaking body of work that included more than 100 movie scores, among them such celebrated films as Aliens, Glory, Apollo 13, Braveheart, and of course Titanic, which won him Oscars for Best Score and Best Song, for the soaring, singular ballad “My Heart Will Go On.” 666 DIY Horror Filmmaking Tutorials It’s that time of year again, so we thought it was time to update last years killer feature “Horror Filmmaking: From Script to Scream.” That’s right a sequel! This time we are narrowing the focus a bit and concentrating on the DIY (Do It Yourself) elements.

10 Films That Can Teach You Everything You Need To Know About Film Editing Editing is a selection process. Sometimes hundreds of hours of footage are captured, and we only end up seeing around two hours of it. It’s also a language that has rules. When done badly it can cause boredom or, even worse, confusion. The importance of editing cannot be underestimated. According to acclaimed film writers David Bordwell and Kristin Thompson, the typical Hollywood film has between 1000 and 2000 shots that have been cut together.

Free English Reading comprehension tests and exercises online Reading comprehension is also an important part when you take an English test. Reading comprehension test can help you to improve vocabulary, grammar, and logical thought ability. There are some tips for you to improve reading skills: - Practice reading every day. CrazyTalk Animator - 2D Character Animation and Cartoon Software CrazyTalk Animator provides an exciting new approach to traditional 2D animation with innovative new tools that allow users to apply 3D motions to 2D characters. New powerful tools have opened new possibilities for freely editing 2D motions and viewing them from any angle with a single click. Combined with functional features like facial puppet and auto lip-sync, it has become the most creative software for 2D character animation. Movie & Video Creators The video creator's arsenal of cartoon creation tools with professional real-time automatic animation.