After 20 Years, “Friday” Is (Still) The Most Important Film Ever Made About The Hood - BuzzFeed News. Inside Alfred Hitchcock’s Lost Holocaust Documentary. The truth about what happened is far worse—in fact, it's a scandal. 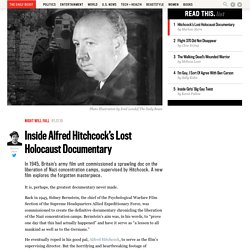 A year gone by, and there is not a trace. At 12:41 a.m. on March 8, 2014, Malaysian Airlines Flight 370 took off from Kuala Lumpur on a flight to Beijing. Some 40 minutes later all contact with the Boeing 777 was lost. At that point the greatest and most disturbing mystery in the history of commercial aviation began to unfold. An airplane with 239 people on board did not disappear. Most airplane disasters are teachable moments that the aviation industry learns by. How Tony Kaye Got Kicked Out Of Hollywood After ‘American History X’ Getty Image Everything Tony Kaye does is brash. 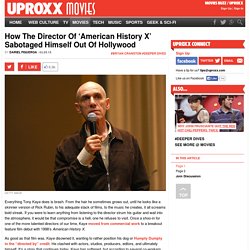 From the hair he sometimes grows out, until he looks like a skinnier version of Rick Rubin, to his adequate stack of films, to the music he creates, it all screams bold streak. If you were to learn anything from listening to the director strum his guitar and wail into the atmosphere, it would be that compromise is a hell, one he refuses to visit. Once a shoo-in for one of the more talented directors of our time, Kaye moved from commercial work to a breakout feature film debut with 1998’s American History X.

As good as that film was, Kaye disowned it, wanting to rather position his dog or Humpty Dumpty in the “directed by” credit. The trouble with Tony didn’t really begin on the set of American History X, it happened in the preceding months during post-production. “He’s a phenomenally talented guy,” Kaye said in a 1998 interview. My problem all through American History X was that I could never tell anyone what I wanted to do with the film. The Imposter: interview with the Chameleon. Frédéric Bourdin lives in a small town close to Le Mans in the Loire Valley, France. 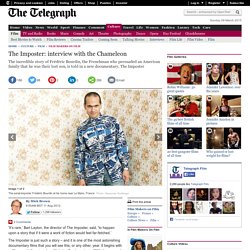 Le Mans does not have much of a literary history, and it is ironic that one of the few books in which the city plays a central role is Daphne du Maurier’s The Scapegoat. Written in 1957, this tells the story of John, a disillusioned lecturer who meets his double, a man named Jean de Gué, in a railway station bar in Le Mans, and changes places with him, suddenly finding himself with everything he has dreamt of: a new identity, a new nationality, a family – a place. 'You’re not the devil, by any chance?’ De Gué asks John. I took the train from Le Mans to the town where Bourdin lives. Charlie Parker Interview - Private Investigator Charlie Parker Interview The Imposter. 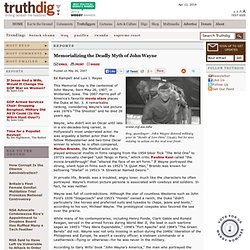 Reyes This Memorial Day is the centennial of John Wayne, born May 26, 1907, in Winterset, Iowa. The 2007 Harris poll of America’s favorite movie stars places the Duke at No. 3. Wayne, who didn’t win an Oscar until late in a six-decades-long career, is Hollywood’s most underrated actor. The Evil Dead. The Evil Dead is a 1981 American horror film written and directed by Sam Raimi and executive produced by Raimi and Bruce Campbell, who also stars alongside Ellen Sandweiss and Betsy Baker. The Evil Dead focuses on five college students vacationing in an isolated cabin in a remote wooded area.

After they find an audiotape that releases a legion of demons and spirits, members of the group suffer from demonic possession, leading to increasingly gory mayhem. 9 Traumatizing Moments from Classic Kids Movies. Image Source: and Photoshop. 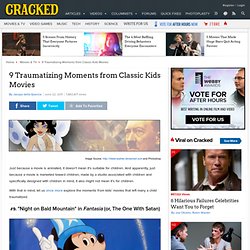 Just because a movie is animated, it doesn't mean it's suitable for children. And apparently, just because a movie is marketed toward children, made by a studio associated with children and specifically designed with children in mind, it also might not mean it's for children. With that in mind, let us once more explore the moments from kids' movies that left many a child traumatized. "Night on Bald Mountain" in Fantasia (or, The One With Satan) As the third Walt Disney film ever, Fantasia came out only two years after Snow White and right after Pinocchio.

5 Reasons The Greatest Movie Villain Ever is a 'Good' Witch. The Lighter Side of the Dark Side: 5 Villains Who Were Good. Being a movie villain is not easy. 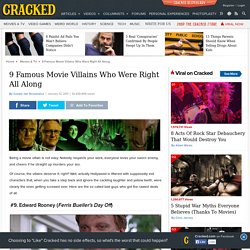 Nobody respects your work, everyone loves your sworn enemy, and cheers if he straight up murders your ass. 7 Insane Easter Eggs Hidden in Movies and TV Shows. We've already told you about some of the most mind-blowing Easter eggs hidden in music albums, classic works of art and video games, so it was just a matter of time before we explored our favorite Easter Eggs from the world of television and film. 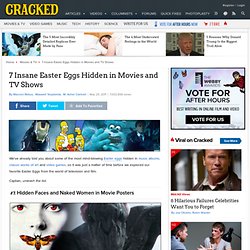 Captain, unleash the list. Hidden Faces and Naked Women in Movie Posters Most of us don't look twice at movie posters, short of muttering under our breath and saying, "Oh fuck, they're doing a sequel/remaking/rebooting that shit? "