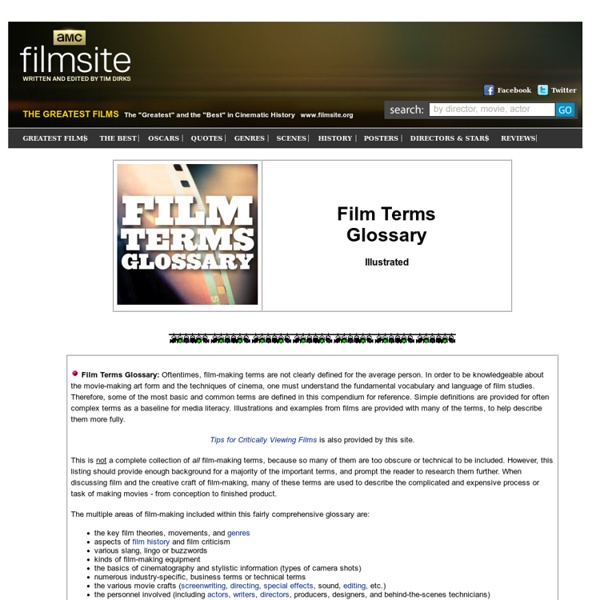 Film Terms Glossary: Oftentimes, film-making terms are not clearly defined for the average person. In order to be knowledgeable about the movie-making art form and the techniques of cinema, one must understand the fundamental vocabulary and language of film studies. Therefore, some of the most basic and common terms are defined in this compendium for reference. Simple definitions are provided for often complex terms as a baseline for media literacy. Illustrations and examples from films are provided with many of the terms, to help describe them more fully. Tips for Critically Viewing Films is also provided by this site. This is not a complete collection of all film-making terms, because so many of them are too obscure or technical to be included. The multiple areas of film-making included within this fairly comprehensive glossary are: Related:  Cinema • Writing

The Cinematography of 10 Great Filmmakers Captured in Cinemagraphs In recent years, graphic interchange format, once a throwback to the awkward early years of web design, has come into its own as an art form. Leading the way is the ever-popular cinemagraph, an enhancement on photography that typically adds subtle moving elements to the scene — wisps of blowing hair, blinking eyes, rising smoke, etc. Although cinemagraphs first gained popularity for their use in advertising, it seems only natural that the meme has taken hold of cinema as well, capturing memorable movie stills in infinite loops of movement. If We Don’t, Remember Me has been busy amassing quite the collection of these cinematic cinemagraphs, adding a new dimension to the way in which images can convey the aesthetic of a certain directorial style. Wes Anderson Moonrise Kingdom (2012) [via Tech Noir] The Royal Tenenbaums (2001) [via Demi Adejuyigbe]

Tips on Film Viewing Choose an Appropriate Film to View: Usually, watch a film that is worth your while. If you are in a film studies class, you will probably be studying some of the classics of cinema, rather than watching the latest popcorn film, action film or blockbuster. This exhaustive list of various steps is not intended for fluffy, entertaining films that are to be watched for pure enjoyment's sake. However, make sure to choose a film from any of the wide selection of genre films available so that you can experience the entire spectrum of different types of films. Know The Basics: Note the following basic facts (see some of these factors further below): film's title (and alternate titles or production titles, if any) year of release main stars/performers director studio rating running time genre classification brief summary tagline(s) awards Identify Studio: Know the studio responsible for the film. Why was the film made? Note Film's Rating: Was there any controversy surrounding the film's rating?

Subliminal themes of Hitchcock’s PSYCHO Subliminal themes of Hitchcock’s PSYCHO © by Rob Ager 2007 Watch / download the video version or scroll down for a slightly more detailed text version. Hitchcock used his powerful influence in the film industry to ensure that audiences could only enter screenings of Psycho at the very beginning of the film. Prior to this, audiences were free to pay their way into cinemas in the middle of a film, watch it from half way through and then catch the film over again from the start. Aside from changing the way cinemas functioned, this act also shows how carefully Hitchcock had constructed his shocker masterpiece. The central theme, as displayed by Norman Bates’ schizoid personality switching, is the concept of multiple identity or role play. Take Marion Crane for example. In Marion’s conflicting reality the role of her lover Sam is partially played out by Norman Bates. Marion’s anxieties about these issues are realized as Bates refuses to leave his mother. Mother: “No! Norman “The eh …”

FILM TERM GLOSSARY AERIAL SHOT: An exterior shot taken from a plane, crane, helicopter or any other very high position. Also referred to as a BIRD’S-EYE VIEW. See SHOT. ANIMATION: A form of filmmaking which consists of photographing individual drawings (cels) or inanimate objects (such as puppets or clay figures) FRAME by frame, with each frame differing slightly from the one before. When the images are projected at 24 frames per second, they appear to move (or are animated) ASPECT RATIO: The ratio of the projected image's width to its height. ASYNCHRONISM: A disparity between what is seen and what is heard. AVAILABLE LIGHTING: see LIGHTING. AXIS OF ACTION: In CONTINUITY EDITING, the imaginary line that passes from side to side through the main actors, defining the spatial relations of the scene. BIRD'S-EYE VIEW see AERIAL SHOT and SHOT. CRANE SHOT: A HIGH ANGLE, moving shot photographed from a crane (a mechanical arm which carries both camera and camera operators). CLOSE-UP: see SHOT. DEEP FOCUS: see FOCUS.

Verso Presents: J. Hoberman's Defining Films of the 21st Century | Watch It Is it possible to speak of a twenty-first century cinema barely a decade into the millennium? Acclaimed film critic J. Hoberman’s new book, Film After Film (Verso, 2012) is a timely and provocative collection of writings that chronicle how the advent of digital technology has led to the displacement of the medium of film—and the very relationship between movies and reality. In his book, Hoberman presents considerations of the defining movies of the twenty-first century, collected here. Join the Discussion - Add Your Comments

5 Of The Best Movie Scripts To Learn From In Each Genre 5 of the Best Movie Scripts to Learn From in Each Major Genre Professional film scripts are one of the best tools screenwriters have at their disposal. There is nothing else that gives you the practical experience of how it all comes together than reading a produced screenplay. But what are the best movie scripts to read, and why? In this post, we break down five of the best screenplays to read in each major genre—drama, comedy, action/adventure, thriller and horror. And why you need to read them. It’s by not only reading scripts, but really breaking them down, getting inside them and figuring out why they work, that you’ll get the most out of them as a screenwriter. Let’s dive on in and take a look at the top movie scripts in each genre you should read. One of the Best Drama Film Scripts You Should Read: American Beauty Alan Ball graduated from Florida State University with a degree in theater arts. There are some truly terrific examples of how to write a scene in this script.

ALFRED HITCHCOCK AND THE MAKING OF PSYCHO | TSY REQUIRED READING Hitchcock. Are you kidding me? Oh, hells yes. I will see this. Alfred Hitchcock’s classic thriller “Psycho” was covertly referred to as “Production 9401″ or “Wimpy” — the name Wimpy coming from cameraman, Rex Wimpy, who appeared on clapboards, production sheets, and studio stills. Alfred Hitchcock had a vacant cast chair marked “Mrs. Actress Janet Leigh and Director Alfred Hitchcock on the set of his chilling 1960 masterpiece, “Psycho”. A young Anthony Perkins as Norman Bates, the role that dogged him for the rest of his acting career. Scene from Alfred Hitchcock’s “Psycho,” based on the novel by Robert Bloch, shows Norman Bates (Anthony Perkins) by the Bates’ family home. — Image by © Underwood & Underwood/Corbis The Bates’ house in Alfred Hitchcock’s 1960 film “Psycho” was modeled after Edward Hopper’s 1925 oil painting “House by the Railroad” — shown above in black & white, and hung at the Museum of Modern Art in New York City.

VersoBooks.com Is it possible to speak of a twenty-first century cinema barely a decade into the millennium? Acclaimed film critic J. Hoberman’s new book, Film After Film, is a timely and provocative collection of writings that chronicle how the advent of digital technology has led to the displacement of the medium of film—and the very relationship between movies and reality. This sea change in filmmaking also spanned the 2000 American presidential election and the trauma of 9/11, events that reshaped world politics and left an indelible imprint on the emerging aesthetic of the new century’s cinema. In his book, Hoberman presents considerations of the defining movies of the twenty-first century. GoWatchIt—a new platform and social network that allows users to track where they can watch movies online and share their picks with other users—has assembled a channel where viewers can browse and watch Hoberman's 21 selections. View Hoberman's list below, or skip right to the channel to watch online: 1. 2. 3.

word choice - Difference between Yell / Shout / Scream / Cry with use cases - English Language Learners Stack Exchange So this question gives an answer to the difference between yell and scream, but I'd also like clarification about shout and cry, which have to be linked with the other two. Whatever the case when I use one of them I feel like I used the wrong one. Also, the top answer used "to cry" in the definition of "to scream" and "to shout" in the definition of "to yell". Most dictionaries also give other words as definitions, which doesn't help. I have a bunch of related question which I think makes sense to be asked and answer together. When I ask for difference about words, it's mostly for edge cases. Of course, I mean cry in other ways that "to shed tears". What's the word for when a metal vocalist "sings" very loudly in the mic ? To describe someone cursing really loud, what do you use ?

32 Film and Theatre Glossaries | Inbox Translation (London, UK) Screenwriting, directing, lightning, audio, stage performance and much more. If your interest lies in the fields of film and theatre, these glossaries are for you. Two categories and detailed descriptions – you will definitely find what you are looking for. Film IMDB – IMDB is probably one of the most reliable Internet sources of information when it comes to movies. In their glossary, you will be able to find a large number of words used in the movie industry, as well as useful cross-references. Matthew Sewell – A great glossary of film-related terminology which will provide you with adequate illustrations (from popular films) for each of the terms explained. Durham University – A glossary of film-related terminology, which focuses on words commonly used in direction and production. FilmSite – A carefully put together glossary of film terminology. Springhurst – This is a very basic glossary of film-related terms. Screenwriting – A glossary focusing especially on screenwriting terminology.