Welcome to the OFFICIAL SITE of WIM WENDERS 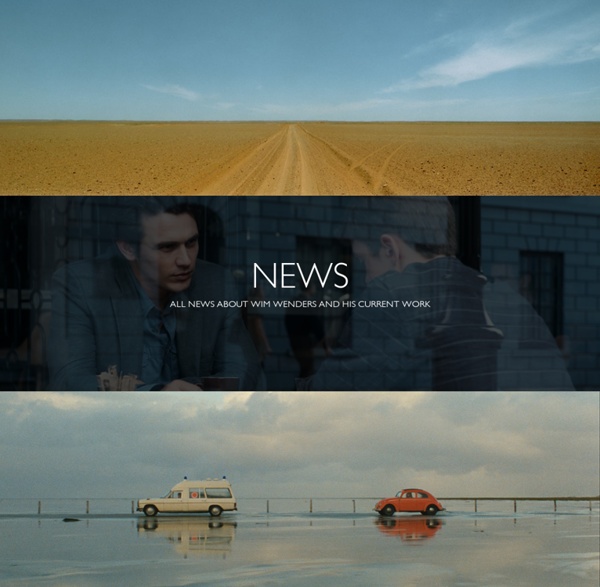 Wim Wenders and Australian philosopher Mary Zournazi discussed their new book Inventing Peace with Professor Jacqueline Rose at a sold-out venue at the ICA in London. Taking the form of a written dialogue, INVENTING PEACE presents an exploration of human perception and concepts of peace. Through various cinematic, literary and artistic examples, this identifies the need to reinvent a visual and moral language for peace, providing an alternative to the inhumanity of war and violence. Mary Zournazi is an Australian writer and philosopher. She teaches in the sociology program at the University of New South Wales, Sydney. She is the author of several books, including Hope - New Philosophies for Change (Routledge, 2003), and Keywords to War: Reviving Language in an Age of Terror (Scribe, 2007).

Aki Kaurismäki's Le Havre is like all his other work and thank goodness for that With Aki Kaurismäki's movies, as with Yasujirô Ozu's, familiarity breeds contentment. Taken cumulatively, they extol and embody the pleasures of repetition – the comforts of familiarity – without ever seeming repetitious or familiar themselves, even though Kaurismäki basically tells the same stories over and over again. Returning to the Finn's work after 20 years of not seeing it (he was poorly distributed here in the US for much of that time), my first impression was of an old, reliable and rewarding vibe-cum-sensibility still chugging along productively, the work perhaps wiser and kinder now, always evolving in tiny ways here and there, but always offering the same combination of deadpan fatalism (1988's Ariel has the funniest suicide in the history of cinema) amid a rigorously controlled mise-en-scène redolent of Poverty Row dressed by Douglas Sirk. Take Le Havre, his latest.

David Thomson On Films: The Stunted Adulthood Of Wes Anderson Moonrise Kingdom is set on an island, but its director Wes Anderson has always seemed like someone who insisted on a small off-shore existence. This is not uncommon in American movies, or necessarily forbidding: Josef von Sternberg lived on a glowing island where the light and its shadows fell on the face of a woman, ideally Marlene Dietrich, because Sternberg had loved her and been humiliated by her. Howard Hawks preferred to find an enclosed cockpit of intense talk and action—the airfield in Only Angels Have Wings or the court newsroom in His Girl Friday. The cattle drive in Red River seems set against epic American landscapes, with changing light and weather, but it’s really a camp that could wander on forever. Woody Allen haunts the streets and interiors of what looks like Manhattan, but he clutches his overcoat island of solipsism.

Věra Chytilová Early life and education[edit] Chytilová was born in Ostrava, Czechoslovakia on 2 February 1929.[5] She had a strict Catholic upbringing, which would later come to influence many of the moral questions presented in her films.[6] While attending college, Chytilová initially studied philosophy and architecture, but abandoned these fields. She then worked as a draftsman, fashion model and as a photo re-toucher before working as a clapper girl for the Barrandov Film Studios in Prague.[7] She then sought a recommendation from Barrandov Film Studios to study film production, but was denied. Undeterred by the rejection, she would later be accepted into the Film and TV School of the Academy of Performing Arts in Prague (FAMU) at the age of 28.[5][7] While attending FAMU she studied underneath renowned film director Otakar Vavra, graduating in 1962.[7]

A Personal Reflection on the Work of Abel Ferrara in Light of His New Picture (Written in the Shadow of Serge Daney) on Notebook I used to believe, like Wenders or Godard, in the death of cinema. I accepted it as fact but never believed in it. The movies, that’s what I believed in—a dark room, shadows on a surface, a bunch of lonely people sitting down, looking up. Like Leos Carax to Serge Daney, Abel Ferrara showed me there’d be cinema ‘til the end of the world. At first I thought Abel Ferrara’s films were badly acted; I soon realized Ferrara would take bad acting with truth in it over a masterpiece of falsehoods. The ultimate female innovators in film Věra Chytilová was one of the most vibrantly playful, radically subversive female filmmakers cinema has seen. In tribute to the Czech New Wave director, who died in March, we're screening her '60s masterpiece Daisies – about two girls who embark on a trail of mayhem after deciding the world's gone bad – on Sunday with Hackney Picturehouse and the Czech Centre London (ticket details below). With Chytilová gone, it's far from all bad news. The screening also celebrates the spirit of our new Females First strand on Dazed Digital, a showcase for female filmmaking talent that launches this week.

rogerebert.com I have heard theories that Federico Fellini's "La Dolce Vita" catalogs the seven deadly sins, takes place on the seven hills of Rome, and involves seven nights and seven dawns, but I have never looked into them, because that would reduce the movie to a crossword puzzle. I prefer it as an allegory, a cautionary tale of a man without a center. Fellini shot the movie in 1959 on the Via Veneto, the Roman street of nightclubs, sidewalk cafes and the parade of the night. His hero is a gossip columnist, Marcello, who chronicles "the sweet life" of fading aristocrats, second-rate movie stars, aging playboys and women of commerce. The role was played by Marcello Mastroianni, and now that his life has ended we can see that it was his most representative. The two Marcellos -- character and actor -- flowed together into a handsome, weary, desperate man, who dreams of someday doing something good, but is trapped in a life of empty nights and lonely dawns.