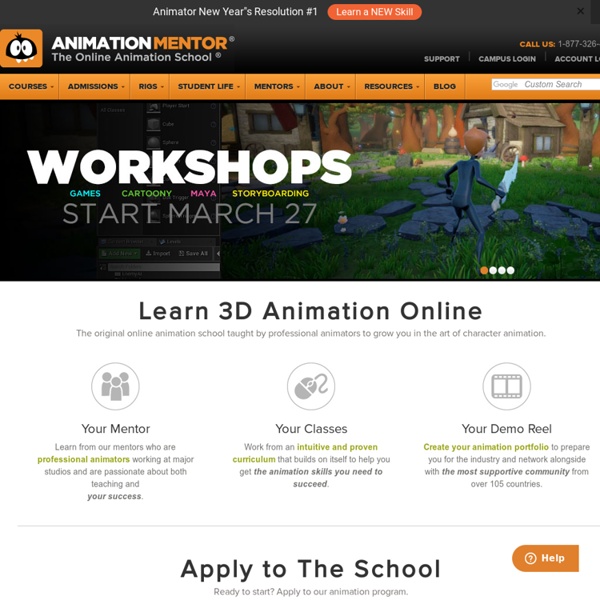 Animation industry likely to hit $1 bn by 2012 PTI Oct 17, 2010, 04.30pm IST MUMBAI: The Indian animation market, estimated at USD 494 million in 2008, will likely grow at compounded annual growth rate of 22 per cent till 2012, an industry official has said. "Globally, the animation industry is poised to touch USD 100 billion by 2012 and India's animation industry is expected to hit USD 1 billion by 2012, aided by increased outsourcing and a growing domestic market," Maya Academy of Advanced Cinematics ( MAAC) Business head, Ram Kumar Worrier said here. Maya Academy of Advanced Cinematics (MAAC) is the leader in high-end 3D Animation & VFX education in India and is engaged in the making of most awaited 3D animation film "Ramayana ? "Animation in India is on the right track. Indian companies have also been helped by the increase in production budgets for animation movies worldwide.

World's Computer Graphics Community Character Animation | School of Film/Video BFA Only The Program in Character Animation is designed for students who seek an understanding of the art of character performance and storytelling in animation. It provides comprehensive artistic and technical training to help each student develop as a fully-fledged animation artist within both the traditional and computer-generated (CG) animation environments. To best instruct, guide and mentor students, the program features a faculty of experienced professionals who work at the forefront of traditional, CG and independent animation. The first year of the program’s intensive four-year curriculum is devoted to courses in life drawing, color and design, storytelling and character animation—both traditional and CG. In addition to its course requirements, the program calls on students to attend lectures, demonstrations and screenings as part of an extensive visiting artist series, which features noted animators, filmmakers, actors and comedians. Character Animation Student Films

11 Second Club - The Monthly Character Animation Competition Indie Fund PLEMENTARY ASSETS IN ANIMATION ENTERPRISES:THE MAKING OF ANIMATION INDUSTRY CLUSTER IN SHENZHEN--《Economic Geography》2008年01期 WANG Ji-ci,MEI Li-xia,XIE Kun-ze (College of Urban and Environmental Studies,Peking University,Beijing 100871,China) Animation industry makes high profit in developed economies,while in China it's the opposite.With the concept of complementary assets,this paper explains the business models and the characteristics of Hollywood and Akihabara's animation industries,and illustrates the failure of Thru the Moebius Strip,the product created in 2001 in Shenzhen and the success of Shenzhen National Cartoon and Animation Industry Base setting up in 2006.The paper analyzes the problems of Shenzhen animation industry,and finds out that lack of complementary assets is one of the primary factors puzzling Chinese animation industry development. The paper concludes that to shape local complementary assets include internal and external ones is a possible way to upgrade local animation industry of China.

North Dallas High School mural contest recalls famous grad, animator Tex Avery | Dallas-Fort Worth Education News Tex Avery's cartoons were funny 70 years ago, and they're still funny today. Avery created the wise-cracking Bugs Bunny and awarded him the signature, "Eh, what's up, doc?" He first heard the line at North Dallas High, where he graduated with the Class of 1926. Standing in the cavernous hallways, one can almost hear Roaring '20s teenagers passing one another during class changes. "Hiya, doc." Avery, who died of lung cancer in 1980, once told an interviewer that Daffy Duck was born on White Rock Lake in East Dallas, where he and his friends hunted ducks. Who knew? Avery's animated films - that's what academics call cartoons - are enjoying a renaissance at his alma mater this month. "I grew up watching them on Cartoon Network," said Jesus Martinez, one of the student muralists. "I like the ones with Foghorn Leghorn and Droopy," said Noland Sowels, a 17-year-old senior. Even though Avery created his best cartoons in the 1930s and '40s, they still appeal to young people today. Enduring images

Open Season Diary: Animating the Animals | AWN From the AWN/VFXWorld Exclusive Open Season Diaries. Imageworks animators were given the ability to refine poses and sculpt the silhouettes with special shapers, which were built into the surface of a character. All images © Sony Pictures Ent. Directors Jill Culton, Roger Allers and Anthony Stacchi knew they would have to push the boundaries of animation in order to get desired performances they envisioned for Boog, Elliot and the entire cast of creatures that inhabit the town and forest of Timberline. Fortunately for them, the Open Season animation team rose to challenges, lead by animation supervisors Renato Dos Anjos, Chris Hurtt, Sean Mullen and Todd Wilderman. The animation needed to match the graphic style of Eyvind Earles world and the preferences of the directors who wanted snappy, cartoony, squash-and-stretch, old-style animation. A fundamental, driving aspect of the look of traditional 2D films is the appeal of the drawings created by animators through various artistic cheats.