The Laughter Memoirs. Remembering Hasrat Jaipuri through his daughter's poem - TheSongPedia. Hindi cinema is overloaded with song for every moment. 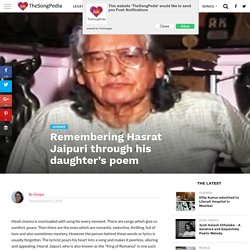 There are songs which give us comfort, peace. Then there are the ones which are romantic, seductive, thrilling, full of love and also sometimes mystery. However the person behind these words or lyrics is usually forgotten. The lyricist pours his heart into a song and makes it peerless, alluring and appealing. Hasrat Jaipuri, who is also known as the “King of Romance” is one such lyricist. Born on 15th April, 1922 in Jaipur, as Iqbal Hussain, he studied till tenth standard and then acquired education in Urdu and Persian from his learned grandfather, Fida Hussain. His daughter Kishwari Jaipuri, pays tribute to him on his birthday through a short poem. My Heartfelt Tributes in a Poem written by Me …Dad’s Laadli beti who misses her Dad Every Moment ……Dad Tum Sab Ko Chhod Kar Aa Jaao …. 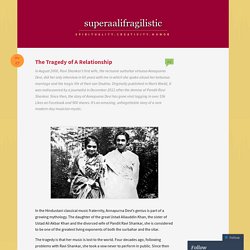 Originally published in Man’s World, it was rediscovered by a journalist in December 2012 after the demise of Pandit Ravi Shankar. Since then, the story of Annapurna Devi has gone viral logging in over 10k Likes on Facebook and 900 shares. It’s an amazing, unforgettable story of a rare modern-day musician mystic. In the Hindustani classical music fraternity, Annapurna Devi’s genius is part of a growing mythology.

The daughter of the great Ustad Allauddin Khan, the sister of Ustad Ali Akbar Khan and the divorced wife of Pandit Ravi Shankar, she is considered to be one of the greatest living exponents of both the surbahar and the sitar. The tragedy is that her music is lost to the world. Annapurna Devi’s aloofness from the world extends to not even taking phone calls. HindiGeetMala.net : Lyrics of Hindi Film Songs. Legends. 100 Years of Indian Cinema: The first women directors. New Delhi: The Indian film industry has seen the emergence of some critically and commercially appreciated female directors in last some years but the film business more or less remains dominated by their male counterparts. 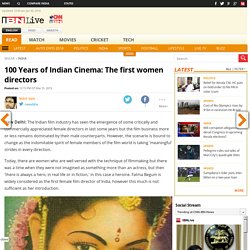 However, the scenario is bound to change as the indomitable spirit of female members of the film world is taking 'meaningful' strides in every direction. Today, there are women who are well versed with the technique of filmmaking but there was a time when they were not imagined as something more than an actress, but then 'there is always a hero, in real life or in fiction,' in this case a heroine. Fatma Begum is widely considered as the first female film director of India, however this much is not sufficient as her introduction. Fatma Begum is considered as the first woman director of Indian Cinema. She directed her first film in 1926. Born in an Urdu speaking family, Fatma Begum was related to Nawab Sidi Ibrahim Muhammad Yakut Khan III. Philip'sfil-ums. Devdas: Sadomasochism and Colonialism. I want to help the Black man to free himself of the arsenal of complexes that has been developed by the colonial environment. 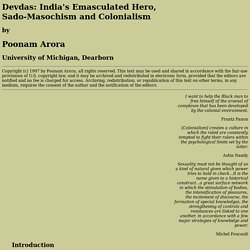 Frantz Fanon [Colonialism] creates a culture in which the ruled are constantly tempted to fight their rulers within the psychological limits set by the latter. Ashis Nandy Sexuality must not be thought of as a kind of natural given which power tries to hold in check...It is the name given to a historical construct...a great surface network in which the stimulation of bodies, the intensification of pleasures, the incitement of discourse, the formation of special knowledges, the strengthening of controls and resistances are linked to one another, in accordance with a few major strategies of knowledge and power. Michel Foucault Introduction One of the most enduring icons of the Indian film oeuvre is the aristocratic, lovelorn, sexually impotent, politically disengaged, and ultimately tragic hero named Devdas.