Editorial: What Did Marvel Disassemble to Make THE AVENGERS? There’s never quite been a movie constructed like The Avengers. 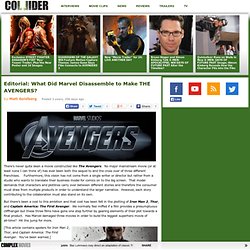 No major mainstream movie (or at least none I can think of) has ever been both the sequel to and the cross over of three different franchises. Furthermore, this vision has not come from a single writer or director but rather from a studio who wants to translate their business model for comics on to the big screen. That model demands that characters and plotlines carry over between different stories and therefore the consumer must draw from multiple products in order to understand the larger narrative.

However, each story contributing to the collaboration must also stand on its own. But there’s been a cost to this ambition and that cost has been felt in the plotting of Iron Man 2, Thor, and Captain America: The First Avenger. [This article contains spoilers for Iron Man 2, Thor, and Captain America: The First Avenger. Thor makes S.H.I.E.L.D. a much larger element of its plot but even that feels like somewhat of a detour. Pixar Is Not Planning To Make A Movie Based On Marvel Characters. After months of misguided, fanatical and baseless wishing from shortsighted idealists, Pixar headman John Lasseter has finally and unequivocally shot down the notion that the beloved animation company will produce a film based on Marvel superheroes. 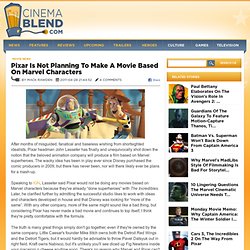 The wacky idea has been in play ever since Disney purchased the comic producers in 2009, but there has never been, nor will there likely ever be plans for a mash-up. Speaking to IGN, Lasseter said Pixar would not be doing any movies based on Marvel characters because they've already “done superheroes” with The Incredibles. Later, he clarified further by admitting the successful studio likes to work with ideas and characters developed in house and that Disney was looking for “more of the same”. With any other company, more of the same might sound like a bad thing, but considering Pixar has never made a bad movie and continues to top itself, I think they're pretty comfortable with the formula.

Marvel Studios head talks various 'Avengers' spin-offs. Would you want to see minor characters in their own movies? QUESADA Talks CAP, THOR & AVENGERS MOVIES. EDITORIAL: Why the Marvel Cinematic Universe is Kicking the Bejesus out of DC's Cinematic Universe! Here's the thing I want to mention first. 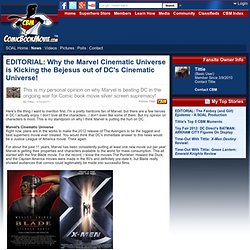 I'm a pretty hardcore fan of Marvel, but there are a few heroes in DC I actually enjoy. I don't love all the characters...I don't even like some of them. But my opinion on characters is moot. This is my standpoint on why I think Marvel is putting the hurt on DC. Marvel's Cinematic Universe Right now, plans are in the works to make the 2012 release of The Avengers to be the biggest and best superhero movie ever created. For about the past 11 years, Marvel has been consistently putting at least one new movie out per year. Blade was released in 1998 and it spawned two eventual sequels in 2002 and 2004. 2002 also put the superhero movie into high gear with the HUGE success of Spider-Man, a movie that again preceded 2 sequels, one in 2004, the second in 2007, and a reboot set for release in the next year or so. 2004 saw the reboot of The Punisher, the sequel Spider-Man 2, and the threequel Blade: Trinity.

Say what you want about Marvel. Focker=Out! Is Marvel Killing The Comic Book Movie Genre? For the past 10 years, Marvel has been putting out CBM after CBM after CBM. 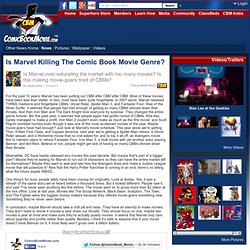 Most of these movies have been less than stellar. In fact, most have been quite forgettable. In 2007 alone, Marvel released THREE mediocre and forgettable CBMs: Ghost Rider, Spider-Man 3, and Fantastic Four: Rise of the Silver Surfer. It seemed that people had had enough of getting so many CBMs shoved down their throats. And then Iron Man and The Dark Knight took everyone by surprise. Meanwhile, DC have barely released any movies this past decade. One thing's for sure, people lately have been craving for originality.

In conclusion, maybe Marvel should take a chill pill and relax.