The Simpsons: Interactive Map of Springfield 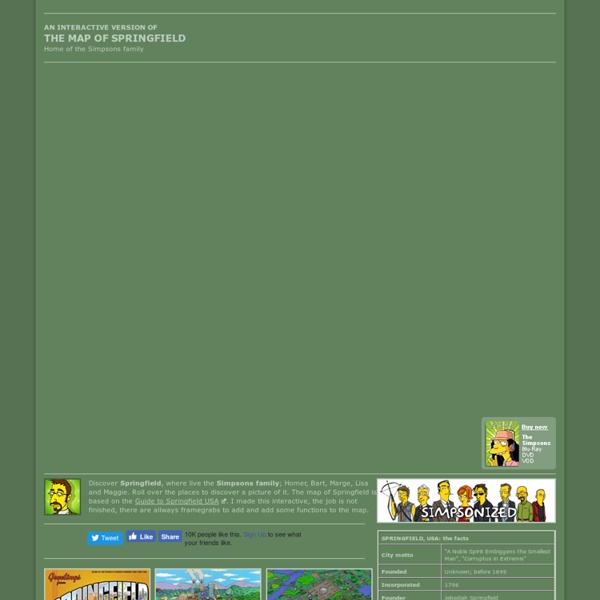 Discover Springfield, where live the Simpsons family; Homer, Bart, Marge, Lisa and Maggie. Roll over the places to discover a picture of it. The map of Springfield is based on the Guide to Springfield USA . I made this interactive, the job is not finished, there are allways framegrabs to add and add some functions to the map. If you want to know more about the show or Springfield in particular, check out these links: » Zoom-out opening sequence (animated gif) (in GABF05 & FABF08) » Where is The Simpsons' Springfield? » Official site of "The Simpsons" animated series on FOX » All Intros (Runs To Couch) of the 16th/17th Season (including zoom-out couch to space) » All the Simpsons on DVD via Amazon.com » The screencaps » Everything about The Simpsons Movie Source: Wikipedia Like The Map of Springfield?

Thule In classical and medieval literature, ultima Thule (Latin "farthermost Thule") acquired a metaphorical meaning of any distant place located beyond the "borders of the known world".[5] By the Late Middle Ages and early modern period, the Greco-Roman Thule was often identified with the real Iceland or Greenland. Sometimes Ultima Thule was a Latin name for Greenland, when Thule was used for Iceland.[6] By the late 19th century, however, Thule was frequently identified with Norway.[7][8]

See The 25 Most Beautiful Data Visualizations Of 2013 It's an understatement to say that the data visualization sphere has exploded over the past several years. As we look to understand the increasing, mind-bending amount of information that we all generate across all areas of endeavor, data artists have created works that have brought beauty and clarity to everything from the minutiae of our personal lives to geopolitical trends. And, of course, as more data is visualized in more ways, we've experienced the fatigue that comes with gratuitous, ham-handed assemblies of facts and figures.

Hyperborea Area north of Thrace in Greek mythology In Greek mythology the Hyperboreans (Ancient Greek: Ὑπερβόρε(ι)οι, pronounced [hyperbóre(ː)ɔi̯]; Latin: Hyperborei) were a race of giants who lived "beyond the North Wind". The Greeks thought that Boreas, the god of the North Wind (one of the Anemoi, or "Winds") lived in Thrace, and therefore Hyperborea indicates that it is a region beyond Thrace. This land was supposed to be perfect, with the sun shining twenty-four hours a day, which to modern ears suggests a possible location within the Arctic Circle during the midnight sun-time of year. Celebrating The 83rd Oscar Awards With 83 Amazing Infographics This year’s edition of the Oscars has passed, but we thought that it would be nice if we selected some of the most interesting infographics about the wonderful world of cinema. And that’s a huge task, especially if we consider that some sagas – like Star Wars or Harry Potter – have so many infographics about them, that we could make an entire post just with them – just for you to have an idea, we have over 400 on Visual Loop!!!. Even so, we selected some from all over the world, so we hope you enjoy it!

Medieval Fantasy City Generator by watabou This application generates a random medieval city layout of a requested size. The generation method is rather arbitrary, the goal is to produce a nice looking map, not an accurate model of a city. All the actions and options are accessible via the context menu. Polygon Map Generation demo The simplest way to explore the maps is to click Random repeatedly. Try the various Island Shape, Point Selection, and View options. Feel free to use these maps for any purpose, including commercial use. This is a map generator I wrote in 2010 for a game[4]; I’m not working on it anymore, but all the code is available so that you can download and modify it for your own needs. I also have an HTML5 version of mapgen2[5] that has slightly different features. In a shape number like 85882-8, 85882 chooses the overall island shape and 8 is the random number seed for the details (random points, noisy edges, rivers).