How to Create a Cupcake in Cinema 4D. How To Use Dynamics, Particle Emitters, and Different Camera Angles in Cinema 4D. In this tutorial, I show you how to make this fun eyeball animation shown below. 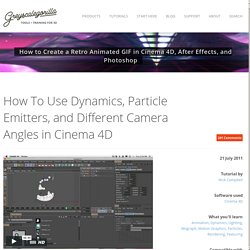 First, we will build the dynamics system using Cinema 4D’s dynamics system and particle emitters. Then I show you how to texture the spheres to look like an eyeball using procedural materials. Finally, I show you how to light the scene and set up multiple camera angles to render out for compositing. I use Cinema’s new Batch Render feature to render all the camera angles at once. Stay tuned for part two of this tutorial where we will composite the scene using Adobe After Effects. UPDATE: Many of you have mentioned using the Stage Object to cut between cameras instead of rendering out different angles separately. UPDATE 2: The rigid body tag has now moved in new version of Cinema 4D. you can find it at tags > simulation tags > rigid body. Example Based on Adobe Eyeballs by by Seagulls Fly Watch Part 2. Broken Apart Movie Title with Cinema 4D and Transform. Object Tearing Itself Free From Cloth. Model, Texture, And Light A Jellyfish Scene In Cinema 4D. 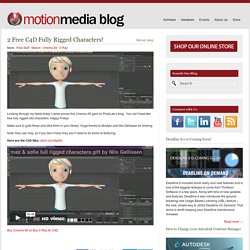 Deadline 8 includes some really cool new features and is one of the biggest releases to come from Thinkbox Software in a few years. Along with tons of new updates and features, Deadline 8 also introduces the ground-breaking new Usage Based Licensing (UBL) feature – the new, simple way to utilize Deadline On Demand. That alone is worth keeping your Deadline maintenance renewed. Read more → How to Change your Autodesk Contract Manager We get asked a lot about how to change your Autodesk contract manager so I thought that I would post a short how-to. Read more → Boris Continuum Complete (BCC) 10 Free Updated The new release of Boris Continuum Complete, BCC 10.0.1 is available free to all BCC 10 for Adobe users. Read more → Fume FX 4.0 for Maya Now Available! Read more → V-Ray 3.3 for Maya Released! Haos Group V-Ray 3.3 for Maya has been released! C4d - Create Body Character. Cinema 4D Tutorial - How to use Motion Drop (Free Cinema 4D Plugin) Tutorial Cinema 4D - Intro con texto de esferas.

Demo - X-Particles. Register below for your Free 30 Day Demo of X-Particles 3.5, you will then be e-mailed a download link and serial number. 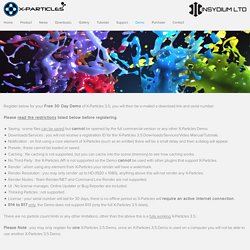 Model A Microphone With A Wire Mesh Texture in Cinema 4D. After Effects & Maxon Cinema 4D tutorial: Create stunning 3D graphics. 8 best Cinema 4D tutorials. Achieving 2D Cel Shading in Cinema 4D Without Sketch & Toon. In this tutorial I’m going to show you how you can use native tools inside of ANY Cinema 4D version (this includes even LITE!) 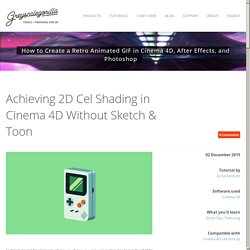 To achieve 2D cel shading. What does this mean? Well this means that paired with my previous tutorial about how you can create Line Art without Sketch & Toon, you can now create something similar to the results that you can get by using S&T. Exciting stuff, huh? If you’re not familiar with cel shading and how the Sketch & Toon Cel Shader works, be sure to check out my Cel Shading tutorial here. If you have any questions, post them in the comments! If you want to have access to the Game Boy model I use in this tutorial, it’s included in the latest Sketch & Toon Model Pack that you can purchase here. This was recorded live on the Live Design Stream. Tutorial: Visit eyedesyn.com for more from EJ. CINEMA 4D Free Tutorials training. Metaball Object in Cinema 4D - Greyscalegorilla Blog. 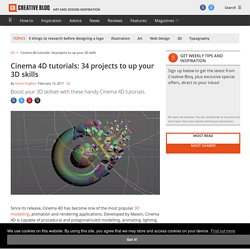 Developed by Maxon, Cinema 4D is capable of procedural and polygonal/subd modelling, animating, lighting, texturing, rendering, and common features found in 3D modelling applications. These Cinema 4D tutorials will help you to master the basics of 3D art, and put you well on your way to becoming an expert. Nail the basics Introduction to Cinema 4D The brilliant team at Greyscalegorilla have made over 200 hundred tutorials in the last four years, some of which are intro videos that go over the basics of Cinema 4D.