Create Convincing Looking Clouds using Pyrocluster in Cinema 4D. Twice a month we revisit some of our reader’s favorite posts from throughout the history of Cgtuts+. 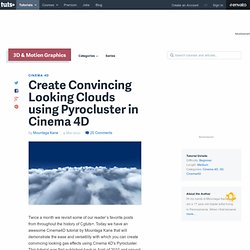 Today we have an awesome Cinema4D tutorial by Mountaga Kane that will demonstrate the ease and versatility with which you can create convincing looking gas effects using Cinema 4D's Pyrocluster. This tutorial was first published back in April of 2010 and proved to be incredibly popular with our C4D users! Let’s take a look back… Additional Files/ Plugins:Download the Project Files for this tutorial. Greyscalegorilla/blog. How to Make A Hydraulic Arm In Cinema 4D Part 1. How to Animate and Control Lights and Dynamics with Xpresso In Cinema 4D Part 1. Tattered Cloth In Cinema4D – Day 1. Hello, Tony Rivera here. 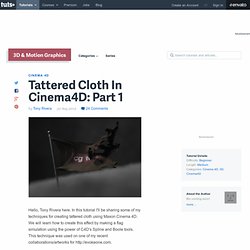 In this tutorial I'll be sharing some of my techniques for creating tattered cloth using Maxon Cinema 4D. We will learn how to create this effect by making a flag simulation using the power of C4D's Spline and Boole tools. This technique was used on one of my recent collaborations/artworks for Republished Tutorial Every few weeks, we revisit some of our reader's favorite posts from throughout the history of the site. Note* Yes, there already is a torn cloth tutorial for 3DSMax, but the techniques are much different between programs. How to Animate a Page Turn with Cinema 4D and Planesmart with Mike the Monkey. I’m so excited to have Mike “The Monkey” Senften back for another tutorial on Greyscalegorilla. 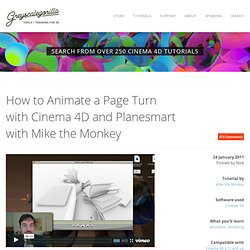 In this video, Mike shows you how to set up a page turn animation in Cinema 4D using several different techniques including cloth and the bend deformer. Then, he shows you how to texture each page with a unique texture using the excellent Planesmart Plugin by Rick Barrett and Cineversity. Get Planesmart and a 30 day trial for Cineversity for only $30 Due to the overwhelming demand for PlaneSmart, MAXON USA is offering 30 days for $30 access to Cineversity, for those who want to get their hands on PlaneSmart, but don’t want to shell out the initiation fee or $295. At the end of your trial period, you are welcome to continue with your Cineversity membership for the regular $95 annual renewal fee. MAXON USA is currently working on a complete rebuild of the Cineversity web site. This offer and the coupon expires March 1, 2011 To use this Coupon Go to the Maxon Shop Enter your information. 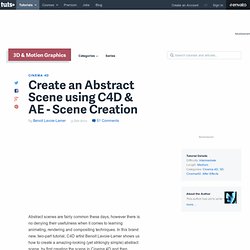 In this brand new, two-part tutorial, C4D artist Benoit Lavoie-Lamer shows us how to create a amazing-looking (yet strikingly simple) abstract scene, by first creating the scene in Cinema 4D and then heading into After effects for the final compositing. Enjoy! Part 1: The scene Step 1 Let's start by creating the scene and the animation, after this part, we'll move on to the studio creation! Step 2 Now, let's change our sphere into a metaball shall we! Step 3 One of the thing we need to fix before we continue, is too change the Hull Value to 350 %. Step 4 Now we'll start creating what makes the metaball move. Learn How to Control MoSplines in Cinema4D. In today's tutorial, Dogocan Bilgili walks us through how to take advantage of the MoSpline module in Cinema4D to add animated curves to your projects. 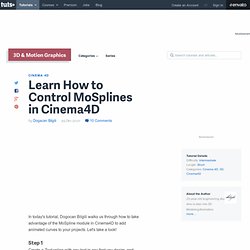 Let's take a look! Step 1 Create a Text spline with any text in any font you desire, and then make it editable (using the C shortcut key). Roundup: Cinema 4D tutorials « From up North. Time to introduce a new section of the blog where we collect and present awesome resources from all over the web. 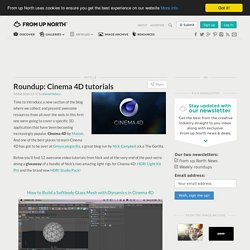 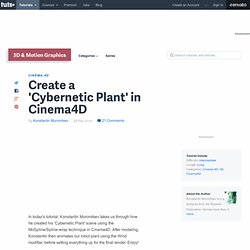 After modeling, Konstantin then animates our robot plant using the Wind modifier, before setting everything up for the final render. Enjoy! To create this scene we will be using MoSpline, Spline Wrap and Cloner Objects from Mograph module, along with the Wind particle modifier. This tutorial will also show you how to create simple but effective materials using the Danel Shader (my favorite shader in C4D) and give you some tips about creating animation with and without keyframes.

Let's get started! Additional Files/ Plugins:Download the Project Files for this tutorial Step 1 To create the main stem object, we'll be using MoSpline and Spline Wrap. Step 2 Select alternating height segments, starting from the second one from the bottom, using Loop Selection (U~L). Step 3. What Is Linear Workflow and How Can It Help Your Renders Look Better? I wanted to start a conversation about Linear Workflow. 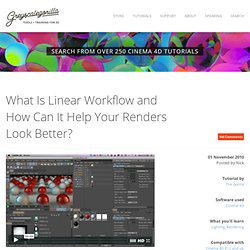 It’s a topic that leaves a lot of people (including me) confused and asking a lot of questions. Why now? Well, with Cinema 4D version 12, linear workflow is turned on by default.