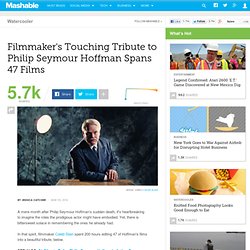 Yet, there is bittersweet solace in remembering the ones he already had. In that spirit, filmmaker Caleb Slain spent 200 hours editing 47 of Hoffman's films into a beautiful tribute, below. The video spans from Hoffman's early days, with his start guest starring on shows like Law & Order, to his virtuosic lead roles in films like Capote and Doubt, making clear the magnitude of his talent. Slain writes, "I can assure you that after 22 years on screen and nearly fifty films, we now look at the work of an actor who never had a single dishonest moment on camera.

" BONUS: 10 Actors Who Appeared on Screen After Their Deaths Have something to add to this story? The Best Indie Movies of 2013. Gabe Ibáñez : Sa filmographie (films et séries) Specialty Box Office: Nick Cave's '20,000 Days' Has Best. By Peter Knegt | Indiewire September 21, 2014 at 1:56PM Our weekend box office report. 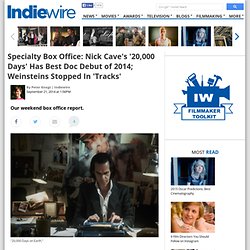 "20,000 Days on Earth. " A whopping 10 new films entered the specialty marketplace in limited release this weekend, and that's not even counting the semi-wide release of Kevin Smith's "Tusk" (which notably despite very strong buzz out of Toronto, had a so-so debut). So which films managed to stand out in the crowd? And which holdovers continued on their way to breakout status? The good news:

The Best Indie Movies of 2014 So Far (Updated) The two newest additions to our running tally of the year's highest-rated films: a potential masterwork from one of Taiwan's most highly regarded filmmakers and a heartwarming festival favorite starring two of comedy's biggest names. 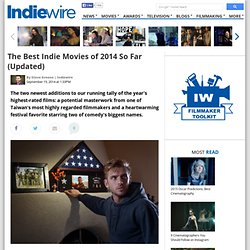 Throughout 2014, members of Indiewire's Criticwire Network -- comprised of nearly 500 critics from around the world -- have been adding their grades and reviews to our database of film pages. Below is a collection of those films released in theaters during that time that have a) received 15 or more reviews and b) maintained a grade average of "B+" or higher. We'll update this list as new additions surface and as fresh waves of feedback arrive. Averages and totals are subject to change (grade totals listed in italics below have changed since the last update), but for now, these are the titles that many members of the Criticwire Network suggest you should watch.For more insight into conversations from the critical landscape, turn to our Criticwire blog. 1. 2. La Semilla Inmortal, J.Balló / X.Pérez. Posted by: pcastrillo La Semilla Inmortal, un libro de poco más de 300 páginas que lo contiene todo (en cuanto a argumentos narrativos), o al menos eso pretende. 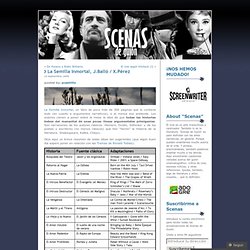 La Semilla Inmortal, J.Balló / X.Pérez. Best TV Shows of the 2013-14 Season. Best comedies Awards Below are the shows that have been nominated for ( ) or have won ( ) awards for best overall comedy this season. 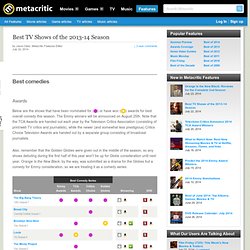 The Emmy winners will be announced on August 25th. Also, remember that the Golden Globes were given out in the middle of the season, so any shows debuting during the first half of this year won't be up for Globe consideration until next year. The 15 Best Non-Hollywood Animated Films Of The 2000s. These films of the 2000s have left a mark for generations to come, and while being animated, most of them are not for younger audiences. 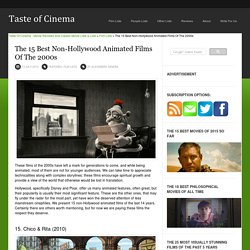 We can take time to appreciate technicalities along with complex storylines: these films encourage spiritual growth and provide a view of the world that otherwise would be lost in translation. Hollywood, specifically Disney and Pixar, offer us many animated features, often great, but their popularity is usually their most significant feature. These are the other ones, that may fly under the radar for the most part, yet have won the deserved attention of less mainstream cinephiles. We present 15 non-Hollywood animated films of the last 14 years. Certainly there are others worth mentioning, but for now we are paying these films the respect they deserve. 15. Set in the late 1940s and early 1950s, this animated feature is not aimed at kids. 14.