Clay Shirky: How the Internet will (one day) transform government 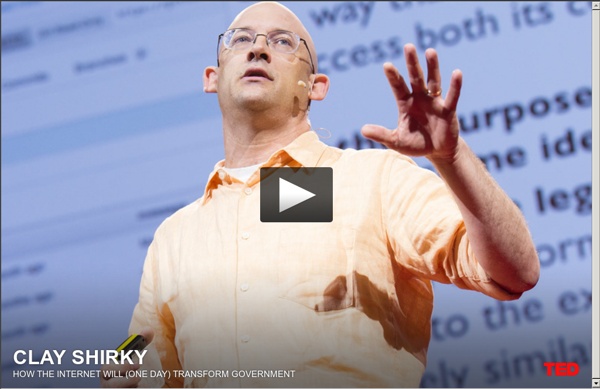 Better Than Free [Translations: Belarusian, Chinese, French, German, Italian, Japanese, Polish, Portuguese, Russian, Spanish, Turkish] The internet is a copy machine. At its most foundational level, it copies every action, every character, every thought we make while we ride upon it. In order to send a message from one corner of the internet to another, the protocols of communication demand that the whole message be copied along the way several times. IT companies make a lot of money selling equipment that facilitates this ceaseless copying.

Alice Goffman: How we're priming some kids for college — and others for prison Close Help with subtitles Desktop / laptop users: please make sure you have the most updated versions of your browser and Flash player, and that Flash is enabled when you visit TED.com. iOS users: to access subtitles, start playing the video, then tap the speech bubble icon that appears in the bottom row of video controls. Android users: although Android devices do not support subtitles, you can download the TED app from the Google Play store. Direct Democracy, 2.0 Angelika Warmuth/DPA, via Agence France-Presse — Getty Images Members of the Pirate Party attended a conference in Neumünster, Germany, last month. I FIRST took real notice of the Pirates last summer during the campaign for city elections in Berlin. German electioneering is quaint, even faintly musty by American standards.

The Printer That Can Print A 2,500 Square Foot House In 20 Hours. We have seen huge advancements in 3D printing. We’ve even seen oversized wrenches printed that measure 1.2 meters in length. Now, we can print an entire 2,500 sqft house in 20 hours. In the TED Talk video below, Behrokh Khoshnevis, a professor of Industrial & Systems Engineering at the University of Southern California (USC), demonstrates automated construction, using 3D printers to build an entire house in 20 hours. In manufacturing we use a process called CAD/CAM (computer-aided design / computer-aided manufacturing). 3D models are designed on a computer and then manufactured using CNC Machines or 3D printers. The design is manufactured into a physical object automatically, with instruction from 3D computer model to physical object without human interface.

The Internet is not a Surveillance State… In his March 16, 2013 opinion column on CNN.com, Bruce Schneier called the Internet a “surveillance state”. In the piece, Schneier complains that the Internet now serves as a platform which enables massive and pervasive surveillance by the State. State sponsored and ordained surveillance, however, is not synonymous with the Internet. Schneier’s use of the word ‘state’ is ill-advised, his goading conclusion thereby misses the mark.

Nanoscribe Will Sell a Micro 3-D Printer That Creates Tiny Structures in Seconds Nanoscribe, a spin-off from the Karlsruhe Institute of Technology in Germany, has developed a tabletop 3-D microprinter that can create complicated microstructures 100 times faster than is possible today. “If something took one hour to make, it now takes less than one minute,” says Michael Thiel, chief scientific officer at Nanoscribe. While 3-D printing of toys, iPhone covers, and jewelry continues to grab headlines (see “The Difference Between Makers and Manufacturers”), much of 3-D printing’s impact could be at a much smaller scale. Micrometer-scale printing has shown promise for making medical and electronic devices. Thiel says it should be possible to speed up his company’s microprinting technique even more in the future. Nanoscribe plans to start selling its machine in the second half of this year.

About us - Public-i We pioneered webcasting in the public sector over a decade ago. At that time the concept of opening up the council chamber to public viewership was met with significant concern, and we began working with some forward-thinking clients who wanted to challenge the status quo and experiment with how technology could help the ways in which they interact with the public. Times have changed. Full Episodes on History Season five begins with Ivar the Boneless asserting his leadership over the Great Heathen Army, while Lagertha reigns as Queen of Kattegat. Ivar’s murder of his brother Sigurd sets the stage for vicious battles to come as Ragnar’s sons plot their next moves after avenging their father’s death. Bjorn follows his destiny into the Mediterranean Sea and Floki who is suffering from the loss of his wife Helga, takes to the seas submitting himself to the will of the Gods.