5 facts about the minimum wage. As efforts to raise the federal minimum wage from $7.25 an hour have stalled repeatedly, several states and cities – from Los Angeles to New York state to Washington, D.C. – are acting on their own to raise minimum pay rates. 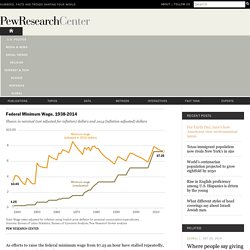 Although some proposals target fast-food workers specifically, organized labor and anti-poverty groups are pushing for $15 an hour as the new standard for all workers paid hourly. While the idea of raising the minimum wage is broadly popular, a Pew Research Center survey from January 2014 found clear partisan differences in support. Overall, 73% of people favored an increase in the federal minimum to $10.10 an hour, mirroring a Democratic-backed proposal that failed to move ahead in Congress last year. But while large majorities of Democrats (90%) and independents (71%) said they favored such an increase, Republicans were more evenly split (53% in favor and 43% opposed).

Here are five facts about the minimum wage and the people who earn it: Category: 5 Facts. M.dailykos. Work and Worth  What someone is paid has little or no relationship to what their work is worth to society. 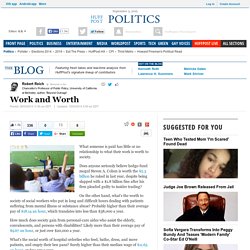 Does anyone seriously believe hedge-fund mogul Steven A. Cohen is worth the $2.3 billion he raked in last year, despite being slapped with a $1.8 billion fine after his firm pleaded guilty to insider trading? On the other hand, what's the worth to society of social workers who put in long and difficult hours dealing with patients suffering from mental illness or substance abuse? Probably higher than their average pay of $18.14 an hour, which translates into less than $38,000 a year. How much does society gain from personal-care aides who assist the elderly, convalescents, and persons with disabilities? What's the social worth of hospital orderlies who feed, bathe, dress, and move patients, and empty their ben pans?

Or of child care workers, who get $10.33 an hour, $21.490 a year? Yet what would the rest of us do without these dedicated people? And what of writers, actors, painters, and poets? Bolivia Is An Example of How Socialism Can 'Work' October 21, 2014 | Like this article? 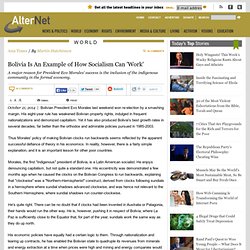 He's quite right. His economic policies have equally had a certain logic to them. Indeed, aided by the windfall in resource revenues, his budgetary policies have been a model of restraint, far better than most other Latin American countries, or indeed than the rich nations of Europe, the US or Japan. Treasury chief wants halt to corporate tax inversions Chicago Tribune 7/17/14. Calling for “a new sense of economic patriotism,” a top Obama administration official urged Congress to take immediate action to stop U.S. companies from reorganizing as foreign firms to avoid paying taxes. 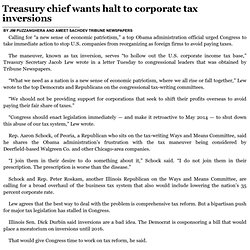 The maneuver, known as tax inversion, serves “to hollow out the U.S. corporate income tax base,” Treasury Secretary Jacob Lew wrote in a letter Tuesday to congressional leaders that was obtained by Tribune Newspapers. “What we need as a nation is a new sense of economic patriotism, where we all rise or fall together,” Lew wrote to the top Democrats and Republicans on the congressional tax-writing committees. “We should not be providing support for corporations that seek to shift their profits overseas to avoid paying their fair share of taxes.”

“Congress should enact legislation immediately — and make it retroactive to May 2014 — to shut down this abuse of our tax system,” Lew wrote. The Presidential Daily Brief - 07/15/2014. In Big Pharma, little aversion to tax inversion Chicago Tribune 7/15/14. AbbVie Inc. appears to be on the verge of a $53.7 billion takeover that would change its corporate address to the United Kingdom. 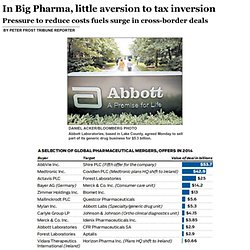 Abbott Laboratories agreed Monday to sell part of its generic drug business for $5.3 billion, structuring the sale in a way that opens the door for the buyer to reincorporate in Europe. Fifteen miles south of the two companies’ shared campus in Lake County, Baxter International Inc. is preparing to split into two in 2015. Its neighbor, fellow Deerfield company Horizon Pharma Inc., plans to move its headquarters to Ireland this year, also as part of an acquisition. A red-hot deal market has sparked a wave of consolidation that is reshaping the pharmaceutical and medical device industry, which includes some of the Chicago area’s largest companies.

Under pressure to cut costs and boost their bottom lines, health care companies here and nationwide are marching toward a series of tie-ups, splits and divestitures.