Rachel Botsman: The currency of the new economy is trust 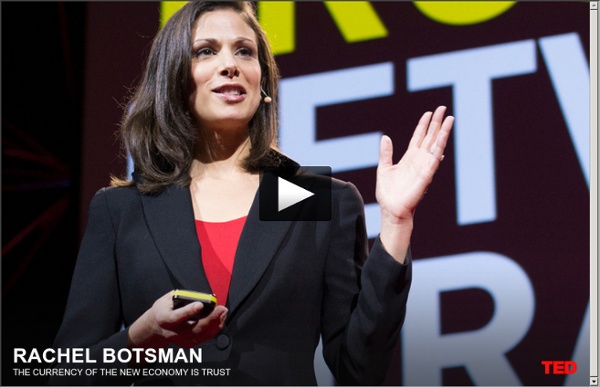 Dieter Suhr, Neutral Money Network Prof. Dr. Dieter Suhr (+) University of Augsburg Neuroeconomics: The Consilience of Brain and Decision Paul W. Glimcher 1 * , and Aldo Rustichini 2 Economics, psychology, and neuroscience are converging today into a single, unified discipline with the ultimate aim of providing a single, general theory of human behavior. This is the emerging field of neuroeconomics in which consilience, the accordance of two or more inductions drawn from different groups of phenomena, seems to be operating. Economists and psychologists are providing rich conceptual tools for understanding and modeling behavior, while neurobiologists provide tools for the study of mechanism. The goal of this discipline is thus to understand the processes that connect sensation and action by revealing the neurobiological mechanisms by which decisions are made.

The collaborative economy in your neighborhood: welcome to StreetBank The idea that neighbors can share their resources efficiently is not new, however there are very few examples of successful initiatives to date. Many sharing schemes failed after only a few years. A successful example of such a model is StreetBank, a platform in England that is growing steadily. We took a moment to chat with Sam Stephens, StreetBank’s founder, about the reasons for the site’s growth. StreetBank is an online platform that allows neighbors to collectively share items they possess individually. Top 10 Social Media Management Tools Social media is one of the most effective ways for you and your business to get more traffic and generate new leads. Having a presence on all the major networks like Facebook, Twitter and LinkedIn is a necessity these days for any business. But what tools are the social media gurus actually using to manage these multiple accounts? 1 Hootsuite

Local currency See Emissions Reduction Currency System for community based initiatives aimed at emission reduction In economics, a local currency, in its common usage, is a currency not backed by a national government (and not necessarily legal tender), and intended to trade only in a small area. As a tool of fiscal localism, local moneys can raise awareness of the state of the local economy, especially among those who may be unfamiliar or uncomfortable with traditional bartering.[citation needed]

Metacurrency Collabathon: a wealth system After Sibos, Q4 is usually the period of the year when I try to re-boot, to refresh my sources, to be a sponge and take-in new knowledge. It’s when I start painting for the next year. When the themes and trends for next year start emerging. I wanted to get a much better feel for what this world of alternative and complementary currencies was all about, and decided to join a week-end “Collabathon” organized by Art Brock (@artbrock) and Eric Harris-Braun (@zippy314), the founders of The Metacurrency Project. In the slipstream of the Contact Summit, they wanted to gather the minds to work on NextNet ideas and tools. From their site:

oxytocin increases generosity Human beings routinely help strangers at costs to themselves. Sometimes the help offered is generous—offering more than the other expects. The proximate mechanisms supporting generosity are not well-understood, but several lines of research suggest a role for empathy. The Freecycle Network On May 1st, 2003, Deron Beal sent out the first e-mail announcing The Freecycle Network™ to about 30 or 40 friends and a handful of nonprofits in Tucson, Arizona. At the time Deron founded The Freecycle Network, he worked with a small nonprofit organization, RISE, which provides recycling services to downtown businesses and transitional employment to Tucsonans in need. As the team recycled, rather than watching perfectly good items being thrown away, they found themselves calling or driving around to see if various local nonprofits could use them. Thinking there had to be an easier way, Beal set up that first Freecycle e-mail group in a way that permitted everyone in Tucson to give and to get. Freecycle was off and running.