FinTech Landscape. 3 Big Reasons Startups Fail (and How to Avoid Them) Across all industries, the majority of startups will fail within their first several years. 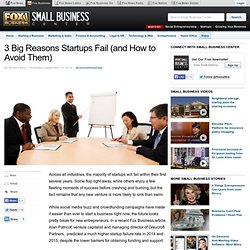 Some flop right away, while others enjoy a few fleeting moments of success before crashing and burning, but the fact remains that any new venture is more likely to sink than swim. While social media buzz and crowdfunding campaigns have made it easier than ever to start a business right now, the future looks pretty bleak for new entrepreneurs. In a recent Fox Business article, Alan Patricof, venture capitalist and managing director of Greycroft Partners, predicted a much higher startup failure rate in 2014 and 2015, despite the lower barriers for obtaining funding and support. Why do so many new companies continue to fail, even with the advanced consumer data and technology available to today's business owners? In some cases it's out of their hands, such as a sharp economic swing or decline in market demand. Lack of research and planning Financial mismanagement Poor hiring and leadership practices. 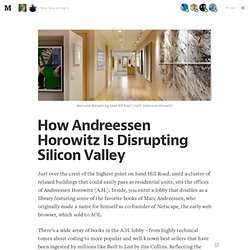 The firm sees itself as a talent management company, and the model that Andreessen and Horowitz used comes from a very surprising place as far as innovations in Silicon Valley go: Hollywood. Hollywood? Yes, Hollywood. It’s counter-intuitive, I know, but here’s the quick story. When Andreessen and Horowitz came together in 2009 to start a firm after their time together at Opsware, they focused on recreating a talent management model like the one pioneered by Michael Ovitz, the founder of Creative Artists Agency.

G.E. hosted the event in a cool warehouse space in San Francisco’s creative and highly entrepreneurial “Dogpatch” neighborhood. Anyhow, at the event, I also ran into Suhail Doshi, the founder of mixpanel, a hot start-up in the mobile analytics space. After Jeff Immelt and Comstock spoke, Doshi and I hung out by the giant engine, and decided to snap a picture. Ron Conway can only cover so much ground on his own. The Ultimate Startup Intelligence Tools List 2013. It used to be hard to find information about early stage startups. 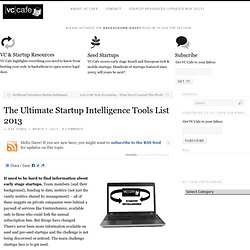 Team members (and their background), funding to date, metrics (not just the vanity metrics shared by management) – all of these nuggets on private companies were behind a paywall of services like VentureSource, available only to those who could fork the annual subscription fees. But things have changed. There’s never been more information available on seed and pre-seed startups and the challenge is not being discovered or noticed. The main challenge startups face is to get used.

VC Cafe’s Startup Intelligence Tools List 2013 This is a comprehensive list of tools and companies who provide intelligence data on tech startups from pre-seed (alpha) to mature startups pre-acquisition. (Note: If you plan to copy or share this list, please attribute credit to the source. Corporate (Paid) subscription Services. So you want to be a venture capitalist? This is a guest post by Campus London chief Eze Vidra You’ve always wanted to be a VC.

Maybe it’s the diversity of deals and the industry that attracts you. Maybe it sounds sexy. You are probably armed with a freshly minted MBA and some experience in finance and/or technology. However, with very few job openings a year, landing that dream job in venture can be harder than you think. What profile do you need to work in VC? The short answer: it depends. There are plenty of books on how to be a successful entrepreneur, so this post is focused on how to work your way up in venture. The average partner is 46 years old. Mark Suster, entrepreneur turned VC, posted on his excellent blog when he was recruiting for two VC analysts for GRP Partners. “The chosen candidate will probably have worked for a very reputable firm that is either in technology, consulting, investment banking, media or a startup . If they won’t hire you, blaze your own trail There aren’t many VC jobs out there to begin with.