Bedtime Reading: Demand in the Long Run. There is a strand of economic theory concerned with the operation of Keynes’ principle of effective demand in the long run. 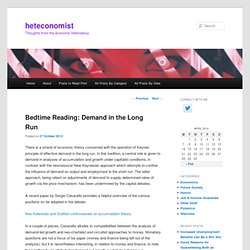 In this tradition, a central role is given to demand in analyses of accumulation and growth under capitalist conditions, in contrast with the neoclassical New Keynesian approach which attempts to confine the influence of demand on output and employment to the short run. The latter approach, being reliant on adjustments of demand to supply-determined rates of growth via the price mechanism, has been undermined by the capital debates. A recent paper by Sergio Cesaratto provides a helpful overview of the various positions so far adopted in the debate: Neo-Kaleckian and Sraffian controversies on accumulation theory In a couple of places, Cesaratto alludes to compatibilities between the analysis of demand-led growth and neo-chartalist and circuitist approaches to money.

Good Introduction to the Capital Debates. Others, including Tom Hickey, Robert Vienneau and Lord Keynes, have already mentioned this, but Matias Vernengo has provided an educational post on the content and significance of the capital debates. For those who are unfamiliar with the debates or remain uncertain of what was involved, Vernengo’s post is well worth reading. It is both informative and accessible. I won’t summarize the post here, because it is better to follow the link to Vernengo’s actual post. On the Market Evaluation of Productiveness. This is a brief follow-up to a couple of previous posts (here and here) that concern the market evaluation of social productiveness. 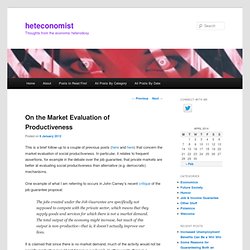 In particular, it relates to frequent assertions, for example in the debate over the job guarantee, that private markets are better at evaluating social productiveness than alternative (e.g. democratic) mechanisms. Taking Demand Seriously. Taking the role of effective demand seriously can sometimes seem to put you between a rock and a hard place in relation to other economists. 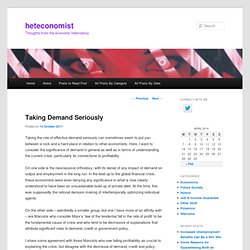 Here, I want to consider the significance of demand in general as well as in terms of understanding the current crisis, particularly its connections to profitability. On one side is the neoclassical orthodoxy, with its denial of any impact of demand on output and employment in the long run. In the lead up to the global financial crisis, these economists were even denying any significance in what is now clearly understood to have been an unsustainable build up of private debt. At the time, this was supposedly the rational decision making of intertemporally optimizing individual agents. I share some agreement with those Marxists who see falling profitability as crucial to explaining the crisis, but disagree with the dismissal of demand, credit and policy factors. The capital debates: A brief introduction. Teaching on the capital debates this and last week. 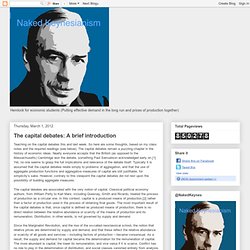 So here are some thoughts, based on my class notes and the required readings (see below). More on Keynes vs the Neoclassical Synthesis. Yesterday (here) I linked to a post by Matias Vernengo on Keynes’ theoretical contribution in light of the capital debates. 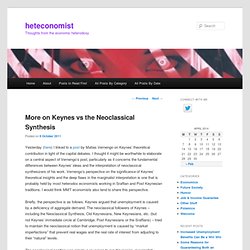 I thought it might be worthwhile to elaborate on a central aspect of Vernengo’s post, particularly as it concerns the fundamental differences between Keynes’ ideas and the interpretation of neoclassical synthesizers of his work. Vernengo’s perspective on the significance of Keynes’ theoretical insights and the deep flaws in the marginalist interpretation is one that is probably held by most heterodox economists working in Sraffian and Post Keynesian traditions. I would think MMT economists also tend to share this perspective. Lucas in context, Keynes out of context. Krugman decided to try his hand at history of macroeconomic thought in one of his last posts. 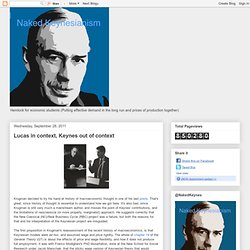 That's great, since history of thought is essential to understand how we got here. It's also bad, since Krugman is still very much a mainstream author, and misses the point of Keynes' contributions, and the limitations of neoclassical (or more properly, marginalist) approach. Krugman Mentions MMT Again … In “What are Taxes For?” 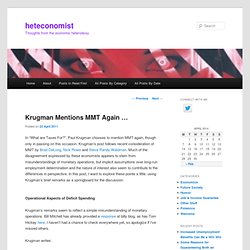 , Paul Krugman chooses to mention MMT again, though only in passing on this occasion. Krugman’s post follows recent consideration of MMT by Brad DeLong, Nick Rowe and Steve Randy Waldman. Misinterpreting the Sectoral Balances. The government deficit equals the non-government surplus, by definition. 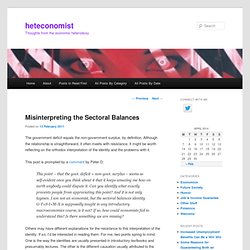 Although the relationship is straightforward, it often meets with resistance. It might be worth reflecting on the orthodox interpretation of the identity and the problems with it. This post is prompted by a comment by Peter D: This point – that the govt. deficit = non-govt. surplus – seems so self-evident once you think about it that it keeps amazing me how on earth anybody could dispute it.

Interest, Money and Crisis. Throughout the history of economic thought, opposing perspectives on interest and money have created fundamental divides between the various schools. 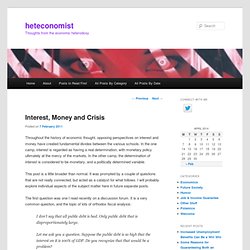 In the one camp, interest is regarded as having a real determination, with monetary policy ultimately at the mercy of the markets. In the other camp, the determination of interest is considered to be monetary, and a politically determined variable. This post is a little broader than normal. It was prompted by a couple of questions that are not really connected, but acted as a catalyst for what follows.

I will probably explore individual aspects of the subject matter here in future separate posts. The first question was one I read recently on a discussion forum. Straw Men (And Women) This post is for all the MMT foot soldiers out there in cyberspace, including myself and most readers (prominent MMT economists who are kind enough to drop in from time to time excepted, of course). 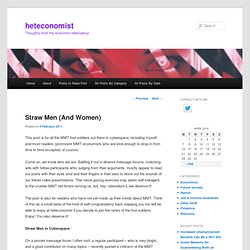 Come on, we know who we are. Battling it out in diverse message forums, matching wits with fellow participants who, judging from their arguments, mostly appear to read our posts with their eyes shut and their fingers in their ears to block out the sounds of our linked video presentations. This navel-gazing exercise may seem self-indulgent to the crustier MMT old-timers among us, but, hey, rationalize it, we deserve it! QE is not Inflationary – Just Ineffective. In the US, the Fed has just commenced another round of quantitative easing.

This is despite the absence of any evidence to suggest that previous implementations of the policy – in Japan, the UK or the US – have had any significant impact on demand, output and employment. At the same time, some critics of quantitative easing claim that the policy will be inflationary. But this claim also defies both theoretical considerations and the empirical evidence. The policy is not inflationary, just impotent. The Fed’s decision to persist with the policy probably says more about the neo-liberal distaste for discretionary fiscal policy than any confidence that QE2 will be more successful than its predecessor. An earlier discussion of quantitative easing can be found here. Krugman and Galbraith on Deficits. In a recent NYT post, “I Would Do Anything for Stimulus But I Wouldn’t Do That (Wonkish)”, Paul Krugman writes: Right now, the real policy debate is whether we need fiscal austerity even with the economy deeply depressed.

Obviously, I’m very much opposed — my view is that running deficits now is entirely appropriate.But here’s the thing: there’s a school of thought which says that deficits are never a problem, as long as a country can issue its own currency. The most prominent advocate of this view is probably Jamie Galbraith, but he’s not alone. In this passage, Krugman misinterprets Modern Monetary Theory (MMT) from the outset. MMT does not say “deficits are never a problem”. Rather, the theory suggests that the appropriate level of deficit expenditure is that amount just sufficient to sustain full-employment output given private-sector net saving intentions.

Krugman continues: … I can’t go along with [Galbraith's] view that. Taxation, Money, Freedom and Economy. MMT implies some interesting connections between money, taxes, social cooperation, freedom and different economic systems. In particular, it brings to light some of the social possibilities opened up by fiat money. It seems clear that under any social system it will be necessary to impose at least minimal constraints on social activity in some sense until and unless we can evolve to a level where all cooperation is spontaneous and voluntary. Personally, I am on the side of keeping those constraints, in their overall effect on personal freedoms, as minimal as possible. I think economic libertarians are correct to identify tax obligations as one form of social constraint on individual behavior. Taxation serves various roles under capitalism – a measure of business-cycle stabilization, a degree of income redistribution, and an opening up of space for public-sector activity.

It is possible to conceive of economic systems without taxation. Thinking in a Macro Way. To understand aggregate behavior, it is necessary to start at the aggregate or macro level of analysis rather than the individual or micro level. This is because there are certain relationships that must hold, by definition, at the aggregate level.

These relationships are specified in macroeconomic accounting identities. Critique of Riedl on Government Spending. The abstract to Brian Riedl’s Heritage Foundation paper Why Government Spending Does Not End Recessions: Answering the Critics reads: Despite decades of repeated failure, President Obama and Congress continue to promote the myth that government can spend its way out of recession. Heritage Foundation economic policy expert Brian Riedl dispels the stimulus myth, lays out the evidence that government spending does not end recessions–and presents the evidence for what does end recessions. Hint: It’s not another “stimulus package.”