Atheist Ethicist: Capital Punishment Without God. Austin Cline had a piece on About Atheism yesterday about capital punishment and mental competence (particularly, insanity). 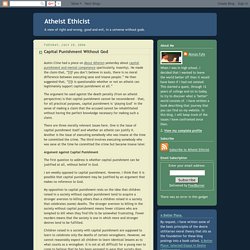 He made the claim that, “[I]f you don’t believe in souls, there is no moral difference between executing sane and insane people.” He then suggested that, “[I]t is questionable whether or not an atheist can legitimately support capital punishment at all.” The argument he used against the death penalty (from an atheist perspective) is that capital punishment cannot be reconsidered – that, for all practical purposes, capital punishment is ‘playing God’ in the sense of making a claim that the accused cannot be rehabilitated without having the perfect knowledge necessary for making such a claim. There are three morally relevant issues here.

One is the issue of capital punishment itself and whether an atheist can justify it. Argument Against Capital Punishment The first question to address is whether capital punishment can be justified at all, without belief in God. Capital punishment - the death penalty. The Church's Anti-Death Penalty Position. The new evangelization calls for followers of Christ who are unconditionally pro-life: who will proclaim, celebrate and serve the Gospel of life in every situation. 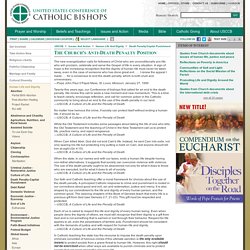 A sign of hope is the increasing recognition that the dignity of human life must never be taken away, even in the case of someone who has done great evil. . . . I renew the appeal I made . . . for a consensus to end the death penalty, which is both cruel and unnecessary. —Pope John Paul II Papal Mass, St. Louis, Missouri, January 27, 1999 Twenty-five years ago, our Conference of bishops first called for an end to the death penalty. No matter how heinous the crime, if society can protect itself without ending a human life, it should do so.

While the Old Testament includes some passages about taking the life of one who kills, the Old Testament and the teaching of Christ in the New Testament call us to protect life, practice mercy, and reject vengeance. When Cain killed Abel, God did not end Cain's life. Catholicism and Capital Punishment. Among the major nations of the Western world, the United States is singular in still having the death penalty. 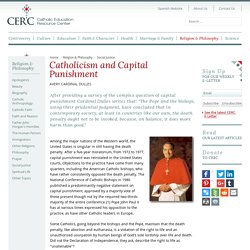 After a five-year moratorium, from 1972 to 1977, capital punishment was reinstated in the United States courts. Objections to the practice have come from many quarters, including the American Catholic bishops, who have rather consistently opposed the death penalty. The National Conference of Catholic Bishops in 1980 published a predominantly negative statement on capital punishment, approved by a majority vote of those present though not by the required two-thirds majority of the entire conference.{1} Pope John Paul II has at various times expressed his opposition to the practice, as have other Catholic leaders in Europe.

Some Catholics, going beyond the bishops and the Pope, maintain that the death penalty, like abortion and euthanasia, is a violation of the right to life and an unauthorized usurpation by human beings of God's sole lordship over life and death. The Ethics of Capital Punishment. This article first appeared in the Christian Research Journal, volume 17, number 1 (1994). 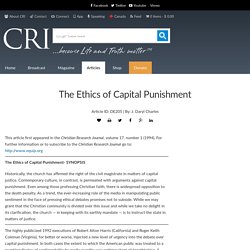 For further information or to subscribe to the Christian Research Journal go to: The Ethics of Capital Punishment- SYNOPSIS Historically, the church has affirmed the right of the civil magistrate in matters of capital justice. Contemporary culture, in contrast, is permeated with arguments against capital punishment. Even among those professing Christian faith, there is widespread opposition to the death penalty. The highly publicized 1992 executions of Robert Alton Harris (California) and Roger Keith Coleman (Virginia), for better or worse, injected a new level of urgency into the debate over capital punishment. Capital Punishment (The Practice of Morality) Capital Punishment From Moral Issues that Divide Us and Applied Ethics: A Sourcebook James Fieser www.utm.edu/staff/jfieser/class Copyright 2008 Updated: 1/1/2015 Contents 1. 2. 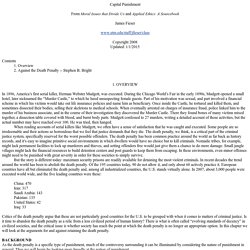 In 1896, America’s first serial killer, Herman Webster Mudgett, was executed. When reading accounts of serial killers like Mudgett, we often have a sense of satisfaction that he was caught and executed. But the story is different today: maximum security prisons are readily available for detaining the most violent criminals. China: 470 Iran: 317 Saudi Arabia: 143 Pakistan: 135 United States: 42 Iraq: 33 Critics of the death penalty argue that these are not particularly good countries for the U.S. to be grouped with when it comes to matters of criminal justice. Moral & Ethical Issues. Ethics: Capital punishment.