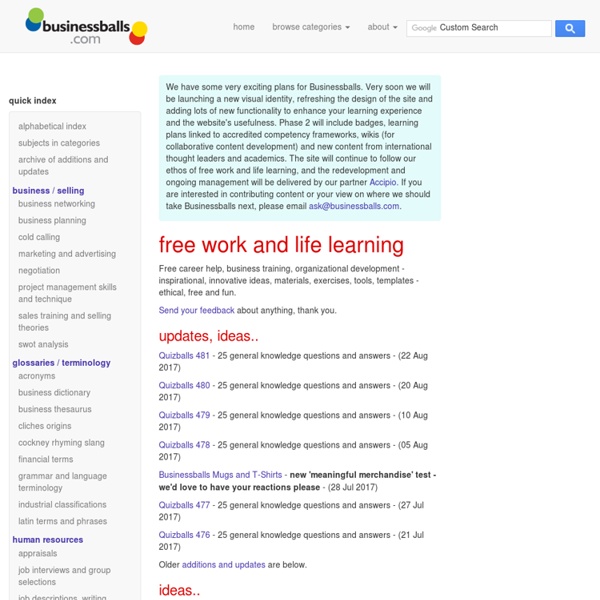 The British Library Puts 1,000,000 Images into the Public Domain, Making Them Free to Reuse & Remix Earlier this week, Oxford's Bodleian Library announced that it had digitized a 550 year old copy of the Gutenberg Bible along with a number of other ancient bibles, some of them quite beautiful. Not to be outdone, the British Library came out with its own announcement on Thursday: We have released over a million images onto Flickr Commons for anyone to use, remix and repurpose.

Heron's Six Categories of Intervention A couple of weeks ago sparked by this article in the Sunday Times, we had a lively dialogue on the LinkedIn coaching groups about whether it is the coach’s role to give the CEO ‘a kick up the pants’. A couple of times people referred to Heron’s six categories of intervention and how this had helped them in their coaching. This is a model I had not come across before so I checked it out and here is my summary of it in the context of challenging coaching. John Heron’s framework provides a model for analysing how you deliver help.

100 Amazing How-To Sites to Teach Yourself Anything Learning new skills and expanding your knowledge doesn’t have to cost you an arm and a leg. There are loads of free resources on the Web that can help you find instructional videos, tutorials and classes to learn a wide variety of skills from fixing basic car problems to speaking another language. With 100 sites to choose from, you’re bound to find something here that will help you learn just about anything you could want. General Tutorials These sites offer a wide range of tutorials and videos. Around the House Journeyman Pictures For over twenty years Journeyman has distributed and co-produced, provocative, profound and original factual content, working with the top players in the industry. We're one of the leading independent suppliers of award winning stories to the world broadcast market and pride ourselves on a position at the spearhead of the factual agenda. With a very successful catalogue covering a myriad of subjects and styles; commercial, current affairs, and feature docs, we always keep at heart a central journalistic ethic that goes to the very roots of the company. After years reporting from dangerous war zones across the world, company founder Mark Stucke began formulating a unique distribution system that would bring a greater return for the valuable copyright he and fellow producers were risking their necks to create. We operate 3 departments: documentaries, news, and footage.

Sales Training Sales training This information is so valuable that people have paid tens of thousands of dollars to learn it through sales training courses. Corporations have spent hundreds of thousands of dollars to consultants to teach these sales training methods to their marketing departments. Pay extra close attention to this chapter until you have it memorized because once you begin using these techniques it won’t be long before your business (and bank account) begin to hit critical mass. And it’s easier than you think!

32 Research-Based Instructional Strategies - 32 Research-Based Instructional Strategies by TeachThought Staff You want to teach with what’s been proven to work. That makes sense. Resources Tools for being Remarkable What man doesn’t like tools? Well here are the tools you need to re-build yourself as a Remarkable Man. This resource page is taken from to be published book – Grow Up: A Man’s Guide to Masculine Emotional Intelligence™ – the 9 Steps to releasing the Remarkable Man within You. . I kept the references to the other parts of the book in this resource guide to give you a sense what the book is about.

Alan Kay Alan Curtis Kay (born 17 May 1940) is an American computer scientist known for his early pioneering work on object-oriented programming and windowing graphical user interface design. Sourced[edit] 1970s[edit] The best way to predict the future is to invent it.Alan Kay (1971) at a 1971 meeting of PARCSimilar remarks are attributed to Peter Drucker and Dandridge M. Top Ten Tips for developing a Growth Mindset in your Classroom Be Critical. Students should expect and welcome criticism. They must also be given the opportunity to act on any criticism or critique. This will allow students to realise that through improving their work and responding to feedback, they can be better than they were.