Toys that give girls confidence in problem-solving 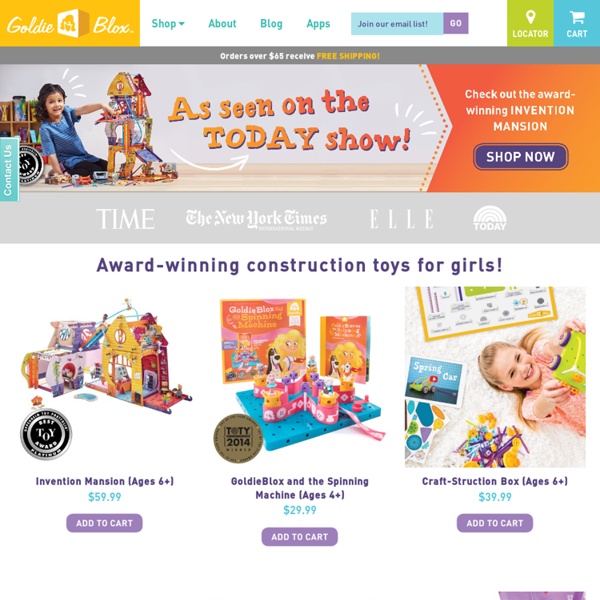 Gwenda Bond You’ve heard of Shakespeare in the Park, but Shakespeare at the circus? That may be a new one. But that didn’t stop Gwenda Bond from using one of the bard’s most popular plays as one of the inspirations for her new novel, Girl on a Wire. Now she’s here to talk about how to achieve this precarious balancing act. A sixteen-year-old girl walks on a wire high above a city. She balances—easily, then precariously—on the invisible weight of her family history. The girl’s name is Jules. The Big Idea then, for Girl on a Wire, as it presented itself: Romeo and Juliet retold in the modern circus, centered on the latest generation of decades-long competing circus dynasties. A confession: I can’t stand the romance in Romeo and Juliet. Fate and choice; we live our lives crossing our fingers for both, at one time or another. This book started with the flu. It was the first time I’d ever encountered Petit, and he mentioned a book he’d written called On the High Wire.

Toy Awards Eat Great Food //_.YORUBA.CULTURAL.INSTITUTE._\\ Apply for Summer Intensive Apply for One on One Tutorial Apply for Online Course Background Based upon the requests of native speakers of Yoruba who want to learn the language, and upon our experience teaching students who have requested we teach groups they form, we have developed a fool-proof mechanism for learning the Yoruba language. The Yoruba Cultural Institute offers a number of learning options. More importantly, our program focuses primarily on realistic dialogue for students of all levels. Extra-Curricular In addition to classroom instruction, our program supports language learning through outside cultural activities that emphasize language use. Immersion Intensive (Summer: June to August) (Fall: September to November) What’s NYC in the Summer but a festival of African Culture? SUMMER DATES: June 3 to August 21st Location: Brooklyn, NY Course includes leading Yoruba Instructional materials from Nigerian authors, musicians and artists. Course Includes: Apply Now Apply Now Course includes:

Steven E. Schend Self-Organization in Science and Society THE MYSTERY OF HANNIBAL'S ELEPHANTS ARCHEOLOGISTS have tried. Students of ancient climate and ecology have tried, too. But no one has yet come up with a satisfactory answer: Where did Hannibal get the elephants for his heroic march across the Alps to attack the homeland of the Romans? The question was raised anew in the Sept. 6 issue of New Scientist, a British magazine. Once there were elephants nearly everywhere, but by the time of Hannibal's march in 218 B.C. they had already dwindled to the two species extant today, the Indian, or Asian, elephants and the African ones. If he had had a choice, Hannibal would presumably have gone into battle with Indian elephants, which had been used effectively a century before in charging against the forces of Alexander the Great. The bigger and ill-tempered African elephants are distinguished by their larger, fan-shaped ears, flat foreheads and concave backs. But how did Hannibal, in Carthage, on the Mediterranean in present-day Tunisia, get a troop of elephants all the way from Asia?

The University of Alaska Anchorage Podcast and RSS Feed The UAA Complex Systems Group presents Dr. Ron Eglash. Self-organization has become an increasingly important phenomenon in both the natural sciences and engineering. Dr. Architecture of Africa The architecture of Africa, like other aspects of the culture of Africa, is exceptionally diverse. Many ethno-linguistic groups throughout the history of Africa have had their own architectural traditions. In some cases, broader styles can be identified, such as the Sahelian architecture of an area of West Africa. One common theme in much traditional African architecture is the use of fractal scaling: small parts of the structure tend to look similar to larger parts, such as a circular village made of circular houses.[1] As with most architectural traditions elsewhere, African architecture has been subject to numerous external influences from the earliest periods for which evidence is available. Western architecture has also had an impact on coastal areas since the late 15th century, and is now an important source for many larger buildings, particularly in major cities. African architecture uses a wide range of materials. Early architecture[edit] North Africa[edit] Egypt[edit] Nubia[edit]