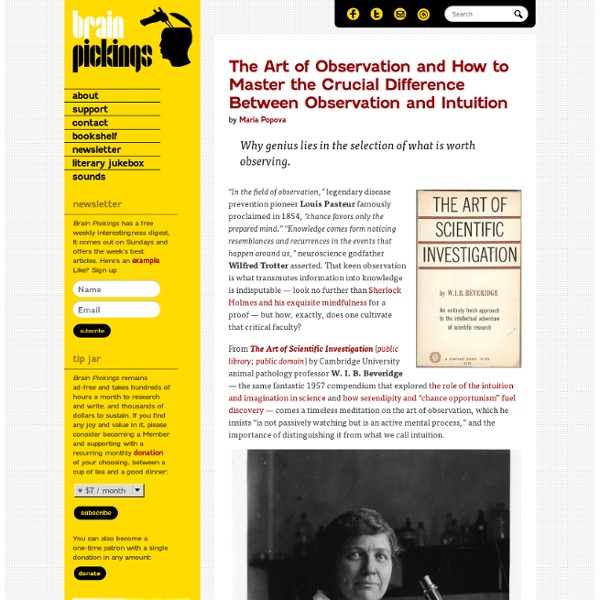 by Maria Popova Why genius lies in the selection of what is worth observing. “In the field of observation,” legendary disease prevention pioneer Louis Pasteur famously proclaimed in 1854, “chance favors only the prepared mind.” “Knowledge comes from noticing resemblances and recurrences in the events that happen around us,” neuroscience godfather Wilfred Trotter asserted. That keen observation is what transmutes information into knowledge is indisputable — look no further than Sherlock Holmes and his exquisite mindfulness for a proof — but how, exactly, does one cultivate that critical faculty? From The Art of Scientific Investigation (public library; public domain) by Cambridge University animal pathology professor W. Though a number of celebrated minds favored intuition over rationality, and even Beveridge himself extolled the merits of the intuitive in science, he sides with modern-day admonitions about our tendency to mislabel other cognitive processes as “intuition” and advises:

The Great Philosophers 10: Martin Heidegger The field is not without other distinguished contestants, but in the competitive history of incomprehensible German philosophers, Martin Heidegger must by any reckoning emerge as the overall victor. Nothing quite rivals the prose of his masterpiece Being and Time (1927) in terms of contortions and the sheer number of complex compound German words which the author coined, among them ‘Seinsvergessenheit’ (Forgetfulness of Being), ‘Bodenständigkeit’ (Rootedness-in-soil) and ‘Wesensverfassung’ (Essential Constitution). At first, it is likely to be puzzling and perhaps irritating, but gradually, one may warm to the style and understand that beneath its vaporous surface, Heidegger is telling us some simple, even at times homespun truths about the meaning of our lives, the sicknesses of our time and the routes to freedom. He was born, and in many ways remained, a rural provincial German, who loved picking mushrooms, walking in the countryside and going to bed early. © Getty Conclusion

Why Consciousness Exists: Douglas Rushkoff on Science, God, and the Purpose of Reality by Maria Popova What to make of the fact “that something wonderfully strange is going on in the dimension we call reality.” “If we ever reach the point where we think we thoroughly understand who we are and where we came from,” Carl Sagan wrote in his magnificent meditation on science and spirituality, “we will have failed.” Joining that canon of intellectual elegance is media analyst, documentarian, and writer Douglas Rushkoff with his contribution to This Idea Must Die: Scientific Theories That Are Blocking Progress (public library) — that mind-stretching volume by Edge founder John Brockman, who posed before 175 of the world’s greatest scientists, philosophers, and writers the certainty-rattling question: “What scientific idea is ready for retirement?” Rushkoff points the skeptical prod of his answer at “the atheism prerequisite” — atheism, of course, being a case of our curious tendency to define what we are by what we are not — and writes: Donating = Loving Share on Tumblr