Comment Policy. One of Autostraddle’s core values is community – specifically, creating a space for a new generation of kickass lesbian, bisexual & otherwise inclined ladies and their friends. 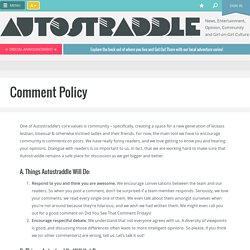 For now, the main tool we have to encourage community is comments on posts. We have really funny readers, and we love getting to know you and hearing your opinions. Dialogue with readers is so important to us, in fact, that we are working hard to make sure that Autostraddle remains a safe place for discussion as we get bigger and better. A. Things Autostraddle Will Do: Respond to you and think you are awesome. B. Reveal the identity or personal information of a user. If you see an error in a post, please email us [laneia/at/autostraddle/dot/com] so we can make the fix! Also: If you can comment on a thread without reading the post the thread is about, probably just don’t leave that comment. C. We’re really sick of having the same fruitless debates over and over again. D. E. Read the whole thing here. 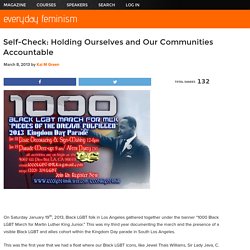 This was my third year documenting the march and the presence of a visible Black LGBT and allies cohort within the Kingdom Day parade in South Los Angeles. This was the first year that we had a float where our Black LGBT icons, like Jewel Thais Williams, Sir Lady Java, C. Jerome Woods, and Sandra Tignor rode through the city. On this day our often unrecognized local Black queer historical figures were honored and literally lifted up on a pedestal for all to admire. Deaf Echo » Writing for and by Deaf people » Four ways to create a safe space. Through my experience at being involved in the DYUSA petition to CSD Fremont to move The Bear Hunt statue, I have experienced many reactions from other people — from the beautiful to the ugly. 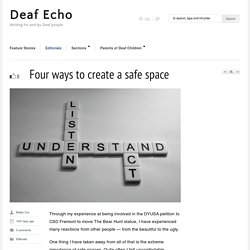 One thing I have taken away from all of that is the extreme importance of safe spaces. Quite often I felt uncomfortable, unwelcome, and/or unsafe where I was. And when I discussed this with others, especially people of color or women (or both), I discovered that this was something that they were intimately familiar with.

Creating A Safe Space for Others. Yesterday I talked about how we can create a safe space for ourselves, to listen to our needs, wants and wishes and to compassionately care for ourselves. 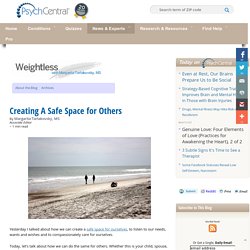 Today, let’s talk about how we can do the same for others. Alternate Activity 2: Creating Safe Space. Aop - metanarchism. Autistic Hoya: There is no such thing as safe space. Trigger warning: Ableist slurs, specifically the r-word. 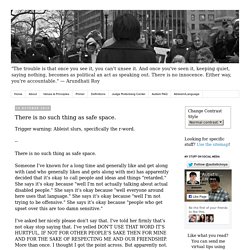 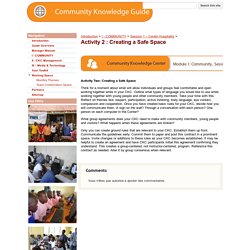 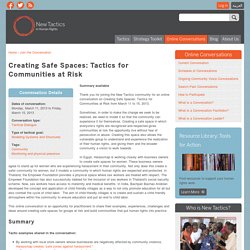 Sometimes, in order to make the change we seek to be realized, we need to model it so that the community can experience it for themselves. 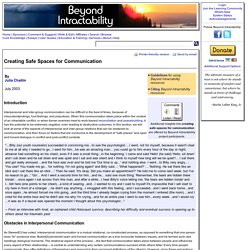 When this communication takes place within the context of an intractable conflict, or when former enemies meet to work toward reconciliation and peacebuilding, it has the potential to be extremely negative, even leading to destructive outcomes. Safe Space as Resistance: Why the Status Quo is Not Safe, and Why that’s a Scary Idea.

Two weeks ago, a student at Duke University hung a noose outside of the student commons building. 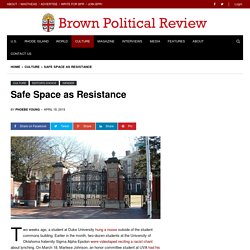 Earlier in the month, two-dozen students at the University of Oklahoma fraternity Sigma Alpha Epsilon were videotaped reciting a racist chant about lynching. On March 18, Martese Johnson, an honor committee student at UVA had his head bashed to the ground by an Alcohol and Beverage Control police officer. These events are not isolated incidents and they are not outliers. They are reflections of a larger, institutionalized culture of systematic persecution that extends beyond college campuses: last Saturday, April 4, Walter Scott was shot eight times, unarmed, by police officer Michael T.

Slager. Judith Shulevitz’s “In College and Hiding From Scary Ideas” fundamentally misses the point about the creation and formation of “safe spaces” on college campuses. The Myth of Safe Spaces (and Some Happy Discoveries) I want to start with the statement that I can have my own opinions and still be a part of a community and an ally to my community (or various communities). 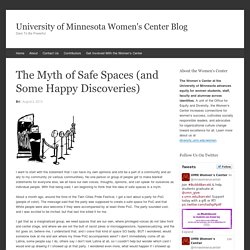 No one person or group of people get to make blanket statements for everyone else, we all have our own voices, thoughts, opinions, and can speak for ourselves as individual people. With that being said, I am beginning to think that the idea of safe spaces is a myth. About a month ago, around the time of the Twin Cities Pride Festival, I got a text about a party for PoC (people of color). The message said that the party was supposed to create a safe space for PoC and that White people were also welcome if they were accompanied by at least three PoC. The party sounded cool, and I was excited to be invited, but that last line killed it for me. Needless to say, I ended up passing over this party.

Where is the happy medium? I don’t really agree with either of these approaches. –Bebe –Choquib Town –Girl in a Coma. There are no safe spaces. Since I started writing in the Feministing Community I have seen the idea of a safe space come up when comment threads take offensive turns. I find the notion of creating a safe space on a highly trafficked website dubious. Hate speech should never be tolerated but, though we can edit comments and ban users, it cannot be completely prevented. Asker '17: The importance of safe spaces. Last week Judith Shulevitz, a contributing op-ed writer for the New York Times, wrote a column ridiculing the idea of safe spaces on college campuses. The problem is, she simply doesn’t do the concept of safe space justice.

Saying that there are hypersensitive students on college campuses who push safe spaces too far, giving some extreme anecdotes to illustrate this point and then concluding that these students are ruining higher education is an unfair and unsound move. But I can see how it is comforting, even therapeutic, to feel like the older generation contains “hardier souls” than today’s students. Irony aside, I will argue that Shulevitz neglects to account for the invaluable thing the safe space movement has to offer — namely, a means to root out everyday oppression ­­— but first I will make clear where I agree with her.

I also agree that the choice to walk away from a debate should be made carefully. Safe space. Safe space is a term for an area or forum where either a marginalised group are not supposed to face standard mainstream stereotypes and marginalisation, or in which a shared political or social viewpoint is required to participate in the space. For example, a feminist safe space would not allow free expression of anti-feminist viewpoints, and would typically also prevent concern trolling and continual Feminism 101 discussions in favour of feminist discussion among feminists. Safe spaces may require trigger warnings and restrict content that might hurt people who have strong reactions to depictions of abuse or harm or mental illness triggers.

Physical safe spaces exist in some geek communities; for instance, WisCon had a safe space for people of colour in 2009, and women-centric events such as the LinuxChix miniconf effectively act as safe spaces, although not overtly advertised as such. Women-only classes and workshops are also safe spaces. Problems with safe space Edit Incidents. Safe Spaces. “In order for any discussion to be productive, you must create an open and relaxed atmosphere.”

-Anti-Oppression discussion guidelines You can use this tool creatively, adapting the intensity of the 4 basic principles to different situations, depending on the level of risk being taken in each setting. Some components of these tools may be inappropriate for some settings, and invaluable in others. The more personal risk involved, the more carefully you want to frame the space at the outset, because a secure anchor is the only thing that will enable a process to fly to the heights of its potential. A few settings I’ve used this tool in are: board meeting, activist/organizational meetings, co-facilitators/teachers meeting, co-op/group house meeting, personal relationship talks, and discussions with persons of authority. This is a list generated by 2007 Action Camp participants of guidelines for creating asafe space throughout the week.

Gr7-12_L1_CreateSafeSpace.pdf. Mindfulness-practice.pdf. Safe space vs discussion space, and the concept of narrative : SRSDiscussion. 6 Reasons Why We Need Safe Spaces. I’m quite involved in a number of online feminist communities, most of which attempt to be safe spaces. And lately, I’ve been hearing plenty of criticisms of these spaces. There are some useful criticisms that point out how our communities should be more inclusive, less oppressive, and more accommodating to marginalized groups. As feminism has traditionally excluded many marginalized groups of people, it’s important that we center on oppressed voices.

Then, there are some criticisms that are less useful. Starting a club at my university: How to make it a positive/safe space? : socialjustice101. The Safe Space Network. Safe-space. Safe Space Policy. Photo by Corinne Warnshuis. Look Ma, No House (There's No Such Thing As A Safe Space) Identities In Our Movement. Viewcontent.