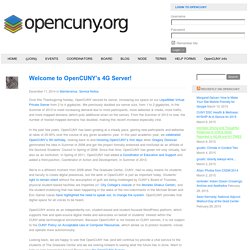 We previously doubled our server size, from 1 to 2 gigabytes, in the Summer of 2013 to meet increasing demand due to more participants, more websites & media, more traffic, and more mapped domains (which puts additional strain on the server). From the Summer of 2013 to now, the number of hosted mapped domains has doubled, making this recent increase especially vital. In the past few years, OpenCUNY has been growing at a steady pace, gaining new participants and websites at rates of 25-50% over the course of any given academic year.

In this past academic year, we celebrated OpenCUNY’s 5th birthday, looking back to and honoring OpenCUNY’s first days when Gregory Donovan germinated the idea in Summer of 2008 and got the project formally endorsed and instituted as an affiliate of the Doctoral Students’ Council in Spring of 2009. OpenCUNY (@OpenCUNY) Commons In A Box. Viewcontent. CUNYfirst’s Breakdown. By Shomial Ahmad and Peter Hogness CUNYfirst, the University-wide computer system that handles everything from course registration to employee pay, promises on its homepage that you can sign in to the system “from anywhere, anytime.” 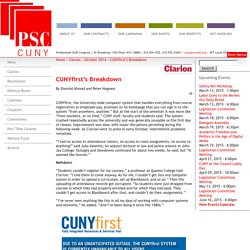 But at the start of the semester it was more like “from nowhere, at no time,” CUNY staff, faculty and students said. The system crashed repeatedly across the university and was generally unusable on the first day of classes. Improvement was slow, with major disruptions persisting during the following week. As Clarion went to press in early October, intermittent problems remained.

“I had no access to attendance rosters, no access to room assignments, no access to anything!” Meltdown “Students couldn’t register for my courses,” a professor at Queens College told Clarion. “I’ve never seen anything like this in all my days of working with computer systems and networks,” he added. “Admissions were affected,” a longtime CUNY faculty member told Clarion. @CUNYfrist Keeps It Unreal. By Clarion Staff When the CUNYfirst system went through a complete meltdown at the start of the Fall semester, it was hard to get information about what was going on. 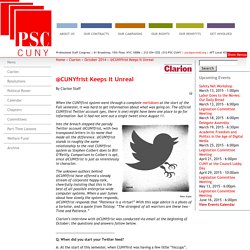 The official CUNYfirst Twitter account (yes, there is one) might have been one place to go for information– but it had not sent out a single tweet since August 11. Into the breach stepped the parody Twitter account @CUNYfrist, with two transposed letters in its name that made all the difference. @CUNYfrist stands in roughly the same relationship to the real CUNYfirst system as Stephen Colbert does to Bill O’Reilly. Comparison to Colbert is apt, since @CUNYfrist is just as relentlessly in character. The unknown authors behind @CUNYfrist have offered a steady stream of corporate happy-talk, cheerfully insisting that this is the best of all possible enterprise-wide computer systems. Clarion’s interview with @CUNYfrist was conducted via email at the beginning of October; the questions and answers follow below. A: It’s easy! Response to Clarion query on CUNYFirst. [Editor's note: Below is a Clarion question on the CUNYfirst breakdown at the start of the Fall 2014 semester, and the response from CUNY's Office of Communications and Marketing. 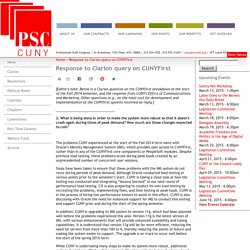 Other questions (e.g., on the total cost for development and implementation of the CUNYfirst system) received no reply.] 2. What is being done in order to make the system more robust so that it doesn't crash again during times of peak demand? How much are those changes expected to cost? CUNYfirst, Users Last. By David Arnow, Professor of Computer & Information ScienceBrooklyn College [What’s your experience with CUNYfirst? 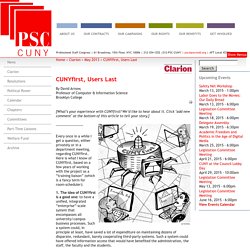 We’d like to hear about it. Click "add new comment" at the bottom of this article to tell your story.] Every once in a while I get a question, either privately or in a department meeting, regarding CUNYfirst. A CUNYfirst Upgrade Is Delayed, But Other Changes Are Complete. By Peter Hogness After the CUNYfirst computer system crashed repeatedly at the beginning of Fall semester, CUNY officials identified three main steps for preventing such problems in the future. 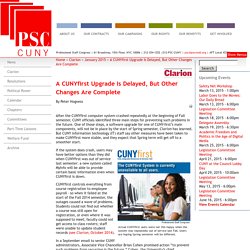 One of those steps, a software upgrade for one of CUNY-first’s main components, will not be in place by the start of Spring semester, Clarion has learned. But CUNY information technology (IT) staff say other measures have been taken to make CUNYfirst more stable, and they expect that Spring term will get off to a smoother start. If the system does crash, users may have better options than they did when CUNYfirst was out of service last semester: a new system called MyInfo will be able to provide certain basic information even when CUNYfirst is down. Introducing CUNYfirst. CUNY Fail (@CUNYfail) #CUNYfirst? CUNYfail. CunyFirst Interviews.