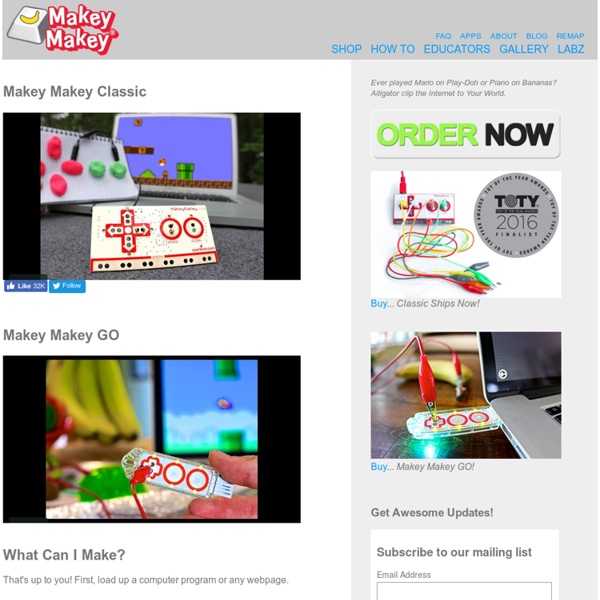 What Can I Make? That's up to you! First, load up a computer program or any webpage. Let's say you load up a piano. Then, instead of using the computer keyboard buttons to play the piano, you can hook up the MaKey MaKey to something fun, like bananas, and the bananas become your piano keys Or let's say you Google for an online Pacman game and draw a joystick with a pencil:

Coding e didattica Upload Barbara Bevilacqua Loading... Working... ► Play all Coding e didattica What Makes an ‘Extreme Learner’? By Jane Mount/MindShift By Linda Flanagan When Mollie Cueva-Dabkoski was dissecting a sheep’s heart during an eighth-grade science class, she had an epiphany that changed her life. “That heart told the story of anatomy and physiology!” Digitally Interfaced Book: Paper, Graphite, Makey Makey, Scratch, and Imagination As a professional artist, deepening the ways in which seemingly disparate objects and processes are interconnected through locating, and mapping their intersections has been one of the main elements of my studio practice. The Fab Lab tools and working processes create an environment that is well suited to investigating those types of intersections. In an effort to integrate Fab Lab tools centered on craft, and studio-based processes into the classroom, I have been working to implement a Mobile MakerCart at a project-based K-8 charter school. In addition to introducing craft-based physical computing projects to the children, a guiding principle behind the MakerCart is to give teachers the opportunity to develop familiarity with the MakerCart’s tools and processes in order to be able to envision the ways in which they might be able to develop their own curriculum for use in the classroom.

GeoShred - Wizdom Music GeoShred MIDI It’s Not Just An App, It’s An INSTRUMENT!" Wizdom Music & moForte announce the release of GeoShred Version 2, an exciting update to the award-winning GeoShred musical instrument for iPad, now with MIDI/MPE support. GeoShred, Winner of a 2017 Electronic Musician Editor’s Choice Award as “one of the most innovative, groundbreaking products to emerge in the past twelve months”, has been enhanced with unprecedented MIDI/MPE I/O control, new effects, and additional model control parameters. GeoShred is highly expressive when controlling, and being controlled by, instruments that use the upcoming “MPE” MIDI specification (MIDI Polyphonic Expression). It’s both a powerful synth and a formidable iPad based MIDI/MPE controller!

Hummingbird Robotics Kit Attaching parts to the Hummingbird gear motor can require some creativity. We have two solutions that help: Order or 3D print an adapter piece Offline · google/blockly-games Wiki Got limited or unreliable Internet? Download a full copy of Blockly Games using the links below. Choose your language (3MB compressed, 5MB uncompressed): Unzip the downloaded file and open index.html in a web browser. The games can be distributed on an intranet, CD, USB drive, or any other storage media. Limitations

Massive Veg Attack: Makey Makey + Fruits, Vegetables = Music Call it a massive attack of fruits and veg. Simple circuits have long been able to make use of sensors in real-world stuff like apples or JELL-O. But Make Makey deserves special credit for making interfacing those circuits with a computer silly-simple. (The project grew out of research at MIT Media Lab’s Lifelong Kindergarten; to get a small sense of how much is involved in getting an idea like this off the ground successfully, check out the incredible list of men and women who contributed on the about page.) SampleWiz - Wizdom Music Listen...Record...Create... In creating SampleWiz, we wanted to create something that would appeal to the sonic explorer in all of us. Creating a sampler for the iOS devices was a great opportunity for us to push the boundaries of what normally happens on a sampling instrument.

Build Your Own Blocks (Scratch Modification) The BYOB logo. Build Your Own Blocks — often referred to by its acronym, BYOB — is a modification of Scratch, made mainly by the users Jens and bharvey. It includes many features that are not available in Scratch without many large modifications to the source code (see Shift-Click-R for details) — these range from building your own blocks to Mesh. 10 block demos for Scratch Sean McManus shares some 10 block demos that demonstrate popular techniques in Scratch When I first started programming on the Amstrad CPC computer, magazines used to publish short listings. People could use them to learn how to program, and as building blocks for their own programs. One of the magazines had a feature called 10-liners, where programmers were invited to show what they could do in 10 lines of Basic. I thought I'd see what I could do in up to 10 blocks of Scratch, and created a series of program cards.

Dissecting the Un-Makerspace: Recycled Learning It starts with a twist, a squeak, and a cheer. Watch out, 1980s cassette player, broken computer mouse, old monitor -- my fifth graders and I are looking for you! Your future doesn't hold a dumpster in it, at least not yet. You, my memory of past innovation, get a second life.

Makey Makey Will Make You Love The "Internet Of Things" Ever wanted to wake up in a Disney cartoon where everything around you is animated and interactive? Now you can...Turn a bunch of bananas into a piano. Turn your friends into a synthesizer. Turn a trampoline into a slideshow controller. Turn your hand into a game glove. Makey Makey is a little circuit board that comes with a set of alligator clips.