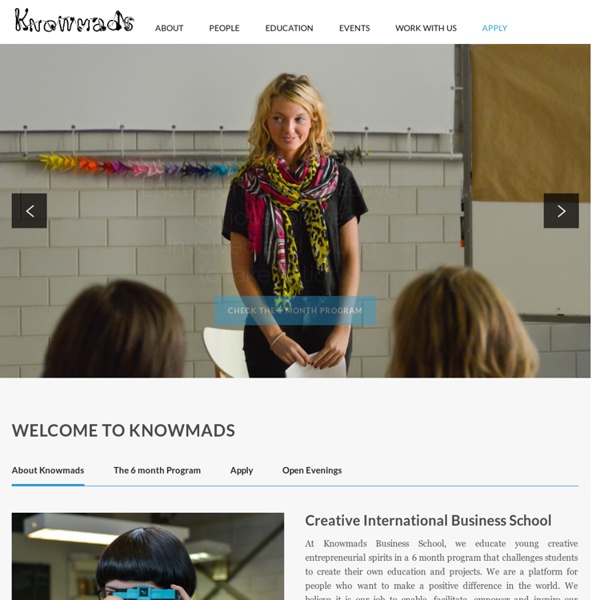 Claus Meyer : Melting Pot Foundation In June of 2011 we established Melting Pot, which is a charity foundation with the purpose of improving the quality of life and the future prospects of vulnerable and disadvantaged populations in Denmark and in selected developing countries. We want to make this happen through activities that have food and food craftsmanship as well as entrepreneurship as their prime elements. A special ambition of the foundation is to help children, young people, persons with a criminal record, refugees and immigrants by developing – and maybe also taking part in the management of – companies or institutions, that are engaged in education, communication, production or commerce in the field of food and meals. As of writing Melting Pot has made three essential steps: The launch of a cooking school for poor children from the slums of Bolivia'scapital La Paz – in collaboration with IBIS. DO YOU WANT TO HELP US HELP OTHERS?

Educación Mínimamente Invasiva "que debería estar marcado Library girls Originally uploaded by dcolson5201 Let me take you on a short journey. Cross-Pollination #GameShifting The Project Cross-Pollination Night :: July 30, 2012 Kyle Spending time: researching and looking deeper into his questions around polymaths, hyper-specialization, renaissance people, and more, with an intention that is growing around the word "nexus" as a working project title. Barriers: The weight of his past experience, his high sensitivity to his environment (reading too far into things, other stuff like that) Quotes: "I'm just trying to be present to our process. I know that I'm not back where I was."

Permission to Play: Let's Make Fixing Things Cool Again Yellowed kitchen appliances, dust-streaked radios, unresponsive DVD players: the table was strewn with stuff that even a local thrift store’s discounts couldn’t make enticing. Most of the electronics were broken and all of them had outlived their usefulness. But you wouldn’t have known it by the number of children—screwdrivers in hand—who crowded the table that day just to get a look inside of them. The demographic at the last USA Science and Engineering Festival was a little different from the one I usually cater to at iFixit—a free online repair manual for everything from cracked iPhones to DIY oil changes. My company’s mission is to teach as many people as possible how to fix the stuff they own—kids included. And kids were just as eager to learn as we were to teach them.

IDEO’s Culture of Helping Artwork: Freegums, Celestial Plane, 2010, fully tileable ink drawing, 24″ x 36″ Few things leaders can do are more important than encouraging helping behavior within their organizations. In the top-performing companies it is a norm that colleagues support one another’s efforts to do the best work possible. That has always been true for pragmatic reasons: If companies were to operate at peak efficiency without what organizational scholars call “citizenship behavior,” tasks would have to be optimally assigned 100% of the time, projects could not take any unexpected turns, and no part of any project could go faster or slower than anticipated.

8 Great Tools to Create Webinars Online One of the pluses of technology in education is the fact that it liberated the notion of formal instruction and destroyed its confining walls. There is an emerging breed of teachers nowadays who no longer accept the notion that the classroom is necessarily contained within four walls. They use social media and telecommunication technologies to globalize their instruction and extend their teaching to everywhere in the world. Such breed of teachers are called global educators and they are using a wide range of technologies in their work most important of which are web conferencing and webinar ( web seminar ) making tools. As for the former, Educational Technology and Mobile Learning has already published 7 best web-conferencing tools for teachers.

Any Signifigantly Advanced Communication is Magic. You don't need language to communicate. It's dogma that language and communication are the same thing. Any action you carry out communicates something. "A gesture, a hairstyle, almost anything. Sure, language behaviour also communicates something." "Beyond that, almost all language is not involved in communication. 4 Lessons From The Social Innovation Hotbed Of Brazil Last year, I moved from New York to Rio de Janeiro, where Purpose has opened its first overseas office. I have met with local innovators and interacted with all kinds of people on the streets, at the beach, and in botequins (informal bars). These experiences have all enriched my work in social innovation. Besides stimulating my creativity, immersion in a different culture and working in a foreign language have heightened my sense of mindfulness and empathy, reminded me of the virtue of humility, and taught me a few things about what it means to innovate. Here are some lessons I have learned:

Sunfeed Superstreams : Education Exploded If you’ve ever seen grainy old sports footage—for example, a boxing match from the late 1800s, a Princeton/Yale game from 1903, or Babe Ruth’s famous home run from 1932—you probably noticed something: how different the game looks, compared to its modern counterpart. The equipment looks too clunky, the uniforms impossibly baggy. Even the bodies of the players look weirdly out of shape. Why is that? Like any human endeavor, sports evolve over time.

The Reshoring Initiative: Welcome About Us The Reshoring Initiative, founded by Harry Moser in 2010, is an industry-led effort to bring manufacturing jobs back to the United States. The initiative works with U.S. manufacturers to help them recognize their profit potential as well as the critical role they play in strengthening the economy by utilizing local sourcing and production. American companies often don't consider all of the costs involved in sending their manufacturing offshore, such as inventory carrying costs, traveling costs to check on suppliers, intellectual property risks and opportunity costs from product pipelines being too long. LMS - Aula Virtual In September 2012, Skillsoft acquired MindLeaders, bringing together two leaders in learning-offering you comprehensive, targeted learning assets that cover key business issues such as leadership development, IT certification support and talent management. This integration also means organizations in the U.S. can turn to Skillsoft for a wide range of compliance needs including legal, food services and ES&H. Organizations in the U.K. can leverage Skillsoft resources to address their hospitality and adult social care compliance needs. This is an exciting time to be in the learning industry.

Infrastructure for Creating Thriving Communities What would it make possible if every community around the world had infrastructure dedicated to ensuring the best possible quality of life for everyone? That question has been on our minds a lot lately, as we have thought about what it will take to accomplish Creating the Future’s mission in the 10 years we have given ourselves. To understand this in context will require that we step back a bit. So before we begin this exploration, some background.